Racing driver for Jaguar and winner of the 1951 Le Mans 24 Hours Race with Peter Walker in a Jaguar C-type. 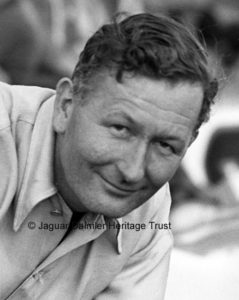 He had a successful career from 1937 until his untimely death in 1958.  He entered 75 races, with 5 wins, 6 second places and 7 third places and partnered Duncan Hamilton, Stirling Moss, his half-brother Graham and Peter Walker among others.

This brief biography only covers some career highlights and his races in Jaguars.

Peter Nield Whitehead was born in Yorkshire in November 1914 and came from a wealthy background.  This gave him the means to follow his passion for motorsport, allowing him to start his racing career at the young age of 19, by racing locally in a Riley.  The following season, after switching to an ERA B-type, he scored the first major result for Geoffrey Taylor’s Alta firm, finishing third in the Limerick Grand Prix, a Formula Libre race.  He once again finished third in the 1936 Donington Grand Prix, sharing his ERA with Peter Walker.  This pairing would prove to be rather successful in future years.

Whitehead took his ERA on a business trip to Australia, where he scored his first major victory, winning the 1938 Australian Grand Prix at Bathurst.  During World War II he served in the Royal Air Force and once hostilities ceased, he was back in competition, taking his ERA to second place in the 1947 British Empire Trophy on the Isle of Man.

The following year, Whitehead survived a plane crash at Croydon Aerodrome on his way to arrange the purchase of a Ferrari 125, but due to his injuries he was out of racing for a year.  In 1949, he became the first person to whom Enzo Ferrari ever sold a Formula One car: a Ferrari 125.  With that same Ferrari painted green, he also became the first Englishman to win a major international motor race outside of the United Kingdom since Richard Seaman, another great pre-war Grand Prix British driver, winning the Velká cena Československa race.

Whitehead’s first attempt at Le Mans was in 1950 in a Jaguar XK120 with John Marshall, one of three XK120s entered by Jaguar, finishing 15th.  He fared better at the Tourist Trophy race in Dundrod, Northern Ireland in September coming second behind Stirling Moss, also in an XK120. 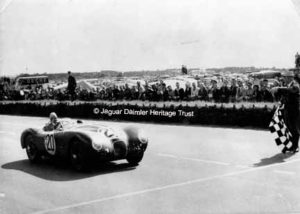 In early 1951 Whitehead, along with Stirling Moss, Soapy Sutton and Peter Walker, helped Lofty England with the test driving of the new Jaguar C-types being developed for the Le Mans 24 hour race.  This meant they were all experienced in the C-type by the time they reached Le Mans.

The 1951 Le Mans, Whitehead’s second Le Mans outing, was one of the biggest wins of his career, sharing his C-type, chassis XKC 003, with Peter Walker.  The other two C-types of Fairman/Moss and Biondetti/Johnson both went out with oil pressure problems caused by a broken oil feed.  Walker/Whitehead had built up enough of a lead to allow them to ease off slightly and avoid the same problem.

This was Jaguar’s maiden attempt at Le Mans in a C-type, finishing 9 laps ahead of the 2nd place Talbot-Lago  at an average speed of 93.112 mph.  Sir William Lyons is reported as saying some years later “My proudest moment was in 1951 when my Jaguar first won the Le Mans 24 hour race.  It was the first time a British car won since the Bentley days.”

Whitehead was one of the drivers in Jaguar’s ill-fated 1952 Le Mans race when the modified C-types all failed with overheating problems.  1952 didn’t get any better for Whitehead as during his final race of the season, the 9 hours at Goodwood with Ian Stewart in XKC002, he came off the track at Madgwick Corner and did not finish. 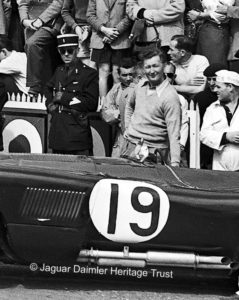 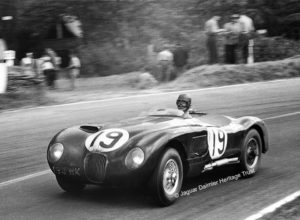 Jaguar redeemed themselves in 1953 taking 1st (Rolt/Hamilton), 2nd (Moss/Walker) and Whitehead coming 4th again paired with Ian Stewart in XKC 052 – all in disc brake equipped C-types.  This was often talked about as Jaguar’s secret weapon.

Jaguar weren’t actually quicker than the competition, they could just brake harder and later than the others.  At the end of the Mulsanne Straight they could brake 100 yards later than anybody else.  Half way through the race the Jaguar’s average speed was faster than the previous year’s lap record.  This was the first time that the average speed for the whole race exceeded 100 mph.

All four Jaguars entered for the race finished, with the Belgian entered C-type for Ecurie Francorchamps, driven by Roger Laurent and Charles de Tornaco finishing 9th.

In addition to Le Mans, 1953 was a good year for Whitehead, coming 1st in the 12 hours race at Hyères in June with Tom Cole in XKC 039.  He shared a victory with Stirling Moss in the Reims 12 Hours in C-type XKC 012 in July and 3rd in the 9 hour race at Goodwood in August with Ian Stewart.

In March 1954 Whitehead and new team driver Ken Wharton were driving the prototype light alloy car XP/11, testing the new Dunlop ‘Stabilia’ steel-belted, low-profile, radial tyres at Reims.  These tyres outlasted the 1953 tyres by a factor of nearly three to one meaning they should only have to change tyres twice at Le Mans that year instead of six times. 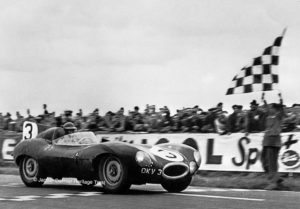 For Le Mans 1954 Jaguar had moved on from C-types to the new D-types but Whitehead and Ken Wharton in XKC 404 did not finish the Le Mans race, retiring with fuel problems.  However they went on to win the 12 hours at Reims only 3 weeks later and then the pair were placed sixth driving XKC 403 in the RAC Tourist Trophy road race in Dundrod in September.

For 1955 Jaguar organised a driver selection test session at Silverstone.  Whitehead thought it unlikely he would be picked and went off to Australia.  His only Jaguar race in 1955 was a DNF, in Duncan Hamilton’s D-type, at the 9 hours race at Goodwood with Michael Head.  He fared only slightly better in 1956 with a best finish of 6th in the Swedish Grand Prix at Kristianstad in his half-brother’s D-type.  The following year saw him spend most of his time racing Aston Martins with a single entry in his half-brother’s Jaguar XK150 in the September Tour de France where they failed to finish.

Whitehead’s last great performance was at the 1958 Le Mans 24 Hours race, where he finished second in an Aston Martin DB3S, co-driving with his half-brother Graham.

Whitehead lost his life during the Tour de France race on 20th September.  With Graham at the wheel, their Jaguar 3.4 saloon (Mark I) crashed off a bridge into a 30-foot ravine, after overturning twice.  Graham escaped with serious but non-life threatening injuries, but sadly Peter Whitehead was killed instantly – aged only 43.

For Jaguar owners Peter Whitehead will always be remembered for Jaguar’s first Le Mans win in 1951 with Peter Walker.