A Life in the Fast Lane 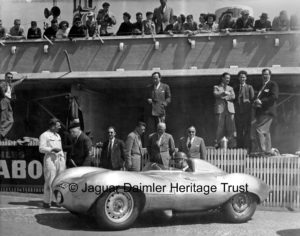 One of the great characters of the motor racing scene during the 1950s had a distinguished war record and close ties with Jaguar Cars.

Major Anthony Peter Roylance Tony Rolt, MC and Bar, was born on 16 October 1918 at Bordon in Hampshire and brought up at St Asaph in Wales.  He was educated at Eton, where he got into trouble for keeping a car, then went to Sandhurst before being commissioned into the Rifle Brigade.

By the late 1930s Rolt was already making his mark in motor racing, having made his debut in 1936, when he shared a Triumph Southern Cross with Jack Elliott in the Belgian Spa 24-Hours.  He drove there because he had just lost his British driving licence for speeding in Denbigh High Street.  Still aged 19, Rolt raced an 8-cylinder Triumph Dolomite before acquiring the ERA Remus from the Old Etonian Siamese Princes Chula and Birabongse (the latter better known as Prince Bira and a Jaguar driver).

Tony Rolt took two first and two second places in the Coronation Trophy races at Donington Park; a second at Crystal Palace; and another at Phoenix Park, Dublin.  However, his army commitments limited his racing and he sold a half-share in the ERA to St John Jock Horsfall.

During World War Two, Rolt was a lieutenant in the Rifle Brigade and in 1940 was awarded the Military Cross during the defence of Calais.  He was then taken prisoner of war following the fall of France, and after persistent escape attempts was sent to Oflag IV-C in Colditz Castle, where he was involved in the audacious glider escape plan with the late Bill Goldfinch.   For his determined escape attempts, Rolt was awarded a Bar to his Military Cross.

After the war Rolt resigned his commission with the rank of Major, to pursue a career as a racing driver.  On 14 July 1945, Rolt and Horsfall shared their ERA in British motor sport’s re-emergence at Cockfosters.  In 1946 he won the Brussels Bois de la Cambre in an Aston Martin.  He also drove an Alfa Romeo ‘Bi-Motore’, an ERA-Delage and a Nash-Healey.  In 1950, he shared the 4th place Nash-Healey at the Le Mans 24-Hour race with the extrovert, Duncan Hamilton.

Tony Rolt also took part in the 1950, 1953 and 1955 British Grands Prix, all of which ended in retirement.  The 1950 GP which was the first of the Formula One Championship saw him start 10th on the grid, only managing to complete four laps before the gearbox of his ERA E Type 6 failed.  In 1953, driving Rob Walker’s 2-litre Connaught A Type 4, his half shaft let go after 70 laps.  Again he started 10th on the grid.  His final Formula 1 outing was in 1955, again driving a Rob Walker Connaught, this time a 2.5 litre B Type 4, and as in 1950 sharing the car with Peter Walker.  This time they started 14th on the grid only to be let down by the throttle after 18 laps.

However, Tony drove with great success in many national events with Rob Walker’s Delage in 1951 and, in his only HWM drive, taking second place in the 1952 International Trophy behind team-mate Lance Macklin.  Between 1953 and 1955 he drove Rob Walker’s Connaught to numerous victories in Formula Two, Libre and handicap races.

The Jaguar stable won the Le Mans 24 Hours in 1951 with their new C-type driven by Peter Walker and Peter Whitehead, while Rolt had achieved 6th place again with Hamilton in the Nash-Healey.  This led Jaguar to offer him the position of reserve driver for the Dundrod race in Ireland.  When the works driver retired feeling ill halfway through, Rolt took over to break the lap record and finish fourth, winning him a permanent place in the Jaguar team in 1952.  The following year, 1953, he paired again with Duncan Hamilton and won the Le Mans 24-hour race in the disc brake equipped, works C-Type.  In 1954 the same two drivers took second place at Le Mans and in the Reims 12 Hours driving Hamilton’s private entry Jaguar D-Type.

Rolt retired from racing in 1955 and joined Harry Ferguson Research Ltd.  He was involved in the development of early four-wheel drive systems for racing cars and sports cars such as the Jensen FF.  Rolt designed a four-wheel drive Grand Prix car in 1961, known as Project 99.  Designed primarily as a high-speed research vehicle and powered by a front-mounted 4-cylinder 1.5 litre Coventry Climax engine, it was driven to victory in a wet International Gold Cup race at Oulton Park by Stirling Moss who also drove in the 1961 British Grand Prix at Aintree after his Lotus’s brakes failed.  In the event the Rob Walker-entered P99 was black-flagged for a push-start.

In 1971, Rolt formed his own company FF Developments at Coventry.  His son, Stuart, later became the Chief Executive of the company which designed and developed the AWD system used on the Jaguar XJ220 supercar prototype that was shown for the first time at the 1988 British International in partnership with FF.

Tony Rolt shunned publicity, whether about the war or motor racing and he avoided Colditz reunions; once saying “Escaping was not a game. Nor was it fun. It was a duty.”

He died on 6 February 2008, aged 89, his wife Lois and one daughter predeceased him; two sons and another daughter survive him.