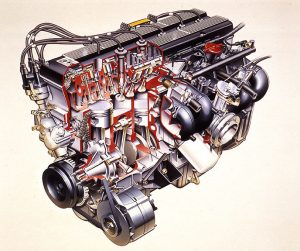 Over the years, since its introduction in 1948, a replacement for the XK engine was always in consideration by the engineering team.  In 1966 Bob Knight issued a memorandum for a six-cylinder three-litre production engine for use in the Jaguar XJ4 (later the XJ6 saloon).  Though it was considered by Lofty England and William Heynes, nothing further appears in the archives about this proposal.  Meanwhile, the V12 was progressing and six-cylinder variations on the design were being considered.

Of these variations, two stand out: one was to halve the V12 crosswise and make a V6, and the other was to split it lengthwise to make an in-line six-cylinder engine.  However, this method gave a capacity of 2,672 cc, which was too small to be considered as a replacement for the XK engine.  The V6 was dismissed but the in-line idea was taken up and development, of sorts, commenced.  Within the engineering department the engine was referred to as the ‘slant-6’ because a lengthwise half of the V12 was in effect an in-line six-cylinder engine leaning over at 30 degrees.  While this may seem a bit odd, it made sense to retain the ‘lean’ rather than sitting the engine upright; by doing so, the existing machine tools for the V12 could be used, with half the machining tools making the six-cylinder block while the other half made a ‘blind’ pass.  Also, the fact that the engine leaned over meant a reduced overall height allowing a lower bonnet line.  By the late 1960s progress had been made on the ‘slant-6’ and by now the capacity had increased to 3,590 cc.

Work on producing a running prototype commenced and by November 1972, a slant 6 engine was tested in a vehicle, recording 150 bhp at 4,500 rpm and 171 bhp at 5,500 rpm.  Walter Hassan, who had been leading the development team with Harry Mundy, retired from Jaguar and left Mundy to carry on with the engine.  Ron Burr joined Mundy on the engine design, which now had the unit at a slant of 15 degrees from the vertical rather than 30 degrees.  It was found that the new angle gave sufficient under-bonnet clearance without creating access problems to the underside of the engine.  Though the records are unclear, it would appear that it was around this time that the name “Advanced Jaguar Six-Cylinder” or “AJ6” was applied.  The advances included a light alloy block (the XK block was cast iron) and chain drive in place of a toothed belt for the twin overhead camshafts.

Several examples of the new engine began to take shape in the Engineering Department but it was not until 1979 that a complete 24-valve (4 valves per cylinder), twin-overhead-cam, 3.6-litre AJ6 unit was ready to be bench tested.  Harry Mundy retired from Jaguar soon afterwards and Jim Randle was appointed Director of Production Engineering.  He had long been with Jaguar and had worked on several projects, including the AJ6, so this was a natural progression; he was joined by another Jaguar stalwart, Trevor Crisp as Power Unit Chief.  Their task was to lead the team into making the AJ6 a production engine. 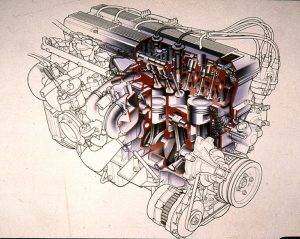 The new Jaguar management under (Sir) John Egan were able to obtain funds from the Conservative government to develop new products.  Egan secured £21 million alone for production of the AJ6 engine; £6 million was allocated to the single transfer line for machining the aluminium cylinder block at the Radford factory, where it was planned to manufacture 1,000 units a week.

Delays were experienced in getting the engine into quantity production by the evermore stringent North American exhaust emission regulations.  Also, suppliers had to overcome the problem of supplying strong and accurate aluminium cylinder blocks and heads.

The new engine was intended to power the successor to the XJ6 Series 3 saloon but that was still some way off, so the engine was unveiled in 1983, in 3.6 litre form, as an option to the V12 for the XJS.

It was a happy coincidence that the XJS Cabriolet was also introduced at the same time and this became the launch car. 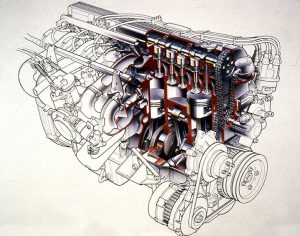 The engine was subjected to continuous development and refinement through the following years and by the time the new XJ6 (XJ40) was introduced in 1986; it was a real thoroughbred power unit.  The XJ40 was also offered with a 2.9 litre version of the AJ6, which had the same bore of 91 mm but with the stroke reduced to 75 mm, giving a capacity of 2,919 cc.  The cylinder head of the 2.9 litre engine was different and more akin to the V12 head, which meant that the Radford plant could machine the head on the V12 line.  Separate fuel injection and ignition systems manufactured by Bosch were fitted to the 2.9 litre engine, and the 3.6 litre unit was now fitted with an integrated engine management system from Lucas.

For the 1989 line-up, the XJ40 was much-improved and the 3.6 litre engine enlarged to 4.0 litres.  To achieve this, the stroke was lengthened from 92 mm to 102 mm increasing the capacity to 3,980 cc.  The engine also featured revised cam profiles, tappets and a better exhaust downpipe system.  A new engine management system was also developed for the engine.  When Jaguar was bought by the Ford Motor Company, the 2.9-litre engine was replaced with a much better 3.2-litre version; this was effectively a 4.0 litre engine with the same bore but with a shorter stroke of 83 mm to give a capacity of 3,239 cc.

The first Ford-managed vehicle after the take-over was the X300 and the Jaguar engineering team had further developed the AJ6 so it was given a new designation as the AJ16.

This engine retained the same dimensions and capacities, so that it would fit into the X300 engine bay and would continue to use the existing tooling.  In all, some 100 modifications had been made to the engine and various components including: revised inlet and exhaust ports, new cams with higher cam lift and a compression ratio of 10:1.

Other changes included a new cylinder head, lighter pistons, coil-on-plug direct ignition, lighter valves and, most importantly, the use of a General Engine Management System (GEMS).  This allowed fully sequential fuel injection and advanced engine sensing making the AJ16 much smoother than the AJ6.  Though the engines remained at 3.2 and 4 litres, the modifications gave them more peak power and the 4 litre gave a top speed (non-supercharged) of 145 mph. 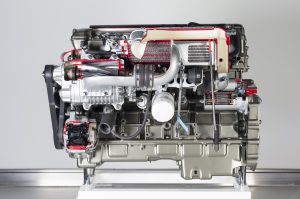 The AJ6 had been fitted with an Eaton M90 Roots-type supercharger and the 4.0 litre AJ16 took the unit with minor modifications.  This gave the XJR a 0-60 mph of 5.9 seconds and a top speed (governed) of 155 mph.  A similar supercharged version was made of the 3.2 litre AJ16 but this was for Aston Martin, by now part of the Ford stable, rather than for Jaguar.

Unlike the XK engine the AJ6/16 was only in production for 14 years, finishing in 1996, and was the last in-line six-cylinder engine from Jaguar.