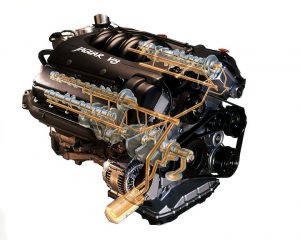 The first production V8 from Jaguar replaced both the 6-cylinder AJ16 and the V12 engines following its launch in the XK8 in 1996 and subsequent use in the XJ8 in 1997.  The engineers at Jaguar had flirted with V8 configurations in the past but in the late 1980’s they started to investigate options to replace both the AJ6 and V12 and also to be able to have engines suitable for smaller cars in order to be able to expand the companies range in the future.   Many options were considered, including a new small inline 6 design but the ideas evolved towards a family of V6, V8 and V12 to both replace the existing engines and to be ready for new smaller cars.  An important consideration was to make the engines shorter to be ready for future crash regulations.

The new programme was given the designation AJ26 (6+8+12=26).  Following the purchase of Jaguar by Ford, the project was carefully re-evaluated and the decision taken to proceed but only with the V8 version at that time.  This took shape as a Double Over Head Camshaft (DOHC) 90-degree unit of 4.0 litre capacity and in late 1992 the Ford and Jaguar boards had given approval for the unit to be produced.  Ford assigned a dedicated building at their Bridgend plant, in Wales, to manufacture the Jaguar “AJ-V8”.   This decision meant the closure of the engine plant at the former Daimler works at Radford in Coventry.

The first prototype engine was assembled late in 1991 and fired up on the 4th November.

Trevor Crisp and David Szczupak led the team which made the V8 into a compact unit which was carefully designed to  fit into the existing X300 saloon and its proposed successor.  It would also fit into the sports car then in design from Fergus Pollack, Keith Helmet and Geoff Lawson.  Jaguar’s ground-breaking new V8 was an all-alloy unit, which kept weight down to a minimum.  The engine featured: fracture-split forged powder metal connecting rods, hollow one-piece cast camshafts and a reinforced Polyamide composite plastic intake manifold, which was light and provided  thermal insulation.  This enabled Jaguar to accommodate an integral fuel rail into the manifold, reducing complexity and improving hot fuel handling.

Interestingly, the Jaguar engineers stayed with the valve operation system they knew best, having already used it with previous engines.  This meant direct operation with aluminium bucket tappets beneath the cams with shim clearance adjustment.  The valve gear was extremely light but with large valve sizes to give low friction and good breathing for high power.  Proven chain-drive for the camshafts was chosen – years of experience with the V12 and AJ6 showed them to be durable and compact and avoided the need for the servicing needed with a cam belt.  Variable timing actuators were fitted to the inlet camshaft sprockets to improve the spread of torque through the rev range, reduce emissions and improve fuel economy.  Jaguar chose ‘Nikasil’ plated cylinder bores.  Once in production it was found that the plating was subject to attack from low-grade, high-sulphur, fuels and some engines had to be replaced under warranty.  The plating was later replaced with cast-in iron linings.  The twin cylinder heads were produced by Cosworth exclusively for Jaguar.

A substantial aluminium bedplate, carrying the cast sump, was used to close off the lower end of the engine block which gave the bottom end great strength.  The five-bearing crankshaft itself was made from spheroidal graphite cast iron and is extremely strong.  A new, Jaguar patented, split coolant flow, from the water pump, delivered 50 per cent of the coolant into a gallery, bypassing the bores, to the cylinder heads at the rear of the engine.  This then mixed with the remaining 50 per cent of the coolant to cool the cylinder heads.  This proved efficient and gave the AJ-V8 a fast warming-up time of under four minutes.

Work continued on testing the AJ-V8, in modified XJS sports and X300 saloon models, and by 1996 the trials were over and the engine ready for production.  The unit had taken five years, and cost some £200 million to develop, by the time it was introduced in 1996 in the XK8 sports car.  This gave Jaguar a new image and one that made up for the years of wilderness under British Leyland.  Production commenced in May 1996 and within a month some 35 units were being manufactured daily. 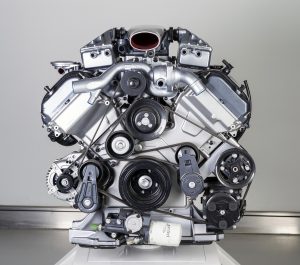 AJV8 with Supercharger on display in the Collections Centre in Gaydon

Jaguar researched both turbocharging and supercharging in the late 1980’s and having evaluated both,  decided the latter was better because it provided immediate response to throttle openings and achieved high boost levels at low and medium speeds without the ‘Turbo-lag’ which is present in the alternative.  This led to the supercharged AJ16 engine for the XJR in 1994 which received an excellent reception for that car from both the Press and customers.  This meant that it was then natural that the AJ-V8 was given the same treatment.  Jaguar found that the V8 was an excellent platform for adding the Eaton M112 supercharger with it fitting perfectly in the V of the engine and providing the Effortless Performance the AJ26 aimed to deliver.

For the supercharged AJ-V8, new dished pistons (instead of flat topped) were fitted for a revised 9:1 compression ratio.  The pistons of high strength aluminium alloy were designed to resist high thermal and mechanical loads of the supercharged engine.  Other changes included: new crankshaft damper; new inlet cam sprocket (shared with  the 3.2-litre); new cylinder head gasket featuring stainless steel bore eyelets in place of mild steel; new intake system with a pair of intercoolers, one for each bank of the engine  and an improved intake with a larger inlet and an extra resonator to match the supercharger’s needs.  Running at 1,600 rpm the supercharged AJ-V8 was producing more torque than the naturally aspirated AJ-V8 at its optimum.  The supercharged engine did not use variable cam timing as the normal benefits of improved volumetric efficiency were not noticeable on the boosted engine.

In 2002, for the second generation AJ-V8, capacity was increased to 4.2-litres by increasing the stroke and reducing the diameter of the crankpin journals to maintain the same block height. 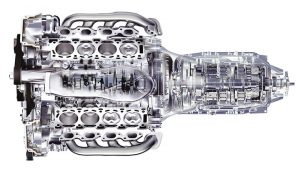 This engine was developed in parallel with a 3.5-litre variant,  only used the XJ8.  The 4.2-litre   version of the AJ-V8 was introduced for the XJ8 (X350), XK8 and S-Type initially and subsequently with further improvements in the XK (X150) in 2006 and the XF in 2008.  A revised supercharged engine was also introduced for these models.

Having Land Rover in the stable meant the AJ-V8, in an adapted form, could be used for the Discovery and Range Rover vehicles from 2005 onwards.  To meet the needs of these vehicles its capacity was further increased  to 4.4-litre for the naturally aspirated version but remained at 4.2-litre for the supercharged version.

Aston Martin, then part of Ford, hand-assembled in Germany a 4.3-litre variant in 2005 for use in their Vantage model.  This engine has a wide range of modifications including bespoke cylinder heads, cams, intake and exhaust systems and a dry sump system.  This was then updated to 4.7-litre variant in 2008 for a further performance increase.

Jaguar has continued to develop the AJ-V8 – naturally aspirated and supercharged – and has used the latest Gen III version (AJ133) in 5.0-litre form in the XJ, XF and the F-Type; also the special edition Project 7 uses the engine as do the Range Rover and Discovery models.