The Lyons Special (‘The Brontosaurus’)

The experimental car XP/11, chassis number XKC054 wasn’t the only experimental  incarnation on the C-Type theme.  There was another one, this time designed by William Lyons, known as the Lyons Special (but christened by some ‘The Brontosaurus’).

In the list of models recorded in the Jaguar archives is ‘chassis’ XKC301 Mark III; this follows immediately from the XKC201 Mark II XP/11, and is quite different.

Sometime in early 1953, William Lyons decided to build a streamlined sports-racer for possible competition alongside the C-Type, XP/11 and the emerging D-type.

The last was still confined to drawings and scale models by Malcolm Sayer and had yet to become a reality. Sayer had made several small wood models of various concepts that he had in mind.  It would be quite possible that Lyons, when he inspected the models, was encouraged to try his hand with a full-size streamlined car.

As usual, Lyons was assisted by Fred Gardner who built a wood frame or buck on which the all-enveloping body was attached.  What emerged in April 1953 was a car that strongly resembled a sketch artist’s idea of a futuristic sports model.  There is more than a little ‘Eagle comic’ in the way that the car is styled, with the body enclosing all four wheels – each was fitted with a removable metal spat – and with the driver seated quite high behind a small fairing and windscreen.  A second seat position, like the C-Type, was included alongside for the mechanic/navigator as required for some events. 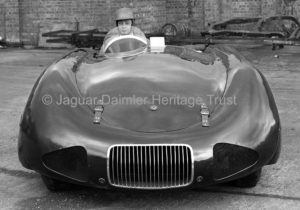 At the front there was a wide air intake grille with nineteen, thin, vertical bars surrounded by a heavy chrome frame.  This grille was a one-off and is unlike anything that Jaguar-Lyons had produced before, or since.

A Jaguar growler badge, taken from the XK120 or C-Type, was set into the wide engine cover, which was sealed and held down at the front by two leather straps on either side. This cover was not a hinged bonnet and was clipped into position at the scuttle above the rear of the engine bay.  Just below the front straps on each side was a wide mesh-covered aperture to give additional cooling to the engine and more importantly for the brakes. 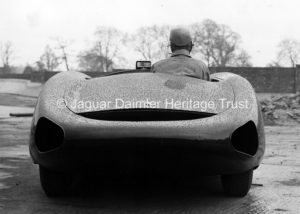 At the rear were similar air grilles aft of the wheels and what appears to be another vent-grille under the bootlid.

A working boot area was required for Le Mans and other events, like the C-Type it was small and held a spare wheel, jack and other tools to assist with a wheel change.

When completed the non-running concept – it was just a light aluminium body mounted on a wood wheeled frame, there was no chassis as such – was viewed by Lyons, who was obviously pleased with what Gardner and his team had produced.  The car was painted Jaguar Racing Green by Gardner and had to be moved around the workshop by hand.  Lyons decided he wanted it made into a running prototype and handed the project over to Phil Weaver, who now had the unenviable task of getting a static ‘display dummy’ capable of running at speed for Norman Dewis to test.  Weaver remembered that the shell was of ‘…very light grade aluminium sheet about 20- and 24 – gauge and not what we would use for an operational prototype.  The light metal was ideal for Fred to form the panels that Lyons wanted but not good for a road-going car.  We got it running but it was not an easy task.’

All this was carried out without William Heynes, the Chief Engineer, being informed.  One suspects that he would have found out that his key men were involved with something for Lyons but it would appear that he was not told on an official basis.  No memos are extant from Lyons to Heynes or anyone else for that matter about this exercise. 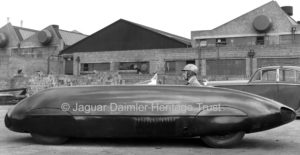 Work on getting ‘Mr Lyons’s two-seater’ – as it was termed – running, meant gathering equipment from all over the Jaguar plant.  Some unused C-Type frames were fitted and various XK120 bits found their way to the car which is sometimes also referred to as the ‘XK Special’ in the factory record books.  Power came from an XK engine; we do not have the type but it would be safe to say that it would have been a spare of surplus unit.

Weaver obtained wishbones and some suspension units from Austin at Longbridge and Lockheed two-leading-shoe brakes were fitted.  The exhaust system came from a C-Type and exited on the nearside in the same manner.  It was enclosed by the body and not exposed, as on the C- and D-types, a louvered section cooled the pipe.  Quite soon the Special was ready for testing, by now Heynes had been informed by Lyons as he needed Dewis, who worked for Heynes, to undertake the driving.

Norman Dewis recalls that he first drove the Special – unofficially and probably unkindly given the nickname ‘Brontosaurus’ by those working on it – on 15 April 1953.  He recorded 100 mph at 5,100 rpm on the nearby by-pass and found that it responded better than he expected.  “There was some transmission vibration at the higher revs and I found the gear change very stiff, the ride was hard, but then we did not have satisfactory suspension compared with the C-Type.  I remember when I first saw the car in Fred’s workshop with the front wheels enclosed I thought it must be just for straight-run record breaking, but Fred told me that it was what the Old Man (Lyons) wanted for Le Mans and other races.  Anyway, it was fitted with rack and pinion steering and when I turned the wheels to full lock the nearside front fouled the spat.”  Lyons would have seen the car running and may have wanted it to be tried alongside XP/11 that was ready for road-testing by May, but there is nothing in the archives to support this.

Jaguar was busy with the Le Mans C-Types for 1953 and both the XP/11 and the Lyons Special were stored until time was available to continue with testing the types once again. In the case of the latter it was taken to Gaydon airfield for some high-speed runs to test out its aerodynamics.  The Gaydon test track is still in use by Jaguar Land Rover today.  Norman recalls driving the Brontosaurus on 20 September 1953 up and down the main runway.  “We needed the wide space just to turn the thing around, the turning circle was not good and the spats did not help”.  Watching the tests were Lyons, Heynes, England and Harold Hodkinson of Dunlop.

When Dewis stopped after a few runs Lyons decided to try the car for himself.  He drove it at some speed to the end of the runway and then back again.  “I thought he was not going to be able to stop, as he went past the safe braking point we had marked before he ran out of runway, and the thing only had drum brakes.  Anyway he stopped just short of the end of runway, another few inches and he would have been in the grass, and he made a wide turn and brought it back to where we were standing.”  Lyons was pleased and smiling told Dewis that it was very good.  After his drive Lyons left the team to carry on testing the car and went back to work at Browns Lane. 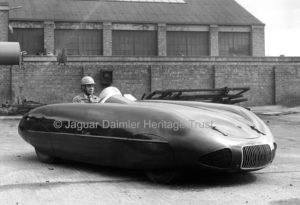 Following a break, when the car was checked and refuelled, during which the Jaguar team also relaxed for a while, it was time to resume.  Norman takes up the story:  “I do a few more runs, shut it off and then it gave one big back-fire – bang!

The next thing is, flames are coming out of the bonnet.  Fuel had come back through the carbs somehow, it ignited and up it went.  Well I jumped out and could not open the bonnet, which was a sealed lid, others also came up and we got the straps undone but the lid would not budge.  Then Harold Hodkinson grabbed a fire extinguisher and pointed it at the fire but nothing happened as the thing was empty!”  Eventually, they managed to get the cover off and smothered the flames with various cloths and overalls, but the  “…fire had burned quite a bit of the engine compartment. It went back to Fred Gardner’s shop on a trailer.”

Repairs were quickly carried out and just three days later the Special was taken to MIRA at Lindley.  Dunlop 6.50 x 16 tyres were fitted for the tests when Norman attained a straight-line speed of 107 mph before the off-side front spat worked itself loose and fell-off causing the tests to be halted for the day.

No records of further testing of the Lyons two-seater have come to light and it would appear that the car was stored in the Experimental Department, it appears in the 1955 list of cars in store, and it was also noted ‘in store’ at Lyons’s home Wappenbury Hall.  Soon afterwards the unusual streamliner was ‘reduced to produce’ and ceased to exist.

This interesting concept was just another facet of William Lyons‘ thinking about cars, he was not afraid to try something that was quite different and, if developed by Malcolm Sayer and the engineering team, may have become more than just an obscure footnote in Jaguar’s rich history.