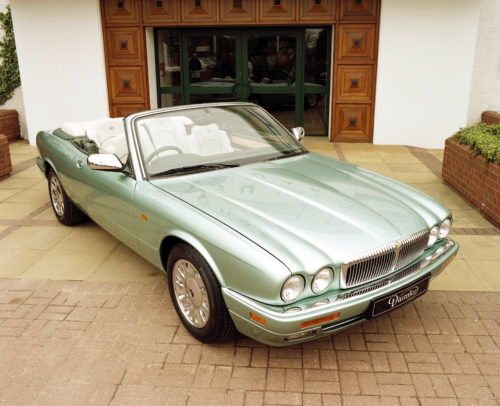 The 1996 Daimler Corsica is a one-off concept car that always turns heads wherever it appears.  To mark the centenary of Daimler Cars in 1996 Jaguar Cars revived an old name.

At a board meeting, where the upcoming one hundredth anniversary of Daimler was discussed, a decision was taken that this milestone should not go un-noticed.  Jaguar’s then Managing Director, Nick Scheele, decided that a special model should be commissioned which would encompass the Daimler name and Jaguar’s ability to mark the occasion in style.  The name ‘Corsica’ was chosen, as a link with the coachbuilder of that name and Daimler, for whom they supplied many a bespoke body.

Browns Lane, at the time, was the home of Jaguar’s famed Special Vehicle Operations (SVO) department; they made or adapted Jaguar-built cars to suit individual requirements and worked on show-models, as well as cars for the Royal Family and some government officials.  For example they could (and still do) provide armoured limousines for the British Prime Minister and for some export markets.  Their work is of the highest quality and it was a foregone conclusion that SVO would be given the task of producing the Daimler Corsica.

The team, led by SVO Manager Frank Marsden and Principle Engineer Gary Albrighton, took a standard example of the Jaguar (Daimler) X300 saloon and started to work their magic, first they stripped out the interior and then everything else until they had a bare shell standing in workshop.  The roof was then taken off; it says much for the structural strength of the X300 that very little was needed to keep the body rigid.  Then the entire car was shortened by 150 mm (6 inches); as the body was now not standard, doors and glass had to be specially made by SVO.

It was finished in the ‘Insignia’ colour of Peppermint Green  with unique interior trim, the seats embroidered with the Daimler logo in green,  and a power operated folding hood.  After being shown at various events to mark the Daimler Centenary, the Corsica was retired and was displayed for a time in the reception area at Browns Lane.  Later it was added to the Jaguar Daimler Heritage Trust (JDHT) collection of historic vehicles.

Initially, there were plans to make the Corsica fully-operational and the necessary mechanical and electrical equipment had been allocated.  This was evidenced by the fact that strengthening panels to fit around the transmission tunnel had been manufactured and stored and would be recovered when required.  However, plans changed and SVO were required to finish it as a non-working dummy.  Some wiring was installed, as were a few components for cosmetic purposes to make it look good; the four wheels revolved so that the Corsica could be moved about.  No suspension was fitted nor were there any brakes.  During its time at Browns Lane it was pushed around the JDHT building as required and just looked good oozing quality.  While it may not have been able to move under its own power, it did have a party trick – a fully-working convertible hood.  This was manufactured by SVO, but some elements, such as a bought-in motor, were used to make it operational.  All that was required to raise or lower the hood was connection to a 12-volt battery.

Plan To Make The Corsica a Fully Working Vehicle

At a meeting of the JDHT Trustees in 2005, the suggestion that the Corsica be made a working vehicle was tabled.  Some soul-searching went on and the go-ahead was given to the project which was to be carried out by Jaguar expert, David Marks, and funded by the Jaguar Enthusiasts’ Club (JEC) with Jaguar Classic Parts supplying some of the missing bits and pieces.  In March 2006 the Corsica was transported to David Marks’ facility in Nottingham. 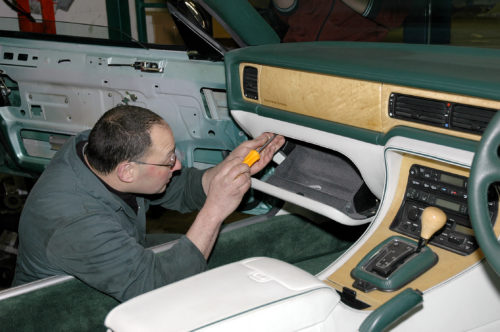 13 March 2006 – David Marks stripping down
the Corsica at his Nottingham workshop.

Work commenced on 13 March 2006, with the total dismantling of the car to see what was required.  Many of the items that had been earmarked for the Corsica remained in store with the SVO at Browns Lane and these were moved to Nottingham.  However, it was not simply a job of fitting the engine, gearbox, brakes, suspension, filling up the tank and turning the key.  There was far more work to the Corsica than that.

David Marks commented, “When we had got the car into bits we could look at what was required. There was no problem as far as the engine and gearbox was concerned, they were standard and would slot in nicely.  What was missing or had perished over the years were all the other items in the engine bay.  We had to source these from Jaguar suppliers and fit them.  We wanted to keep the car as near to its 1996 appearance as possible and were fortunate that parts are readily available.”

David had a surprise when he checked the front and rear axles. They were not X300, the rear was from an XK8 and the front from an XJ40.  So these had to be replaced; the entire suspension and braking system had to be installed where none had been fitted previously and the wheel hubs had to be changed.  “As the car is shorter than the original X300, we had to make or adapt brake pipes and wiring to fit.  The rear of the car is a different shape, the boot is smaller and a special fuel tank had been made and installed.  That shows you that it was intended to make this a working car.  However, we had to make a new filler hose and surround and also fit, very carefully, new fuel pipes.  They are shorter and follow a different contour from a standard X300.  We bought an X300 to rob parts to check fittings before we made or bought spares.  There were no major problems.” 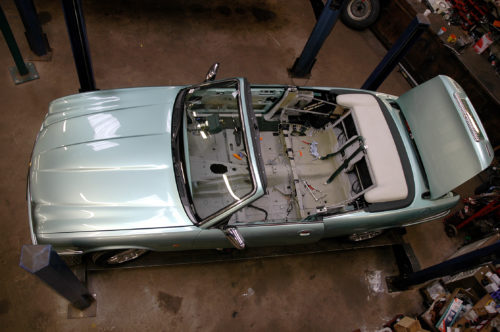 The empty shell of the Corsica with all the trim removed.

David also remembers the removal of the interior: “That was a one-off set of seats, carpets and woodwork.  I knew that the slightest mark, especially on the leather, would be a disaster.  There was just one of each made and there are no spares.  To make sure nothing happened I had them wrapped and took them home where they were stored well out of the way so that there could be no accidents.  It was a relief when we were able to install them in the Corsica.”

The stripped-out Corsica was on the Jaguar Classic Parts/JDHT stand at the NEC Classic Motor Show in October 2006.  It was surprisingly popular, considering it was just a shell with the insides missing.  During the following three months, David Marks and his team went to work and by the end of January had the engine, transmission, brakes, fuel system, suspension and electrics installed and working.  The recovered strengthening panels were brought from Browns Lane and fitted around the transmission tunnel as originally intended. 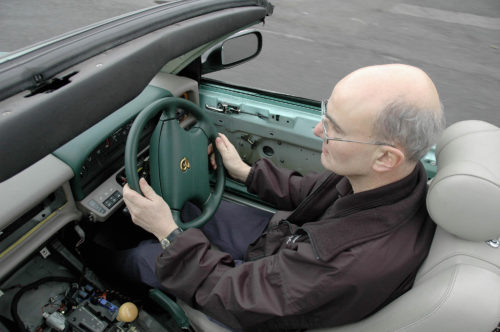 20 February 2007 – Gary Albrighton, principal engineer on the Corsica project, takes the wheel for his first drive.

Once the powertrain and the transmission tunnel strengthening panels were fitted, the various pipes, wires, hoses and the myriad of items that go to make up a working car were connected.

Fuel pipes and pumps were checked and the moment of seeing if it all worked arrived.

David takes up the story:  “It had been a long haul but we knew that we had done our best.  We poured some petrol in, the battery was connected and the ignition key was turned.  The fuel pumps were operational and the four-litre engine fired-up immediately.  It was a magical moment as we listened to the engine ticking over.  It was left running for a bit and then I slid the lever into D and released the handbrake.  The Corsica crept forwards for the first time under its own power.  Not wanting to do too much on its first run, I drove it around our estate, which is private, and was amazed by how responsive the Corsica is.  It feels livelier than the standard X300, but that may have been just the fact that it was a cold day and there was no roof above my head!” 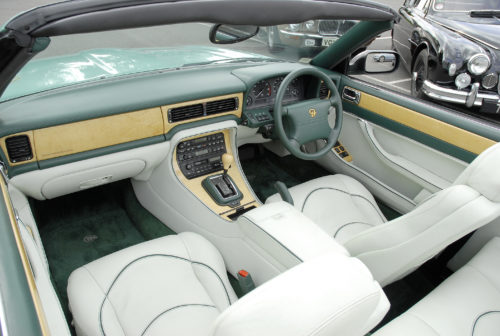 With the interior re-installed the Corsica is seen here on return to JDHT at Browns Lane.

Gary Albrighton was invited to view the Corsica on 20 February 2007, and although he had been in contact with David during the rebuild, Gary had not seen the Corsica for some time, so he was excited and anxious on the journey to Nottingham.  After a cup of tea, a general discussion about the work and the original concept, David Marks said: “Gary, would you like to drive it?”

“Would I just!” was the reply.

Soon Gary fired-up the engine. “That’s nice, I never thought I would ever drive this.”  After a short drive, Gary arrived back at the garage with a big grin on his face.  “That was magic!  It really felt good and there was no hint of any body rattle or scuttle shake.  The steering was positive and the whole car was very responsive.”

Work completed, the car was taken for, and passed, its first MOT.  It was registered (P300 COR) and taxed before being handed over to the JDHT by the Jaguar Enthusiasts Club.  It has appeared at several Daimler Lanchester Owners Club (DLOC), JEC and JDHT events since.

The Corsica was one of the eight cars selected for the 2020 exhibition at the British Motor Museum marking Sixty years since Jaguar bought the Daimler Company.  The Corsica remains a popular exhibit at the Jaguar Collections Centre at Gaydon.