The Lanchester Motor Company patented a form of disc brake as early as 1902.  The discs were thin and made of a soft metal like brass so while they dissipated heat they did not last very long and being cable operated weren’t very effective by modern standards and never went into volume production.

Dunlop had experimented with disc brakes on aircraft during World War Two and were well-placed to exploit the system for use by the automobile industry.  A Royal Air Force Engineering Officer, Harold Hodkinson, was posted to RAF Cottesmore at the end of the war to join the test flying team.  Here he met some of the Dunlop aviation department engineers who made regular visits to try out equipment on the RAF aircraft based at Cottesmore.  By the end of 1946, Hodkinson had left the RAF and joined the Dunlop Test Flight unit where he became involved with disc brake testing on aircraft. 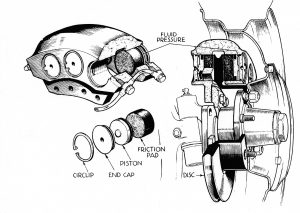 In 1946 the Dunlop Rim and Wheel Company took out Patent No: 688382 – a new design, which gave them a lead with disc brakes in the automotive industry.  It was Joe Wright, General Manager at Dunlop, who took up the disc challenge and tasked Henry (Harry) Butler to design a suitable disc brake for motor vehicles.  Butler had a working model which was ready for testing in a suitable car.  Meanwhile, Jaguar Cars had been at work designing both a new sports model the XK120 and a new saloon, the Mark VII, both of which were fitted with conventional drum brakes.  However, the drum brakes were not really up to the task and an alternative was required.  Jaguar had some success with the drum brake-equipped XK120 (Silverstone) and C-type (Le Mans – 1951) but a better braking system was clearly required for racing as well.

During the winter months of 1951 and 1952 disc brake development with Dunlop and Jaguar working together began in earnest.  The prototype right-hand-drive XK120 (HKV 455), which was driven by Prince Bira at Silverstone in August 1949, was allocated to the Dunlop test fleet and fitted with disc brakes.

(Sir) Stirling Moss assisted Jaguar with their tests and Harold Hodkinson told Andrew Whyte: “Moss was a real professional.  He was always prepared to help and encourage by coping with experimental equipment, and he would always make the most of it.  He always pushed development along and, in fact, he persuaded Jaguar to fit a C-type with our discs for Easter Goodwood in 1952.”   The race was the Goodwood Handicap Easter Meeting on 14 April and Stirling Moss drove C-type XKC 003, which had been fitted and tested with disc brakes, to fourth place.  He also recorded the fastest lap of the day and, more importantly, it was the first time Jaguar (or anyone) raced a car with disc brakes.

Earlier in 1952, the first C-type (XKC 001) had been fitted with Dunlop disc brakes for testing at the MIRA track near Nuneaton and at Perton near Wolverhampton.  This was a former Royal Air Force airfield and was more private than the MIRA facility.  In the driving seat was newly-appointed test driver Norman Dewis.  Working closely with Hodkinson, Dewis put XKC 001 through a series of rigorous tests which included a marked long straight (at Perton) to resemble the Mulsanne section, including the Arnage corner, at Le Mans. 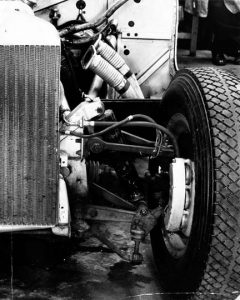 On 29 June 1952 Moss drove Tommy Wisdom’s XKC 005 to win at Reims, at an average speed of 98.18 mph (158.00 km/hr).  This was the first time an international motor race had been won by a car fitted with disc brakes.  When Dunlop examined the brake pads after the race they found that they had worn down considerably and they reported that pads made to the same specification would not last the 24-hours at Le Mans.  The brake pads could not be changed quickly during a pit stop so Dunlop had to develop pads thick enough to last the entire 24 hour race. 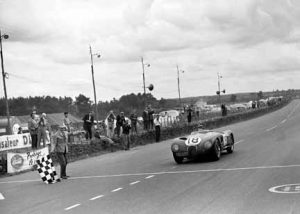 Duncan Hamilton crossing the winning line at Le Mans in 1953

Jaguar made the C-types lighter and fitted the improved disc brakes for the 1953 Le Mans race.  Tony Rolt and co-driver Duncan Hamilton won the race at an average speed of 105.85 mph (170.34 km/hr) with Stirling Moss and Peter Walker coming second.  It was the first time that the race had been won at an average speed of over 100 mph (160.93 km/hr).  It wouldn’t be quite true to say that Jaguar only won because of the disc brakes.  While they helped considerably, the expert drivers and the finely-tuned C-types contributed more to the victory than has sometimes been reported.  What the Jaguar-disc brake combination did, was to make other car manufacturers realise that without a disc braking system they would find it hard to compete effectively. 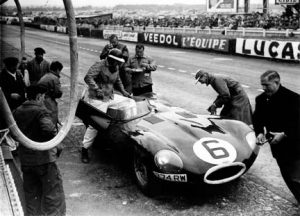 Following the successes at the French circuit, Jaguar wanted another Le Mans competitor and Malcolm Sayer delivered the spectacular D-type; a car that was unlike anything else on the scene.  Powered by the XK engine and fitted with even better disc brakes, the model went on to win Le Mans in 1955, 1956 and 1957.  Jaguar retired from racing to concentrate on manufacturing cars at Browns Lane.

By 1958 Jaguar offered disc brakes as options on the 2.4 and 3.4-litre saloons (now referred to as Mark I Saloons). 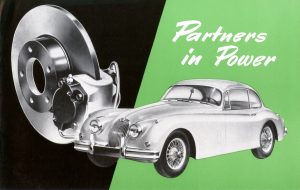 The XK150, introduced in 1957, had disc brakes all round as standard.  It was however, the 1958 Mark IX that was the first Jaguar saloon to be fitted with four-wheel disc brakes as standard.

When the Mark II series of saloons were introduced a year later they too were equipped by the factory with four-wheel Dunlop disc brakes. 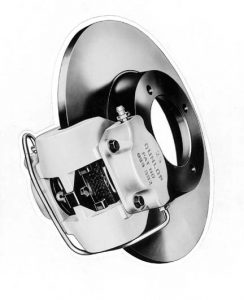 Dunlop production disc brakes changed considerably from the 1953 Le Mans winning brakes with a single piston per side and easily removable brake pads to simplify maintenance.

The disc brakes used on the 1953 Le Mans winning C-type had six piston (six pot) callipers (three pistons per side) each with separate brake pads on the front, and four pistons on the rear.  It is only now, more than 60 years later that ‘six pot’ callipers are becoming standard on high performance road cars.