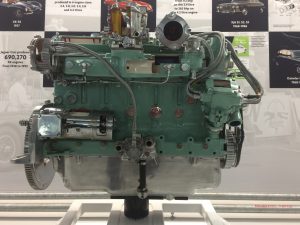 Following the success of the XK engine Jaguar considered other applications for the unit and one of them was to adapt the 4.2-litre XK for military use.  Having passed stringent trials by the Army the XK was chosen for fitting to the Alvis Scorpion range of light tanks and tracked armoured vehicles.

The specification was changed considerably from the car engine.  The standard SU carburettors were replaced with a single, large, down-draft Solex carburetter, fitted on top of the inlet manifold.  The distributor was screened and waterproofed. The HT leads were also waterproofed and covered with braided metal sleeving and led to military grade standard spark plugs.  A revised breather system with flame traps, to protect from an engine fire, was specified by the military.

Unlike the high-performance car engine, the military XK unit was given a lower compression ratio of 7.75:1 so it could run on low grade fuel.  The tappets were larger than those used in normal production engines so that they could accommodate a collapsing spring and washer mechanism to ensure positive rotation of the valves, with the aim of making valve seat wear less likely.  A military-grade fuel pump, on top of the engine, replaced the original unit.

The Scorpion, Scimitar, Samaritan and Samson army vehicles with Jaguar XK engines have seen operational duty in the Falklands, Croatia, Bosnia and Iraq in recent years.

A few are still in service but have now been re-engined with Cummins diesel units.

Surplus military specification XK engines have been converted back to original status for use by some XJ racing teams.