Wolfgang Schuhbauer, the Director of the Jaguar Test Centre at the Nürburqrinq has documented the story behind the preparation and racing of a 2003 Diesel powered S-type saloon. 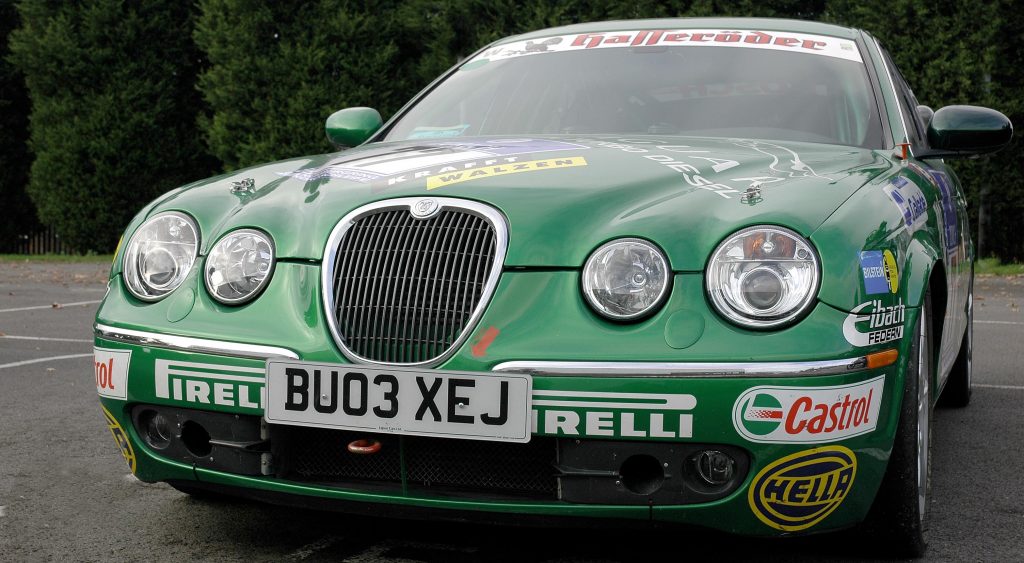 The old famous Nürburgring Nordschleife has become a key element in developing Jaguars in the last 10 years.  As a result of this Jaguar has built a new Test Centre directly next to the Nürburgring in 2003.  Testing and developing cars around the Nordschleife and German autobahns means influencing and refining all key vehicle attributes and systems.

After spending a long day at the Nordschleife and sitting together and having a drink we thought we could do a special “engineering” exercise.  We thought if we spend so much time on the Nordschleife we should show our customers that a Jaguar can participate in the most challenging motorsport event in the world with only doing a few safety related modifications – the 24 hour Race at the Nürburgring.  We thought that we could prepare a car with some help from our suppliers (Hella, Recaro, Pirelli, Brembo, Bilstein, Eibach).

The car was mainly prepared at the Nürburgring Test Centre with some help from good friends.  Only 8 weeks before the race we started with the preparation of the car.

It was always the intention to leave the car as close to production as possible and just changing the necessary things which are needed for homologation for the race.  We could have changed a lot more but wanted to show our customers a “production car”.

The powertrain was a standard S-TYPE Diesel engine with manual 6-speed gearbox and the ABS was standard calibration as well.

The car has done the first roll out just a week before the 24-hour race in Zolder (Belgium). We didn’t have a chance for driving the race car on the Nordschleife before the official practice.

I’ve put a team together for the 24-hour race from people which I’ve known from my motorsport experience.  As we didn’t have a lot of money most of the guys helped us without or only little money.  Dieter Häckl from Häckl motorsport has played the role of a technical leader and the team did an outstanding job.

It was clear from the beginning that we needed very experienced drivers who could drive a car fast and safe but without killing it (not necessarily “big” names that don’t take care of the car).  We wanted to demonstrate the strength of the car, and because we hadn’t driven the car before on the Nordcshleife we needed all the drivers experience to prepare it.

At last we decided on:

We can’t talk about the race without mentioning the weather.  It was horrible.  Raining, raining and for a change some more rain.  Because of our good connections with a military air base we had known this before and we decided to go in the race with a “wet” chassis layout which worked excellently.  Anja was driving in her ladies team at the beginning.

For the first 12 hours Michael and I got in a 2 hours rhythm.  I was driving at the start which is always critical because of the heavy traffic (230 cars).  And then it was 2 hours driving and having a 2 hours break.  During the break I went to the Jaguar hospitality to give our customers at the track some first-hand experience.  Michael was busy commentating during his breaks.  Under these difficult conditions our car was performing very well.  Technically the car was doing very well in the rain.  While many other teams had technical problems or accidents we had a very unspectacular race (pit stop every 2 hours, fuel, tyre and driver change and going ahead).  Lap by lap we improved our result.

After 16 hours we were 4th in the diesel class and 52nd overall.  We had just been 20 sec behind the 3rd.place.  When we did the driver change in the morning I told Anja (it was her stint) that we are not far away from 3rd place.  During her stint I informed her on the radio how close we were.  Probably this was a bit too much!!  Anja tried to overtake another car when turning in at “hohe acht” unfortunately the other guy didn’t watch his mirror and it came to an accident.

The Jag had a heavy impact in the barriers and the right hand side of the car was damaged (the dents at the car are still the original dents from the race).  As a result of this the front left knuckle was broken and it was impossible to drive the car back to the pits.  The car was standing on the right hand side next to the track at “hohe acht”.  Normally that is a definite out because there is no access to this specific place next to the track, but Willi our Testcenter Workshop Supervisor knows a special way to this place.  Willi took a Range Rover and after 30 minutes driving in the forest and another 15 minutes walk the team reached the race car and changed the knuckle.  The race continued.  However, as a result of the accident the car’s performance degraded and we couldn’t go at the same pace as at the beginning.

After I did my last stint the plan was that Anja should do the last 2 hours.  But as a result of the accident the power steering collapsed on Anja’s first lap and she came back to the pits because she couldn’t steer the car.  At this point, normally, Michael should have gone back in the car because I had just come out, but Michael was at the control tower commentating on the race.  I went back behind the steering wheel with only a few minutes break after my last 2-hour stint and finished the race.

Overall it was great, it was fantastic and we finished 8th.

Finally, the ultimate real-world performance test for every Jaguar comes at the famed Nordschleife layout of the Nürburgring in central Germany.  From our highly-advanced facility, cars are sent out on the ‘Enthusiastic Driver Robustness Test’ – a gruelling 8,000 kilometre, 390-lap run around 73 challenging curves that rise and fall 300m through Germany’s Eifel forests.

“The Nürburgring offers a real breadth of opportunities and a consistent benchmark, lap after lap,” says Phil Talboys, Manager of European Test Operations. “Our ultimate durability test is at the very top end of a car’s performance, and goes well beyond what most drivers will do, but that’s how we ensure robustness in the final product.”

“It really does benefit the average car driver – from a reliability and robustness point of view, as well as handling.  If a car can survive the Nürburgring, it’s going to be capable and durable in the real-world.”