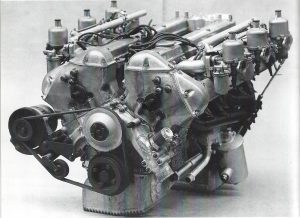 Although Jaguar had experimented with a V12 design during the early 1950s, it was not until 1971 that the engine became a production reality.  The logical approach was to take two engines and mount them in a 60° ‘V’ on a common crankcase and share a single crankshaft.  Though the bore capacity would remain the same, the newly-designed crankshaft would enable the designers to choose a suitable stroke.  Claude Baily started work on such an engine, taking an original XK 3.4-litre bore capacity of 83 mm and selecting a stroke of 75 mm to yield a capacity of 4,870 cc, to keep it small enough to fit under the bonnet of the existing Mark VII saloon.  At the time Jaguar did not have the resources to develop the engine further and it was side-lined.

Walter Hassan returned to Jaguar in 1963 when the Company bought Coventry Climax and, together with Baily, was tasked with developing the V12 that existed on paper.  Harry Mundy also joined the small team and work proceeded to build a race engine – particularly for Le Mans – and a second version for road going Jaguar sports and saloon cars.

Hassan was unhappy with the four-cam, five-litre V12 engine that had been designed in his absence.  It was too heavy, large and complex and would not have fitted the proposed Le Mans car.  Hassan and Mundy began work on a new single-cam design, but the four-cam unit was built and ready to be tested, two versions were proposed – one with four SU carburettors for road cars and a second with Lucas mechanical fuel injection for racing. 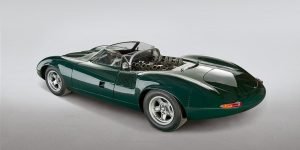 Ready for testing in 1964 the unit was fitted to a Mark X saloon. Norman Dewis remembers testing the car at MIRA and being surprised at reaching 136 mph without effort and still accelerating.  “Given the right gearing and a flat piece of road I think it would have exceeded 150 mph.”

Hassan and Mundy were concerned that the chain drive to the four camshafts was complex and noisy; and were worried about long-term reliability.  Such a unit would be acceptable in a race car but not in a conventional saloon, especially as the XJ6, then in development, was intended to be powered by the V12.  Another area of concern was the cylinder head layout; several alternatives were investigated by Hassan and Mundy before settling on a ‘Heron’ head with the valves sitting upright in line, in a completely flat head with the combustion chamber being formed in the piston crown.  The V12 was intended to fit into the XJ6 engine bay, and this meant that the single cam head would result in a more compact unit when compared with the four-cam unit. 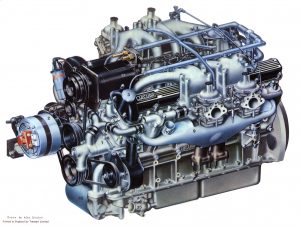 When a prototype of the new engine had been built it was fitted to one of the department’s Mark Xs and tested alongside the four-cam-equipped Mark X.  It proved much smoother and more efficient and was obviously the engine that should be developed for production cars.  Mundy, Hassan and Baily now worked together to refine the design.  The racing engine was redesigned and the cylinder heads were replaced with a more conventional two-valve design, employing a Single Overhead Camshaft (SOHC) acting directly on vertically inclined valves through bucket tappets.  The revised head design had restrictive and long inlet ports which sacrificed top-end power but which, along with an increase in displacement to 5.3-litres, greatly improved performance at low-mid engine speeds.  The chain-driven SOHC heads and the soft valve springs, fitted to reduce valve-train noise, resulted in the red-line being lowered to 6,500 rpm from the 8,000 rpm of the original four-cam design.

There is an interesting 19 minute video on YouTube of Raymond Baxter interviewing Walter Hassan and Harry Mundy about the V12 engine.

Jaguar wanted to use fuel injection for the V12 but there was no working British system available at the time and with production of the V12 about to commence, Jaguar had no alternative but to fit four Stromberg carburettors.  On 29 March 1971 the Jaguar 5.3-litre V12 engine was announced.  Though it was originally intended to power the Jaguar saloon it was first offered in the E-Type Series 3.

Much was made of the world’s first quantity-production V12 engine; other manufacturers had offered V12 power but only in small scale manufacturing by hand.  Further, Jaguar pioneered the use of light aluminium alloys for the cylinder block (instead of cast iron), cylinder heads and pistons, all of which reduced the overall weight of the engine to only 680 lbs (308 kgs) – less gearbox.

Less than a year after the E-type Series 3 had been launched, Jaguar introduced the XJ12 saloon to critical acclaim for its refinement and performance.  Carburettors gave way to a Bosch fuel-injection system in 1975 and later a Bosch-Bendix-Lucas variant. 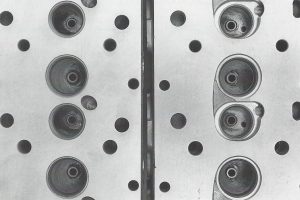 The XJS was introduced in 1975 and in 1981, to improve fuel economy, Jaguar announced a revised engine with a new design cylinder head from Swiss engineer Michael May. 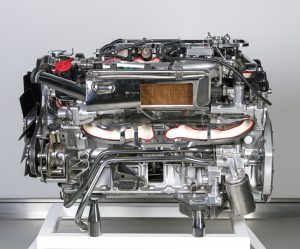 Known as the ‘May Fireball’, the changes were introduced in the XJS HE range, greatly improving its fuel efficiency.

There was scope to increase the power of the V12 further and the engineers, led by Harry Mundy, investigated changes which involved modifying the tooling to make the block taller, taking the stroke to 84 mm but costs were too high and it was not proceeded with.

In the late 1980s Tom Walkinshaw Racing produced 7.0 and 7.4 litre versions of the engine which were used to power the XJR9 and XJR12 respectively.

The last production V12 engine was installed in the final 6.0 litre XJ6 built in 1997 – P60 SOV now on display in the Collections Centre at Gaydon.