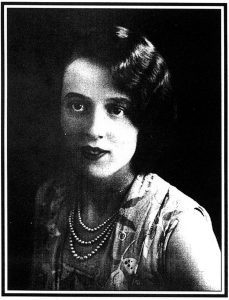 Alice Fenton started working for the Swallow Sidecar Company in Blackpool, in 1925, as an office junior and then as William Lyons’ secretary, before helping him with sales and eventually being appointed Home Sales Director, the first female director of Jaguar Cars.

She had been working in William Lyons Senior’s music shop and Mrs Lyons suggested she make the move.  Alice was a lively, vivacious young lady who used to play the piano in the shop to attract customers. Alice and her sister Nancy lived with their parents in Hawes Side Lane not far from the Bloomfield Road works.

She had taken the ‘commercial’ course at school and had shorthand and typing skills and became young Lyons’ secretary at Bloomfield Road staying with the company when it moved to larger premises in Cocker Street.   She worked whatever hours were necessary, often into the evening to complete the days work.  The days were so busy that the only time quiet enough to take dictation was after 5.30 pm when everyone else had gone home.  Alice and Connie Dickson often worked until 7 or 8 in the evening, sometimes going dancing in the Winter Gardens afterwards as that was the only entertainment available after work. 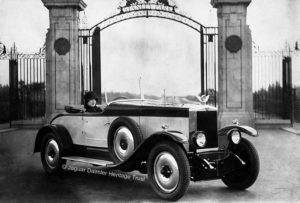 1928 Alice Fenton
in Morris Cowley Swallow
at the gates of Stanley Park, Blackpool

The company started making Swallow bodied cars in 1928 and it was the order from Henlys for 500 that precipitated the move to Coventry.  Alice was one of the 32 out of the 50 employees who made the move to Coventry in November 1928, all of whom did so without any removal expenses.  Connie Dickson who had worked with Alice in the office in Cocker Street didn’t initially come down to Coventry but followed a fortnight later at Alice’s insistence and they shared digs together in Holmsdale Road.  After an incident one evening when passing the Holbrook Lane fish and chip shop, where they were pushed into the road, either Lyons or Walmsley usually walked them home at the end of the day’s work.

They moved to a bigger, rented house some time later and were joined by Alice’s sister Nancy.

Alice’s duties expanded beyond secretarial and as the company didn’t employ any dedicated sales staff, the sales team became William Lyons and Alice.  In October 1929 Swallow Coachwork had a stand at the motor show at Olympia in London and both Alice and Connie went with the company.  Alice attended all subsequent UK Motor Shows.

In 1932 a former Triumph employee, Alec Blythe, joined the company to assist Alice with her sales role.  She also received some help from Nancy before she moved to become secretary to the new service manager Digby Paul.  The 1932 London Motor Show was extremely successful with over 1,000 orders being placed for the new SSI.  The business continued to expand and by 1933 the company had 100 nominated agents, 18 of them classed as distributors and it was Alice who sorted out all the agreements and organised deliveries.

William Lyons didn’t like customers to think his cars weren’t selling well and his dealers had instructions not to have more than one of each model on show.  Alice used to relate a story  about when she told a customer his choice of SS car was available at once, he told her off, saying she should have promised to try and help, then phone him later saying she’d been successful in finding a car of the right specification for him. 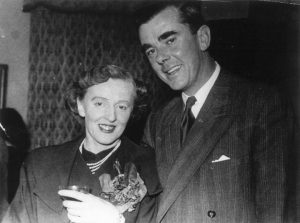 The outbreak of war in 1939 meant the company had to cease its 200 cars per week production and concentrate on war work, repairing Whitley bombers and building parts for Stirling, Mosquito, Spitfire and Lancaster aircraft.

When Alice had completed 25 years with the company the distributors and dealers were anxious to know what kind of gift they could present to her in acknowledgement of her unfailing cooperation and camaraderie with them.  Her one great wish was to own a grand piano and this she confided to Mr Bertie Henly though at the time she had not a house large enough to accommodate one.  So the gift was a cheque, and with the acquisition of a larger house, she was looking forward to being able to fulfil her dream. 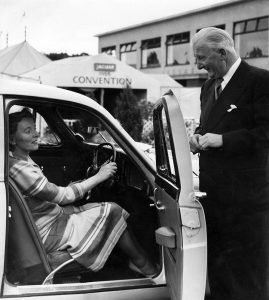 During the bombing raids of the Second World War the factory had to close earlier to enable people to drive out of the city or to go to bomb shelters and Alice was free from constant overtime to enjoy more leisure.  A group of them would go off to a dance held regularly at the RAF camp out in the country.  She once commented that she ‘had been to every dance hall in the Midlands’.

The end of the war saw further growth with the launch of the Mark V saloon and the XK120 sports car at the 1948 Motor Show followed by the XK powered Mark VII saloon in 1950.

In 1950 Ben Mason joined the company as Export Sales Manager with Alice still looking after the home market.

In March 1956 Lyons created four new directors – Alice was made Home Sales Director the first female Director in the Company’s history – a role she retained until her untimely death in 1960.

During 1959 she had been having problems with nerves on one side of her face causing some facial paralysis and started receiving treatment for what was thought to be Bell’s palsy.  She thought the cause may have been either the draft from the roof of her car or as a result of a minor car accident, that autumn, where she bumped her head.

Having attended all the British Motor Shows since 1929, Sir William decided Alice should attend the 1960 New Year Motor Show, at the end of March, for the US launch of the new Mark II compact saloon.  Rooms had been booked for her at the Waldorf Astoria and she was looking forward to exploring New York and meeting some of the American dealers in person for the first time. 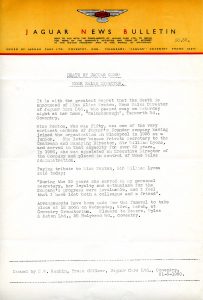 Alice didn’t make it to New York and died on 18 March 1960 of a cerebral haemorrhage aged only 50.  On March 21 Sir William wrote to all distributors and dealers “It is with the greatest regret that the death is announced of Miss Alice Fenton, Home Sales Director of Jaguar Cars Ltd, who passed away on Saturday night at her home, “Gainsborough, Tamworth Road, Coventry.”

“During the 33 years she served as my personal secretary, her loyalty and enthusiasm for the Company’s progress were invaluable, and I feel that I have lost both a colleague and a friend”.

Sir William’s daughter Pat described Alice as “an absolute tower of strength…who was so efficient, and remembers thinking when young that if anything in the world was wrong all one had to do was get Alice Fenton and it would be put right overnight”.

During her time with the company, Alice was the only female Jaguar executive and the highest-placed woman in the British motor industry. 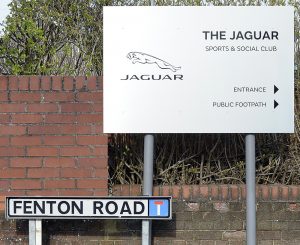 She achieved all this through hard work, dedication and her own sheer ability and was the only woman of that time to break through what we now call the ‘glass ceiling’.

Her death was reported in both the Birmingham Daily Post and the Coventry Evening Telegraph.

The road off Brown’s Lane that runs down to the Jaguar Social Club, is called Fenton Road in her honour.

© Text and Images – Jaguar Daimler Heritage Trust except (where stated)