From Part-time Salesman to Deputy Chairman

Arthur Whittaker was one of the first employees of the Swallow Sidecar Company in Blackpool, starting as a part-time salesman, rising to General Manager, Board Director and ultimately Deputy Chairman of Jaguar Group. 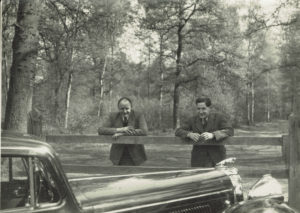 Arthur was born on May 29th 1904 into a family of three older sisters.  His mother came from Horsham in Sussex, and his father was a Post Office clerk from Chorley in Lancashire – they allegedly met at the top of the Eiffel Tower shortly after it was completed!  His mother was an adventurous character who told her parents she was going to London with a girlfriend when she made the daring trip to Paris as a teenager.  Some decades later, presumably after Arthur’s father died in 1936, she illegally entered the USA from Canada certainly with two, and possibly all three, of Arthur’s sisters.  Within sight of Niagara Falls they simply walked across the river bridge, wearing all the clothing they possessed in multiple layers.

Arthur’s family home was a terraced house on Blackpool Promenade by the North Pier, the front door steps being approached from Talbot Road.  He was educated at Blackpool Grammar School and, after leaving school, started work as an apprentice at the local Metropole Garage.  The Metropole was owned by Brown and Mallalieu, a car sales business whose junior salesman was one William Lyons.  Lyons left Brown and Mallalieu to form the Swallow Sidecar Company with William Walmsley early in 1922 and Arthur joined in 1923, taking on the seasonal role of part time salesman and becoming one of Swallow’s original employees.  He travelled the country on his Granville Bradshaw engined Matador motorcycle selling sidecars to the trade, covering huge mileages, often in atrocious weather conditions – much to his mother’s concern.

During quieter times of the year, when sales activity was slow, Arthur refurbished the chassis and engine of a burnt-out Austro Daimler which William Walmsley acquired from his brother-in-law in Stockport and subsequently used to build the very first (unofficial) “Swallow” bodied car.  Harry Gill helped to build the new body.

Swallow first exhibited their sidecars at the Olympia Motorcycle Show in 1923 when Arthur undertook the role of duty salesman– all three display sidecars were sold, thereby saving the time and expense of repatriating them to Blackpool by rail.

By all accounts Arthur was not best suited to sales activities and in 1927, as the company expanded into building car bodies, he migrated to the commercial and service side of the business, becoming Lyons’ Chief Assistant.  With little space for offices, Arthur and his secretary Connie Dickson were confined to a corner of the stores with a skylight as the only window!

His duties quickly became so extensive that, even with his secretary’s help, he was struggling to cope – Harry Teather’s appointment as Stores Manager in 1928 helped to relieve some of the pressure.  In the same year Arthur played a senior role in moving the business from Blackpool to Coventry, being one of the first people to make the move.  He often provided a “taxi service” for employees over the next couple of years on his frequent trips between Blackpool and the Midlands.  His passengers reputedly paid a “fare” of ten shillings each and needed to tolerate his chain-smoking habit!  The “taxi service” ceased in 1930, when Arthur returned from Blackpool with his new bride Mary to set up home in Coventry.  Arthur had met Mary at Bispham Tennis Club, just a couple of miles north of Blackpool.  They married in Bispham church and a couple of years later had their only son Tony, who had been born in Coventry, christened there.

By 1935, in characteristic quiet and understated manner, Whittaker had progressed from his underwhelming sidecar sales activities to become a highly effective General Manager, his extensive portfolio of responsibilities being reduced slightly when Digby Paul joined as Service Manager in 1934.

When SS Cars Ltd was floated in 1934, William Lyons became Chairman and Managing Director and Arthur was appointed a main board director.   In 1935  the first SS Jaguar was dramatically launched in London at the Mayfair Hotel.  Guests were invited to estimate the selling price of the new car, the average guess being over £600 whilst the actual price was £385 – the latter had been achieved largely due to Arthur’s legendary purchasing skills.  Arthur became known throughout the industry for his business skills and fairness, Edward Huckvale’s son once commenting how he had been struck by the number of people looking for Arthur at the Geneva Motor Show “simply to shake his hand”.  Lyons knew that he would always strike a hard bargain, and his shrewd negotiations with suppliers were significant in enabling Jaguars to continue to be so competitively priced.

Tony Whittaker recalls that by the mid-thirties; “SS Cars was doing quite well notwithstanding the Depression, and Father was earning £6 per week.  On that my parents ran a small car, one of the firm’s Austin Swallows, and had a live-in maid”.  During the first eight years of their marriage Arthur and Mary lived in four different rented properties in Coventry before buying, in Tony’s words, “a pretty posh 4 bedroomed detached house.  It was brand new and cost some £2,000”.

The Whittaker family lived in that house for 14 years, and all through the war.  The war years were a busy time for Arthur Whittaker as a director of a company engaged in war-time production and repairing aircraft during the day and fire watching at night.  At the end of the war Arthur Whittaker released the official account of Jaguar’s wartime activities. 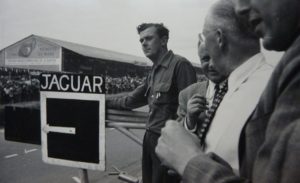 1953 Arthur, cigarette in hand, with William Lyons in the Le Mans pits.
Lofty England holds the pit board

Arthur travelled extensively as a senior Jaguar executive – he was at Le Mans, with Lofty England and William Lyons, to witness the marque’s C-type success in June 1953.  Later that same year he witnessed Norman Dewis drive an XK120 to a record 172.412 miles per hour on the Jabbeke straight in Belgium. 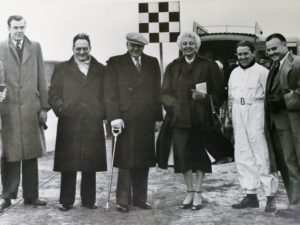 He was a frequent visitor to the Geneva motor show and spent a considerable amount of time in the USA helping to develop the distributor network – Jo Eerdmans, President of Jaguar Cars North America, thought highly of Arthur, considering him to be especially decent and thorough. 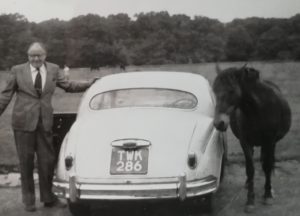 Whittaker’s quietly understated disposition was evident both at home and at work.

He arrived home late for dinner on February 12th 1957 and, during the course of the meal, put down his knife and fork before announcing he would need to return to the works again later.  When his wife asked why that was necessary, he calmly told her “the factory is on fire”. 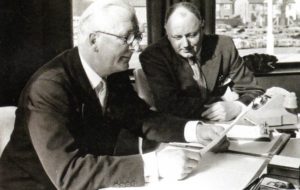 1957 Sir William and Arthur Whittaker.
The fire damaged factory can be seen through the windows

On another occasion Arthur came as close to losing his temper as anybody can remember. He and his wife Mary had gone away for the weekend leaving son Tony to keep an eye on the family home.  When Tony noticed his mother’s car missing from their garage, he called the police.  Officers duly arrived and were standing on the driveway discussing matters with Tony when Arthur’s gardener drove up in Mary’s new Jaguar, with suitably impressed girlfriend in the passenger seat.

Tony sacked him there and then.  When he telephoned his father to tell him what had happened Tony received a less than sympathetic response – “What the hell did you do that for?  I’ve got a bloody factory full of cars and good gardeners are like gold dust!”

Arthur was appointed Deputy Chairman of the Jaguar Group at the 1961 AGM, at which time he recruited John McMillan from Wilmot Breedon to be his personal assistant.

When William Walmsley died in June 1961, Arthur and Edward Huckvale attended the funeral on behalf of Jaguars Cars. 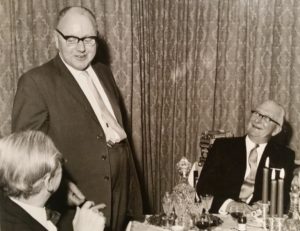 Arthur retired due to ill health in November 1968, McMillan assuming his responsibility for Group Supplies and Lofty England succeeding him as Deputy Chairman.

“Ticker” was an unsung hero, rising from part time sales rep to Deputy Group Chairman and giving 46 years of his life to “the works”.

Whilst Jaguar were fortunate to have had many outstanding and talented individuals in various departments, Arthur, in addition to his numerous direct responsibilities, had been the glue holding them all together.

“There is no doubt the company is badly missing Mr Whittaker, who was responsible more than anyone in the organisation for welding the various departments into a single unit”. 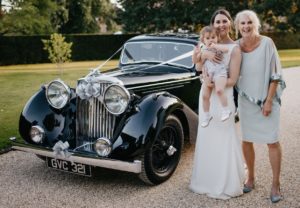 “His contribution to the success of Jaguar was immeasurable, and I personally greatly valued his loyalty and sound judgement in everything affecting the company’s policies”

In 2017 Arthur’s 1948 Mark IV saloon, GVC 321, which had been sold in 1950, came up for auction having been completely restored over a period of more than 20 years.  This came to the attention of Arthur’s granddaughters who bought the car.   In 2019 it was used to take his great-granddaughter Emily to church for her wedding.

GVC 321 will be on display in the Collections Centre at Gaydon from January 2020 for approximately six months.