Charles Kingston Welch was born in 1861 in Tottenham, London, the eldest of ten children and following early work as a bicycle maker, went on to make a number of inventions which were crucial to the manufacture and development of the pneumatic tyre.  It is said that he was just five feet tall.

By the age of 20 (1881) while still living with his parents in Tottenham he was working as a bicycle maker.  He married Annie Gertrude Borley in Edmonton, North London in 1890.  By 1891 (age 30) they had moved to Warwick Road in Coventry, which at that time was the home of the British bicycle industry.  He described himself as a Consulting Mechanical Engineer, clearly doing well as they employed three servants. 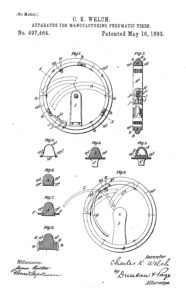 In 1892 he applied for the first of a series of British patents involved with making pneumatic tyres for bicycles – the first one, an improvement on a machine for making tyres. 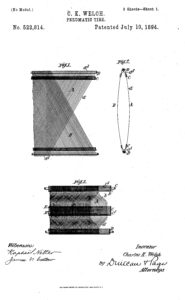 In 1893 he invented the  ‘beaded rim’ which stopped deflating tyres from coming off the rim.  He used two inextensible wires ‘solutioned’ into the edges of the outer cover.  By the process of inflating the inner cover these wires embedded themselves in the rim and prevented the covering from blowing off.

By now the Welch family had moved to The Hollies, Eaton Road, Coventry, which is the address listed in most of the Patent Applications. 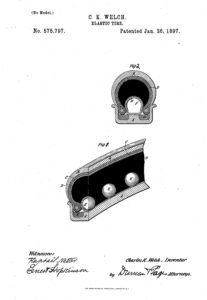 The United States Patent Office granted Welch a whole series of patents from 1893 to 1897. 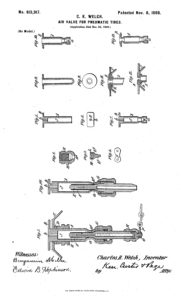 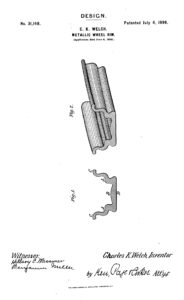 The 1911 Census showed the Welch family still living in Coventry with his wife but living on private means, so presumably now retired.

DU 1 is older than the car, as it is the very first mark to have been issued in Coventry under the Motor Car Act of 1903, which decreed that from 1 January 1904, cars must be fitted with number plates.  It is likely that DU 1 was purchased to represent his involvement with Dunlop. 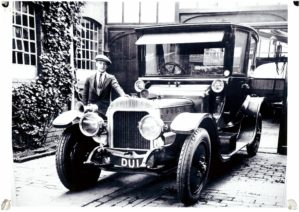 His widow, Annie, kept the car until 1946, when she donated it to the Daimler company, at the time that Daimler, and the British motor industry, celebrated its Golden Jubilee.

The car has been with Daimler, then Jaguar Cars, following the 1960 takeover by Jaguar of Daimler, ever since.  Ownership of DU 1 was transferred to the  Jaguar Daimler Heritage Trust when it was formed in 1983.