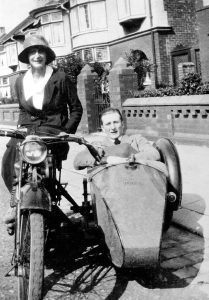 Greta on motorbike and William in sidecar

William Lyons was not quite twenty when he met Greta Brown at a school friend’s party in Blackpool in 1921.  She later recalled: “It was one of those silly dances where you exchanged labels and danced with whoever had your counterpart.  Billy could not dance at all, it was terrible.”  Sir William’s younger daughter, Mary, echoed this sentiment years later when she said that her father “could dance but was not an expert.”

Lyons was taken by Miss Brown and in due time he asked her to go out with him on his motorcycle.  She remembered that date, “The first time he asked me to go out with him was pillion riding on the back of his motorbike and I was asked to meet him at a certain place outside Blackpool.  I remember my parents said, ‘Why doesn’t he call for you here?’  He explained the reason to me afterwards; the bike would only start at the top of a hill going down, so that is why we had to meet there.” 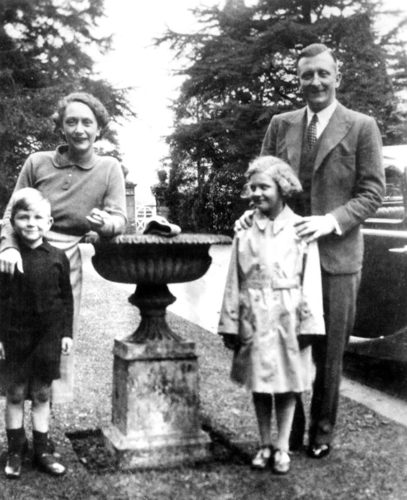 The unusual method of meeting William at the top of a hill, did not put her off and she went on several other outings with Lyons on the back of his motorcycle.  He talked to her about his new venture into sidecar manufacturing with William Walmsley as his business partner.  By 1923 the Swallow Sidecar business was doing well enough for him to consider marriage and he proposed to Greta.  They were married on 15 September 1924, at St Stephen-on-the-Cliffs church, Blackpool, with Lyons’s old school friend, Arnold Breakell, as best man.  At the time the church was still under construction, so the wedding was conducted in the consecrated part of the church hall that was used for worship.  They spent their honeymoon on a motor tour in Scotland with William Lyons driving his Talbot 10/23 tourer.  On their return they initially set up home in a small flat before moving shortly afterwards to a bungalow in Bispham Road, Blackpool.

Mrs Lyons took an interest in her husband’s work but she was not actively involved in the day to day running of the Company in any way but was a tremendous support to Lyons throughout their marriage.  Greta accompanied Lyons on his annual trip to the Isle of Man to watch the TT races and other events where SS100s (driven by Tommy Wisdom among others) were being rallied. 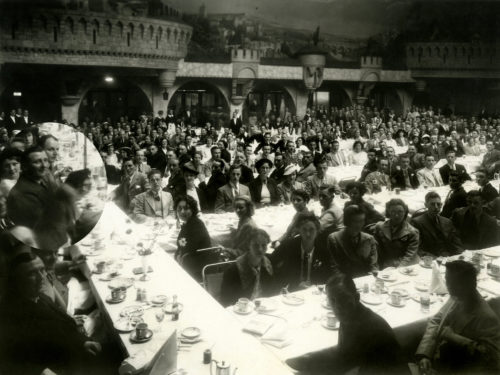 Greta drove the various cars manufactured by SS and Jaguar and on 18 January 1937 she took possession of a new 2½-litre saloon (chassis number 12462).  Registered CDU 700, Greta drove the new car on some sporting events and from all accounts greatly enjoyed the experience.  She used the saloon on a daily basis until 1946 when it was replaced with a newer example. However, she did not part with the SS Jaguar and it was stored in the stable block at Wappenbury Hall, the house Lyons had bought for the family in 1937.

World War II brought changes to the family arrangements with domestic staff disappearing and Greta having to manage Wappenbury Hall on her own, while Lyons spent even more time than normal at work.  After the Coventry Blitz the Lyons’ welcomed Coventry refugees into their home with families staying in the attic, stables and the coach-house.  Greta also took on voluntary work in the canteen on Anstey aerodrome.

Patricia (Pat) married Leeds Jaguar distributor and rally driver Ian Appleyard, and was his co-driver in many international rallies from 1951 to ’56, mostly in a 1950 XK120 registered NUB 120, including the Alpine Rally which they won three times. They divorced a few years later and Pat remarried in 1962 and had two children by her second husband, Norbert Quinn: Michael Quinn and Jane Quinn.

After leaving school John Michael served a three year apprenticeship at Leyland Motors and then completed his two years National Service in REME, mainly in Germany, after which he spent six months in Paris working for the Jaguar distributor Charlie Delacroix.  In March 1955 he joined Jaguar as an apprentice and his father was grooming him to take over what he essentially treated as a family business, moving him through different departments.  Lyons sent a memo to all senior staff saying his son would ‘ultimately take a position of responsibility.  His first assignment will be to undertake an investigation into economies which can be achieved in the design, construction and manufacture of the Mark VII.  I shall be glad if you will give him every possible assistance and co-operation.’   While struggling to find meaningful savings John also took a keen interest in the competition cars and saw the D-types being worked on for the 1955 Le Mans 24 hour race.  In June 1955 he was driving a Jaguar Mark VII support car on the way down to Le Mans and shortly after stopping for petrol about 30 miles (48 km) south of Cherbourg, his car collided with an American service vehicle and he was killed instantly.

Mary married Guy Rimell (son of successful racehorse trainer Fred Rimell) and had three children: Katie, Tom and Mark.  In later years Greta owned a number of racehorses trained by Mary and Fred Rimell.  One of these, Jungle Beach, won 12 races and came second in the Mackeson Gold Cup at Cheltenham.  Lyons left horses to Greta and likened horse racing to watching cars going round in second gear.

Lyons was a very private man and he never commented to outsiders about his personal life, but from what has been said by his children and grandchildren, it is obvious that they were a close and devoted couple even more so after John’s death in 1955.

Greta accompanied Lyons on some of his international trips, notably those to the USA but as she hated flying they always crossed the Atlantic by sea, on the Queen Mary in 1958 and the Queen Elizabeth in 1962.  1962 also saw instances where, for a change, Greta did not support a couple of her husband’s ideas.  He looked into making some personal investments and buying a couple of country estates, one in Shropshire and one in Donegal, Northern Ireland.  The family believe that Greta vetoed these plans as she did not want the responsibilities and restrictions of running a large country estate.  The couple enjoyed golfing holidays together, often at Gleneagles in Scotland and it is reported that Greta was a more accomplished golfer than Lyons.  In his 60s he suffered from severe headaches being treated unsuccessfully for migraines and by his mid 60s Greta was urging him to retire which he didn’t do until he was 70. 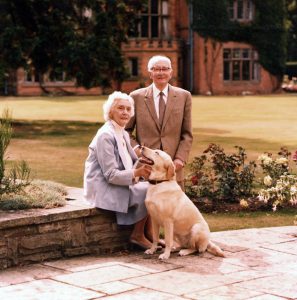 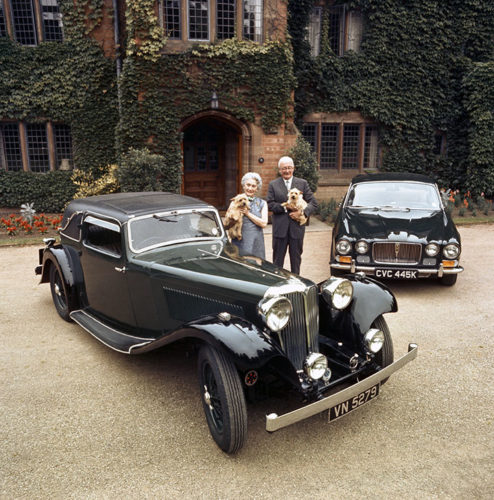 The home Greta made at Wappenbury Hall for the family was a place in which Lyons could escape the business of running Jaguar, although he did have an office in the house and brought work home in the form of prototype cars and production models.

The receptions they gave at their home were talked about for years by those who were fortunate to have been invited. Greta Lyons knew the importance of her husband’s work and this is clearly reflected by the silent support that she gave him.  She was also interested in her husband’s growing farming enterprise and often accompanied him to country and cattle shows.  Greta also supported the local church and was a regular worshipper at Sunday services.

Sir William finally retired in 1972 and he and Lady Lyons had an active and contented retirement with their beloved dogs, Sally, Peppie and Buttons.  Lyons continued to be interested in Jaguar after his retirement although becoming depressed to some degree with its decline during the British Leyland years.  Greta continued to support him, often being tough with him and urging him not to be sorry for himself.  They celebrated their sixtieth wedding anniversary in 1984 by which time Sir William was in poor health and he died on Friday 8 February 1985.  The following year must have been particularly difficult for Greta and Pat said of her ‘She was very lonely afterwards.  She missed him dreadfully.’  Lady Lyons died only 13 months later, in March 1986, having spent over sixty years of her life with William Lyons.

Her contribution to Lyons’ life is best summed up in his own words, made when he retired: ‘I think she must have been a very lonely woman.  But she understood.  I don’t think I appreciated just how much, although I have always realised she had exceptional qualities as a woman.’

In September 1935 at the Mayfair Hotel, London, the Company launched the first car to carry the Jaguar name – the SS Jaguar. When the car was revealed to the assembled journalists, William Lyons asked them to write down a price they expected the car to sell for. The average guess was £632, and there were gasps of surprise when Lyons announced that the car would cost £395 for the 2½ -litre saloon model, the first four-door car offered by the SS Company. Together with the new body and the new name, came a new overhead valve engine, developed with the help of consultant engineer Harry Weslake. The six-cylinder engine gave 102 bhp, a great improvement on the 70 bhp which had been available from the SS1 side-valve engine. 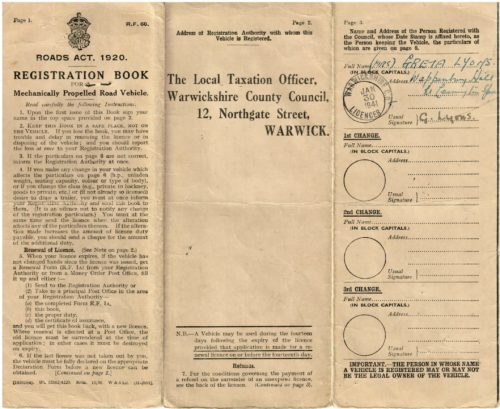 For the first two years, which included Greta’s 2½-litre saloon (chassis number 12462) CDU 700, the Jaguars had coach-built bodies with wood frames, until the Company adopted an all-steel body for the 1938 model year. Although the new manufacturing process caused many teething troubles, it eventually allowed a dramatic increase in production.  Jaguar was the first of the small specialist car manufacturers in Britain to adopt all-steel bodywork.

CDU 700 was moved from storage at Wappenbury Hall to Browns Lane. It is fitting that her example of the SS Jaguar remained with the family before being transferred to the Jaguar Daimler Heritage Trust for preservation. It is a genuine one-owner model that has not been restored and is as original as the day it left the factory. Known affectionately as the ‘Lady Lyons Car’ it is a link to a remarkable lady who was fundamental to the Jaguar story.