From Whitesmith to Blacksmith to Works Director of Radford Plant 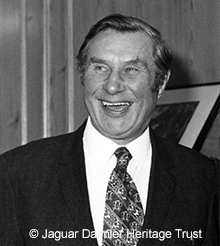 Jack Beardsley, trained as a whitesmith (a worker in tinned metal), joined Swallow in Blackpool when the coachbuilding side of the business was just starting and looking for a trained blacksmith.  He was the first professionally trained production worker at Blackpool and went on to be one of the first senior superintendents in Coventry and stayed throughout the SS and independent Jaguar Years at a senior management level, retiring as Works Director of the Radford Plant in 1970.

Born in Sheffield, Beardsley joined the company at Cocker Street in Blackpool in February 1928 at the suggestion of his friend Bernard Hartshorn who was working as a wing fitter.  Swallow were looking for a blacksmith and Beardsley’s seven years of training and experience at Peter Bromley’s small business near Blackpool made him ideal for the job.  One of his first jobs was to flatten the leaves of car springs of the newly introduced Morris Cowley Swallow to make the vehicle sit lower.  For the Austin Sevens, in order to increase wheel-arch clearance to accommodate the extra weight of the Swallow’s bodywork, his job was the exact opposite, to increase the bend of the rear springs.  He was also responsible for making chain links for production lines and anything else in metal that any other firm might have “bought out”, in fact all component manufacture required in the production of the Austin Seven and Morris Cowley chassis readying them to receive their Swallow bodies.

The workers at Blackpool were a close knit, friendly community and office girl Connie Dickson (later Teather) recalled, “Jack Beardsley was in charge of the anvil.  He belonged to a choir and had a fine voice and I enjoyed listening to him singing at the anvil as he worked – and listening to the boys whistling popular tunes.  It was a very free and easy ‘young atmosphere’, though everybody was always busy working.”

When the company moved down to Coventry in November 1928 Beardsley was promoted to senior superintendent of metalwork and finishing.  Initially Coventry wasn’t very popular with the Blackpool people as the environment was basic to say the least, being a disused shell filling factory from the First World War.  Beardsley, who at the time was trying to get his smithy going, recalled the unpleasant days at Foleshill,  “There was no lighting – nothing… I moved down on November 11th, and it was the coldest winter I’d ever experienced.  It was terrible – we had no lighting, and no heating.  But people didn’t grumble – we’d got 10-gallon (45-litre) oil drums and knocked holes in the side and filled them with coke and that was the heating system”.

With Beardsley in charge, the coachsmithy was upgraded into a tool room which could also produce small body components such as headlamp mounts, windscreen-securing nuts and small pressings for the wider variety of chassis being used; Swift, Standard, Fiat and Wolseley.  He created what was virtually an engineering department, responsible for all welding and modifying of chassis, and the fabrication of an ever increasing number of body components.

When Lyons decided it was time to build complete cars rather than just re-body other manufacturer’s chassis, he didn’t have the capacity to make his own chassis, so had them made up by the Standard Motor Company run by Captain (later Sir) John Black.  These specially designed chassis, fitted with modified Standard engines were delivered to the Foleshill factory for the bodies to be fitted – and SS cars was born -starting with 6 cylinder SS1 and then smaller, 4 cylinder SS2s.

In 1935 as the engineering requirements grew, Beardsley was put in charge of the both the machine shop and the press shop.

Jack Beardsley and his team were involved in building the prototype for a new series of two seater SS sports models.  They shortened the SS1 chassis so that a shorter 2 seater body could be fitted – this was to become the SS90 prototype ARW 395, built in March 1935, the first of only 23 made.

These cut and shut chassis were ‘SS1’ in width and ‘SS2’ in wheelbase and all had the same sequences of chassis and engine numbering as the SS1; although the “90” had its own production body-number sequence

William Heynes joined SS Cars in April 1935 and one of his early tasks was making arrangements for a purpose built chassis for the sports cars, which were to become the SS100, so it was no longer necessary to cut and shut SS1 chassis.

After a time-and-motion analysis of how long it took a team of men to fit-up a painted body, Lyons decided to introduce a new chain-driven “conveyor” assembly line.  Lyons discussed this with Beardsley who “expressed the view which was typical of him ‘there was nothing to it’… it proved to be one of the most successful things we ever did for it saved several thousand pounds and lasted without trouble for very many years” .  In fact it wasn’t quite this simple and despite the hard work by Beardsley, Harry Gill, who devised the mechanism, and others, it took until January 1936 to be fully effective.

As war approached Lyons bid for some of the Ministry supply work receiving contracts for sidecars – building over 10,000 and later for 30,000 lightweight military trailers.  He also bid for contracts on the Manchester medium bomber but when the project was dropped they received work repairing wings for the Whitley bombers.  These new contracts brought in much needed up to date machinery which significantly enhanced their manufacturing capabilities which would not have been possible on their antiquated pre-war machine tools.  The company was also sub-contracted to Armstrong Siddeley making components for Cheetah aircraft engines.

On 14 November 1941, during the worst period of the Coventry blitz, the Foleshill factory was damaged.  Armstrong Siddeley located a run-down shoe factory away from the raids at South Wigston, near Leicester, which was then requisitioned and re-floored to take machine tools and run by Beardsley, manned by between 200 and 300 people.  With Beardsley in charge, this machine shop helped SS gain other specialist work throughout the war including: aircraft bomb doors; long-range fuel tanks; major fuselage sections for the first Meteor jet fighters and gearboxes for Armstrong Siddeley.  After the war, he and his men completed their contract work and returned to Foleshill with Beardsley as machine shop superintendent.

As some of the Ministry equipment wasn’t adaptable, much of his time was spent at Britain’s machine tools sales.  Lyons left the machinery purchase decision making to Beardsley – including the unusual purchase of a pair of Pratt and Whitney borers – ideal for boring the holes through the twin camshafts of Jaguar’s new XK engine.  Beardsley had to inspect these underground, near Calne in Wiltshire, where rifles had been manufactured.

It was largely the experiences of wartime and managing Wigston that set Beardsley up for the bigger responsibilities that took his career from superintendent to Works Director, a post which he held until his retirement at the end of 1969.  When the company moved from Foleshill to the Browns Lane site in the early 1950s he was appointed Machine Shop Manager.

In March 1956, Her Majesty the Queen and Prince Philip were given a tour of the Browns Lane factory.  Along with Sir William, Lady Lyons and the Jaguar board, the royals were introduced to three of the Blackpool people; Beardsley now machine shop manager, Bernard Hartshorn now assembly tracks manager and Harry Teather who had risen to be purchasing manager.

In 1960 Sir William Lyons bought the ailing Daimler Company from BSA, mainly so that he could acquire the Radford Works which he needed to expand the Jaguar Cars business as he was refused permission to extend the Browns Lane facilities.  Beardsley became manager of the machine shops and ancillary departments both at Browns Lane (Jaguar) and Radford (Daimler).  Engine development and production and all machine shops were moved from Browns Lane to Radford in 1965 where Beardsley became overall Works Manager.  He was appointed Executive Works Director Radford Plant in 1966, at its height he was in charge of 4,000 men. 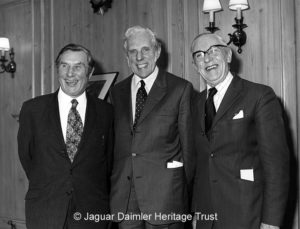 Having been with Lyons from the early days in Blackpool, Jack Beardsley was one of the few colleagues whom Lyons called by his Christian name.  The other exceptions (all from Blackpool) were Fred Gardner, Cyril Holland and Harry Teather.

Jack Beardsley’s retirement on 31st December 1969  was announced by the company in a Press Release dated 1st  January 1970 naming Mr J W Ashworth as his replacement and included the following statement from Sir William Lyons:

“Jack Beardsley joined us 42 years ago and since then he has been responsible for the operation of all our machines shop facilities which, during this period grew from a few general purpose machines, to the very complex and very sophisticated installations in our Radford Factory.  His dedication to his work and his loyalty to the company have been invaluable to the growth of Jaguar, and I wish him a long and happy retirement.”

Following Sir William Lyons’ death at Wappenbury Hall on 8th February 1985 a Thanksgiving Service was held at Coventry Cathedral on 27th February and attended by Beardsley and two of his colleagues from the Blackpool days, Connie Teather (nee Dickson) and George Lee.