From Engineer to Managing Director 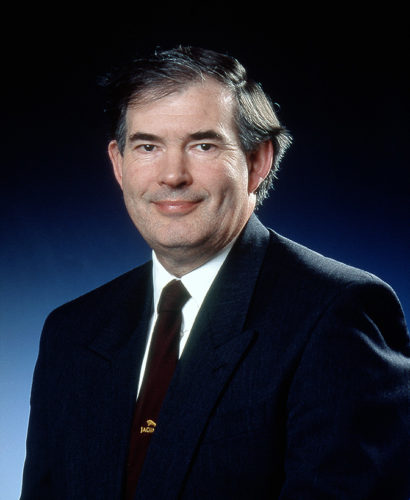 One of the links with Ford and Jaguar was broken on 3 March 2021 when former Managing Director of Jaguar Cars, Michael Ernest Beasley, died.

Mike Beasley was one of the last remaining members of the Jaguar executive committee who was present when Ford bought Jaguar in 1989. Initially, Ford left Jaguar’s top personnel in situ but within a year this had altered with the replacement by Ford of most of the key people at Jaguar, including John Egan; Beasley was one of the few retained by Ford.  He had already weathered the storms of British Leyland and Rover-Triumph-Jaguar as the Company fought to become independent once again.

John Egan recalled: “Mike was part of the gang that saved the company.  His contribution was immense.”   Egan also remembered that shortly after the arrival of just-in-time inventory systems, when Jaguar production was threatened by a snowstorm that prevented it from getting transmissions from a Borg Warner factory in south Wales, Beasley acted.  He commandeered a small group of lorries and Land Rovers and sent them through the snow down to Wales to get the transmissions.  Reflecting on those days Mike said: “What I hate doing is lying down and saying: ‘Oh no, it can’t be done.’  In my book, that’s not an acceptable answer – to say we can’t get the transmissions so we’ll just have to shut down production. It was not in my nature.”

Mike Beasley was born in Slough in 1943, and after graduating, was destined for a career in engineering and later became a Chartered Engineer and a Fellow of the Institution of Production Engineers.  During his early career, he worked at Ford of Britain and was asked to move to take on their Halewood plant.   He did not want to move, so he left and joined Jaguar Cars Limited in 1974 as a Staff Director of the Product and Plant Engineering Team.

There is a sequel to this move, when Ford bought Jaguar the Halewood plant was included to build the new X400 (X-Type) and Beasley was put in charge!  Bill Hayden who came from Ford as Managing Director of Jaguar commented at the time: “He fled Ford Motor Co. to get away from me and winds up working for the same guy!”  Hayden and Beasley had once worked together at Ford’s Transit van factory at Langley.

Beasley’s career flourished further and he progressed through a number of senior management positions, Manufacturing Director (1978), Board Director (1985), appointed as Executive Director Manufacturing and Engineering (1999).

Egan recalled, “He saw the company through the huge industrial relations strife of the late 1970s and early 1980s.  You had to fight the trade unions to do anything.  He just stuck to his task.  He was a real hardworking, straightforward guy.  There was nothing fancy about Mike.”

One of his fights with the unions was over the employment of coloured people.  In 1979 there was a changeover to a new paint-shop and thermo-plastic acrylic paint, at the plant at Castle Bromwich, but with limited colour range (red, yellow and white), not enough sparkle in the paint and a lack of consistency with the finish, there was a problem.

While John Egan walked through Castle Bromwich with Beasley, Beasley remarked, “I haven’t seen a single black face in this place.  Have you?”.  He requested an explanation for the lack of ethnic minority and the response was, “well, the unions vet the applicants before our employment office takes them on and, as you can see, they don’t send up very many black people”.  Harry Adey, Industrial Relations Director, pointed out that was against the law.  Beasley added, “we can’t run a plant with a colour bar.  Not only is it illegal, but it is absolutely against everything we have promised our people at Jaguar.  This is going to stop and stop right now, you’d better bring in the shop stewards straight away”.

Once everyone gathered he told them, “Castle Bromwich stands a small chance of survival and that requires Jaguar fixing all its technical problems and then growing the business to the point where it is viable.  But we are not doing any of this if you continue to break the law.  Now here is my offer.  We employ whomever we choose to employ, from tomorrow onwards, or we bring in the police to find out who has been breaking the law, and encourage the police to prosecute them.  That is the offer, but it doesn’t leave you with much choice.  It’s either us or the police…”.

Jaguar gained proper control of the factory and when production of the Triumph TR7 bodies came to an end, it became a Jaguar-only operation.

By the mid-1980s Jaguar needed to expand the Browns Lane site and Beasley was in charge of the project.  The Allesley & Coundon Wedge Conservation Society (founded in the 1970s to protect  the local area) wanted Jaguar to build an underground tunnel to deal with the traffic, but this was far too costly.  The preferred solution was to build a new perimeter road around the factory and a new car park.   In 1991 the Lord Mayor of Coventry and Beasley opened the Coundon Wedge Drive project which had cost around £4 million, £2 million of which Jaguar had to pay.

To the local community’s relief, the project diverted 95% of the traffic from Browns Lane which meant employee cars were no longer left parked at the kerbside.

Under Ford’s ownership Jaguar improved and Beasley, as Manufacturing Director, proved he could be very good, given the proper resources.  Jaguar quality improved with a healthy infusion of cash and Ford know-how.  Credit must go to Ford who left Jaguar veterans like Beasley in charge.  Beasley’s career continued its upward path, becoming Assistant Managing Director and together with Jonathan Browning who was Jaguar’s Managing Director from 1999 to 2001, set out to implement the ‘6 Sigma’ process with the intention to improve quality of all operations.  In 2001 Beasley succeeded Browning as Managing Director and remained at the helm until his retirement in 2003, aged 60.

Roger Putnam, who joined Jaguar under Egan, and was former Jaguar Global Marketing Chief and later Chairman of Ford of Britain recalled:  “Mike was held in very high regard by both local and national union officials.  Jaguar’s record on union relationships is pretty good, which owes a lot to Mike’s personality and ability.”  He added: “Mike was a very personal man in many ways but very passionate about things he loved – like cameras, he had some really rare models.  I sold him a couple of mine.  His death is indeed sad news.” 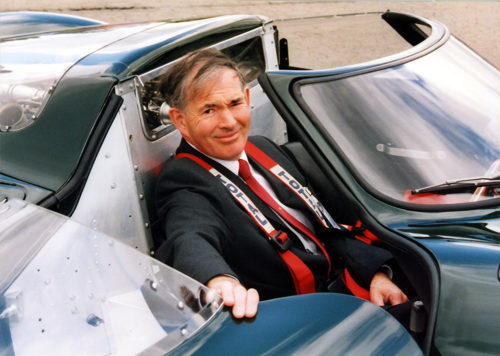 Beasley had many hobbies, among them was the collecting of old cameras some from the early days of photography, but they did not gather dust on a shelf.  Where materials were no longer obtainable, Mike made his own, coating plates and paper with long forgotten emulsion made from original formulae.  He enjoyed talking about his hobbies but only if you were interested, he never bored one about it.  As an engineer he was always fascinated by the way things work.  He built two working model steam locomotives and a miniature railway in the back garden of his home in the village of Balsall Common. The five-inch (12.7 cm) gauge track stretched for 200 meters and when he was in better health there was nothing he liked more than driving the locomotives and taking his grandchildren for rides.

John Maries, who worked with Beasley at Jaguar and was later Executive Director of the Jaguar Daimler Heritage Trust (JDHT) recalled: “Part of the JDHT’s leaving present for Mike was a pair of cast iron station signs for his garden railway.  I’d had a brief interest in the LNWR railway, at some point, and the signs were made up, by the “volunteers”, according to precise specifications (size, typeface, spacings and borders etc) of that railway, and, subsequently, painted by Coventry Transport Museum. F rom memory, one of them said, “Change here for Browns Lane, Whitley and Halewood.  Mike was one of the good guys”.

In the 2002 New Year’s Honours List, he was awarded the CBE for his work with the Birmingham New Deal Task Force, although he was also involved in a number of other employment initiatives, many promoting engineering related opportunities.   Beasley was interested in improving the image of the engineering profession and working hard to interest more young people in an engineering career, had become a personal ambition.  He once explained that: “We’re (Jaguar) doing some school programmes where we have classrooms in the plants.  Students can walk into the plant and see what they’ve learned applied in the factory.  Jaguar plants are very clean and high tech.  [Students] pick up a different image to the misty, oil-ridden dirty myth.”  Beasley was also a visiting Professor in Engineering Management at Coventry University. 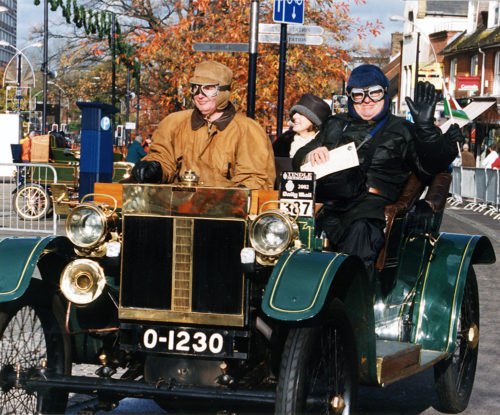 After he retired from Jaguar in 2003 and devoted his time to his many other interests.  He was chairman of the West Midlands CBI, a member of the National Employment Panel, chairman of the Birmingham Employer Task Force and Chairman of Skills4Auto, the Midlands hub of the newly launched Vehicle Academy.  In 2017 he was awarded an Honorary Life Fellowship in recognition of his contributions to Coventry University.

Beasley was a valued Trustee of the Jaguar Daimler Heritage Trust and attended board meetings on a regular basis.  He took a keen interest in the Trust and its collection of vehicles; he would drive them when required and took part in the annual London to Brighton Veteran Car run driving one of the Trust’s eligible vehicles.  He was one of those behind the planned Jaguar halls in the Coventry Transport Museum where some of the JDHT cars trace the history of Jaguar.  As he said when the Gallery opened:  “The new gallery will tell the story of Jaguar’s fascinating evolution, from its humble beginnings to the world class car manufacturer it is today.”

Sadly Mike suffered a stroke a few years ago but in his usual determined manner conquered the illness to return to JDHT matters.  I [François Prins] last spoke with him early in 2020 when he attended a Trust meeting at Gaydon, though he was not in the best of health he was still sharp and his sense of humour had not left him.  He will be missed by all who knew and worked with him.

Unfortunately, another stroke took Mike on 3 March.  As former director of JDHT and a long-standing friend and Jaguar colleague of Mike’s, Martyn Hollingsworth wrote on hearing of Mike’s death: “During the past few months, Mike’s health had deteriorated and we were appreciative of his involvement in the Trust’s activities until a short time ago.  We will remember Mike as a great supporter of our work, a thoughtful and experienced man with whom we could share our own thoughts and ideas … but most of all, a friend in which we shared a common interest.  As an active member of the Trust’s Board and Operations Committee, he was close to many of the major initiatives undertaken by the Trust.  Mike was a long standing and highly respected Director of the Trust and his passion for the Jaguar and Daimler brands will be sorely missed by all who knew him.”

Mike was a widower, his wife Lynn died a few years’ ago, he is survived by his children and grandchildren.

Many tributes have been paid to Mike and this from Sir John Egan is fitting, he said of him“… [that] he had a huge affection for Jaguar.”