Jaguar Importer in Denmark and an Important Collector of Classic Jaguars 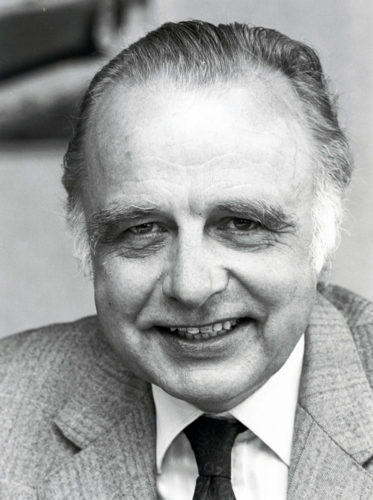 Ole Sommer was born into the motor trade on 6 March 1931, so there were “oil stains on his diapers”!  His father Erik ran a Ford dealership in Copenhagen, owned by Erik’s father-in-law, but struck out on his own during World War Two and among other ventures, organised a scheme for collecting fir cones to feed the producer gas generators which kept at least some of the Danish vehicle fleet on the road during the war years.

When the war was over in 1945, Erik managed to obtain agencies for a number of vehicles, mostly British, among them Jaguar and Jowett, Guy commercials, and Gardner engines.  Tragically, Erik was killed in an accident in Germany in 1952.  At the age of 21, Ole as the only child had to take over running the family-owned company, while at the same time completing his studies for an engineering degree.  His degree project was a design for an advanced 1.5-litre Grand Prix racing car engine – which he later admitted would not have worked! – but he still passed.

Ole had already spent two years as a volunteer pupil with Jaguar and Jowett in England, and was very proud that Jowett gave him a “certificate of competence” as a toolmaker.  He claimed to have been the prototype for the apprentice scheme which Jaguar subsequently introduced.  He also made some life-long friends in the Jaguar world, including “Lofty” England, Bill Heynes, and later Andrew Whyte.

To supplement the Jaguar import, Ole got into the business of selling marine engines and making propellers.  After Jowett ceased production in 1953, he took on retail agencies for other makes of car.  In 1957, he became a dealer for Volvo cars and commercial vehicles, which he ran as a separate business.  He acquired the Royal Warrant through selling Jaguars to HM Queen Ingrid of Denmark, and in 1958 supplied a Volvo Amazon, the first car of the then Crown Princess, later HM Queen Margrethe.  The Sommer company became the largest Volvo dealership in Denmark. 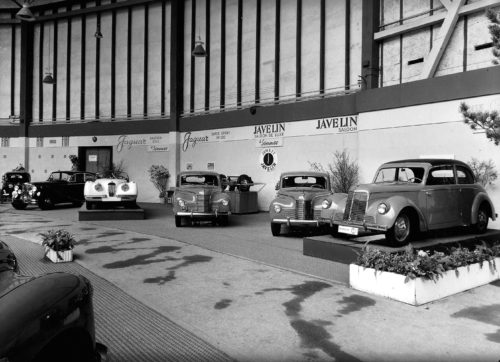 Erik Sommer had designed and built a prototype for a small saloon car using Jowett and Bradford components in 1949, the S1; it was displayed at the first post-war Copenhagen Motor Show in 1950, together with an alloy XK 120 (670105), Mark Vs, and Jowett Javelins.  He and Ole followed this with a fastback coupé based on a Jowett Jupiter chassis in 1952 – a car which for some years was owned by the author [Anders Clausager].

The design was inspired by some of the advanced Italian designs of the period.  The shape was arrived at by constructing a skeleton of the body out of welding wire, on the actual chassis, and then a craftsman would form the aluminium panels over this.  It was the intention to produce a small series of similar cars but hopes were dashed, in part because of Erik’s tragic death.

However, Ole inherited the creative genes and the desire to make his own car.  In 1959 he built a Volvo-based coupé, using a van chassis, and some of the bodywork from the Amazon saloon, supplemented by various Jaguar parts.

This was constructed by methods similar to those employed for the Jupiter, and this car is now in the Sommer Museum.

Ole found time to develop two distinctive cars of his own, based on Volvo components.

The Joker of 1971-72 was a cross between a beach buggy and a half-timbered cottage, with an external space frame of square tubing.  Ole clearly stated that it was not to be taken too seriously – but he made seven of them.

In 1981, he tried again with the OScar (Ole Sommer Car), this had a more conventional chassis, and used a fibreglass body based on the BRA kit car which in turn had been copied from the AC Cobra design.  He made about 20 of them, 17 of which were exported.

Another side-line was in airport crash tenders, built on Volvo truck chassis. 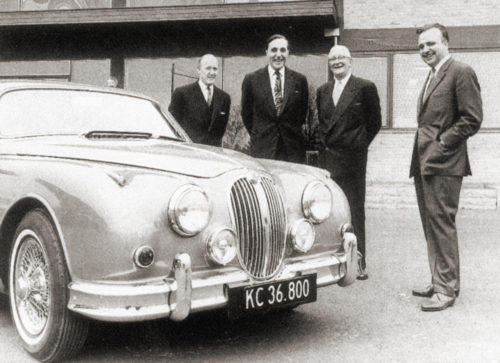 As the business expanded, the Sommer company moved to new premises at Nærum on the outskirts of Copenhagen, which were opened by Sir William Lyons in 1965.

When British Leyland reorganised their foreign sales companies after 1968, Ole lost the Jaguar franchise, after he and his father had sold 1,265 cars between 1946 and 1970.  The best-seller was the Mark II of the 1960s, when in a good year the company might sell 100 Jaguars.

However, the Volvo business went from strength to strength, both with cars and commercial vehicles.

Later on, Volvo told Ole that he had to choose between the agencies, either for cars or for commercials: he chose the latter, because it was a more profitable business.

The germ of the Museum was Ole’s first classic car which he bought in 1960, a 1938 SS Jaguar 100 (chassis 49037) which “Lofty” England found for him in England.  It cost him £475! – which scandalised the bookkeeper of the Sommer company.   He had it painted a striking metallic green which the car still wears.  I think he later came to be more appreciative of the importance of originality.

The SS 100 became the start of the impressive collection which he built up over the years, including many other classic Jaguars such as a C-type and a D-type, but also Volvos, Jowetts, and other cars which Ole found interesting.  The C-type was the ex-John Simone and Marcel Fleury car XKC 027, which Ole bought from Fleury in 1975.  In his ownership it was well-used in many events, both on road and track, bearing his personal registration plate OS, and often entered under the name “Equipe Été”, “été” being French for “Sommer”.

The D-type was the ex-Richard Ropner car XKD 514 which Ole acquired from the Robert Danny collection in 1976, and this car, too, has seen regular use, but always in a sensible manner.  Since it has effectively had only about three owners, it remains probably one of the most original and least messed-about-with D-types. 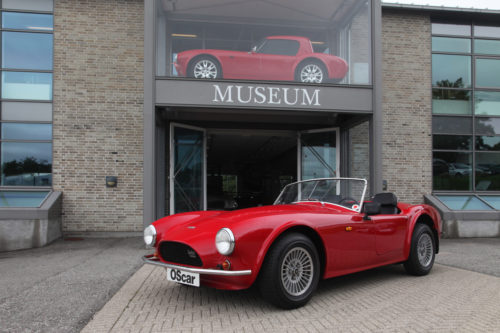 It was at Nærum that Ole eventually built the Sommer Museum to house his growing collection of classic cars, which now numbers more than 80, ranging from a tiny Renault 750 to an imposing Rolls-Royce Phantom II.

The museum opened in 2004, and after selling the Volvo business in 2003 Ole kept his own office there, as museum curator, happily giving guided tours to visitors.

With great foresight and generosity, Ole established the Sommer Foundation which assumed ownership of the museum and his collection.  He also offered a home to the Danish Veteran Car Club which has its offices and extensive library here.  In 1991 Ole had been the organiser of the first C-type tour to Le Mans, celebrating the 40th anniversary of the first Jaguar win at Le Mans.

Ole organised the first three Copenhagen Classic Car Cup race meetings, in 1996, 1998, and 2000.  Another hobby was sailing, Ole was a competent yachtsman, and even bought a company which at one time made 3,000 Optimist fibreglass dinghies per year. 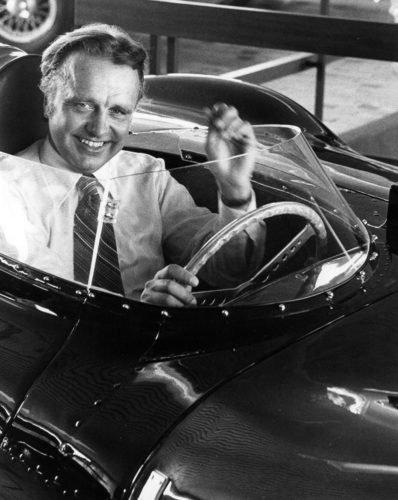 Ole was highly regarded for his business ethics, it was famously claimed that he would not sign a contract of more than one sheet of A4 paper, and he applied the same straightforward approach to all of this ventures.  He considered himself fortunate to have the support of a first-class team, he valued his staff, and was rewarded by their loyalty in return.  He could not easily be persuaded to change his mind against his own instincts, but as it turned out, he was right most of the time!  He became a respected and much-loved elder statesman and authority in the world of classic Jaguars, especially C- and D-types.

I [Anders Clausager] first met him in 1974 when I had just got the Jupiter coupé back on the road, and boldly drove it to his Volvo dealership to show it to him.  He received me kindly and we had a nice chat.  We stayed in touch on and off over the years, meeting in Denmark or England.  He did refuse the Jupiter when I offered to sell it to him – but later bought another Jupiter for the museum – although one car which I had previously owned, did find a place at Nærum, a 1947 Jowett Bradford pick-up.

I last met up with him in Denmark in June 2014 when we were working on the Jaguar C-type etc. Register, which he generously sponsored.  He drove a clapped-out Volvo estate car and refused to use a seat belt!

In 1960, Ole married Bea who had come to Denmark from Switzerland.  They had three sons and a daughter, and eleven grandchildren.  It was a happy union, punctuated every year on the anniversary of their wedding day, when Ole had to propose all over again!

He did not enjoy the best of health in later years but still took much pleasure from his museum and his cars; one of the final acquisitions was one of the very first Volvo touring cars, from about 1927, which he bought from a Swedish collector.

His achievements in the field of historic vehicles were recognised posthumously by FIVA which awarded him and the Museum a Special Culture Award in 2017 – the citation was as follows:

Finally, the FIVA Culture Commission would like to thank Motorhistorisk Samraad and Mr. Henning Thomsen for an application originally sent in 2017, nominating Mr. Ole Sommer for a Culture Award for Dedicated Service.   We’re pleased to confirm that the Commission has agreed to present a Special Culture Award in recognition of the wide-ranging and passionate commitment to historic vehicles, and Jaguars in particular, demonstrated throughout Mr Sommer’s life.