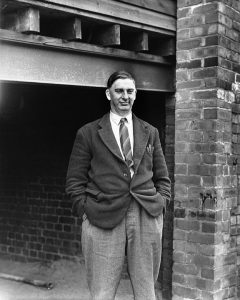 Jaguar Cars was fortunate to employ several engineers of note and one of the most gifted was Walter Hassan.

Walter Thomas Frederick Wally Hassan was born in North London on 25 April 1905, his father kept a clothes emporium in Holloway and the young Hassan would often visit the shop.  An uncle was keen on making model ships and Wally was fascinated by the process.  From an early age he showed a natural aptitude for mechanical things and his model-ship-building uncle encouraged him to learn about engineering.  Wally was enrolled at the Northern Polytechnic in Hackney, near to the family home, to study engineering among other subjects.  This Polytechnic was rebranded as the London Metropolitan University in recent times.

Hassan excelled in his studies and obtained his first job as a fifteen-year-old with W.O. Bentley who had only recently built his first Bentley motorcar and was gearing up for production; Hassan was employee No. 15 paid 10 shillings (50 pence) per week.  He started as tea boy and general dogs-body before becoming a fitter in the engine shop then moving on to the chassis shop, thus gaining a complete experience of the 3-litre cars then in production.  He was encouraged to become a member of the Institute of Automobile Engineers, studying part time at the Regent Street Polytechnic and passing his membership exams.  Hassan was a valuable employee and was well thought of by Bentley who encouraged the boy to learn all aspects of the Bentley cars.  Hassan moved on to road testing work under Frank Clement, then the head of experimental department and Bentley’s professional racing driver.  He even rode as the mechanic in some races and when not racing he was part of the Bentley Motors service department and was regarded as the best Bentley mechanic and taken up by Woolf Barnato, the famous Bentley driver and also the main shareholder and Chairman of Bentley Motors.  Barnato valued Hassan’s work and trusted him implicitly; the two men got on well and remained life-long friends.

Unfortunately, Bentley Motors suffered during the depression and sales of their road-going cars slumped, racing had taken a toll financially and the business was put into liquidation.  Rolls-Royce stepped in and (anonymously) bought the company in late 1931.  Barnato, who had spent thousands (millions in today’s values) in subsidising Bentley kept Hassan as his personal mechanic to maintain his various race and private cars.  Hassan built his own car, the Barnato-Hassan, in 1934; this was a Bentley-based special with a 6 1/2-litre engine, which was driven by Barnato and Dudley Froy at Brooklands.  Later this car was fitted with an 8-litre Bentley engine and driven by Oliver Bertram, during practice for the 1935 Easter meeting, lapped the bumpy Brooklands track at 140 mph.  Bertram drove the green Barnato-Hassan car in several races at Brooklands and often averaged over 128 mph; at the August Bank Holiday meeting in 1938, Bertram drove the car, now with a new slim polished aluminium body, to second place, with a lap speed of 141.49 mph.  For the 1936 season, Hassan and Wally Saunders built another Bentley special for E. W. (Bill) Pacey.  Hassan designed his own specially-pressed chassis side-members to produce a proper central-seater instead of the Barnato-Hassan’s offset layout; that and the 4½ -litre engine were clad in a slim body by Thomson & Taylor.  Known as the Pacey-Hassan it raced successfully at Brooklands and elsewhere, sometimes against the Barnato-Hassan.  Both cars have survived to the present and are often seen at vintage racing events in the country

The famous racing driver Raymond Mays had noted Hassan’s skills with engines and in 1937 offered him a job with his ERA stable in Bourne.  Hassan worked there with Peter Berthon on engine development and at Brooklands with Thompson and Taylor on ERA chassis development.  In later years Hassan commented that he was not as happy with Mays as he had been with Bentley and Barnato.  In  1937, after only six months at Bourne, Reid Railton asked him to return to Thompson & Taylor to work on a 400 mph Land Speed Record car for John Cobb.  Railton remained the designer throughout, Hassan’s job was to manage contracts and make the project happen, with the result that Cobb twice broke the Land Speed Record in the streamlined twin-engined machine.

At the September 1938 meeting at Brooklands, William Lyons asked his old friend Tommy Wisdom what he thought about an engineer called Walter Hassan.  Although he had never met Hassan, Lyons had heard his name mentioned over the years as one of the best in the business.  SS Cars was developing fast and Chief Engineer William Heynes needed an assistant to take some of the workload.  Wisdom gave Hassan an excellent reference during the conversation with Lyons and the result was that the two men met and Lyons offered him a job at Foleshill.  He joined SS Cars later that year as Chief Experimental Engineer and, at first working on ‘sorting out’ problems with the rear suspension on Sam Newsome’s SS 100 before going on to tuning the SS 100 engines for racing.  His main work was to be focussed on a new SS chassis with independent front suspension.  Hassan liked the work at SS Cars and had a good working relationship with Lyons, as he recalled later in his life:  “If you were honest with him (Lyons) he appreciated it.  You had to have the courage of your convictions.  When I first joined I found him rather formal but as we got to know each other I found that he was quite approachable and would listen to one’s point of view.  It always paid to be fair and square with Sir William.” 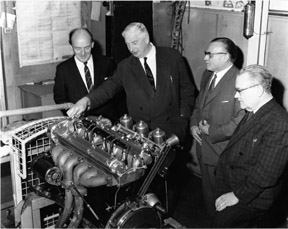 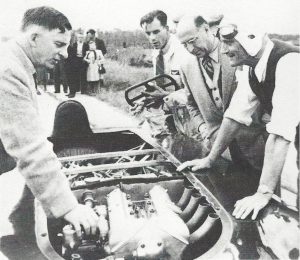 Walter Hassan and Colonel Gardner
(with helmet and goggles)
contemplate the 2-litre XK engine in the record breaking car at Jabbeke.

On the outbreak of war in September 1939, Hassan left SS Cars to work on aircraft engine development at the Bristol Aircraft Company at Filton, but was back at Foleshill a year later.

Hassan was one of the engineers who were on fire watching duties at the Foleshill factory during the war and it was on these night gatherings that he, Heynes and Claude Baily (who joined SS from Morris Engines in 1940), would discuss, with Lyons, a post-war engine – the XK engine.

Hassan later recalled: “Lyons was enthusiastic about SS plans for the post-war years and would listen to us discussing the engine, which he said had to ‘look good’.  He was not an engineer but he was good at gathering a good team around him.” 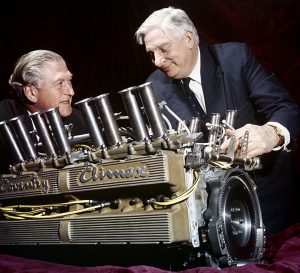 Having seen the XK engine through its development phase and installed in the XK120, Hassan left Jaguar and joined Coventry Climax.  Here he worked with Harry Mundy on an engine; they designed the FW (Featherweight) lightweight overhead camshaft unit intended for use for fire pumps.  The FW was developed over the years and served faithfully with most of the fire departments in the UK; they also saw service with fire-fighters overseas.

Having designed an efficient lightweight engine Mundy and Hassan continued developing the FW for use in motor racing.  Colin Chapman of Lotus was one of the first to see the potential of the unit and Lotus F1 cars were soon winning races.  Driving a Coventry-Climax-powered Lotus, Jim Clark became World Champion twice with Team Lotus.  Coventry Climax engines gave Lotus further successes in Formula 2 and in the Le Mans 24 hour race.

Walter Hassan continued his work on the race engines until 1963 when Jaguar bought Coventry Climax, bringing Hassan back into the fold along with his fellow engineer Harry Mundy.

Jaguar now had four of the most talented engineers in the country under one roof.  William Heynes and Claude Baily had been working on a V12 engine and they now added the talents of Hassan and Mundy to redesign and work on the project.  The origins of a Jaguar V12 engine can be traced back to 1952 when an ‘XK 4.9-litre V12 engine’ is noted in a list of Jaguar Works Order Numbers for experimental projects.  In effect the unit consisted of two six-cylinder XK heads mounted on a new V12 block.  Such a unit was intended to power a proposed Le Mans-type racing car and a variant to be used on saloon models.  When Hassan returned to Jaguar he inherited the various drawings made by Baily and Heynes and set to work with Harry Mundy on a revised design.  Hassan found the existing V12 too heavy and would not fit the saloon car for which it was intended, the Jaguar XJ6 then in design.

Together with Harry Mundy, Hassan set about designing an alternative V12 engine, with various configurations being proposed and tested.  Heynes, as Chief Engineer, and Baily were both closely involved with the new unit and eventually, after many years of testing, the 5.3 litre Jaguar V12 was unveiled in 1971.  It was fitted to the E-type Series III, XJ-S and the XJ saloon which was known as the XJ12.  Daimler versions of the XJ12 were called ‘Double-Six‘, bringing back a famous Daimler model name from pre-World War Two days. 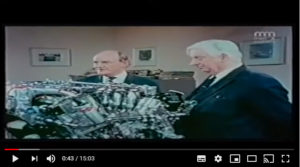 There is an interesting 19 minute video on YouTube of Raymond Baxter interviewing
Walter Hassan and Harry Mundy about the V12 engine. 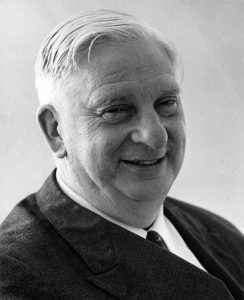 In 1971 Hassan was awarded the OBE for services to the motor industry and he continued to develop the V12 engine until he retired from Jaguar on 28 April 1972, being succeeded by his deputy, Harry Mundy.

In retirement he remained active with various engineering projects and consultancy work well into his eighties.

Following the death of his wife, Ethel, he lived with one of his sons and later he moved to a BEN Motor Industries Home at Easenhall in Warwickshire where he lived with some of his contemporaries including Jack Fairman.

In April 1995 he celebrated his ninetieth birthday with a party where many of his old friends and colleagues paid tribute to one of the great automotive engineers.