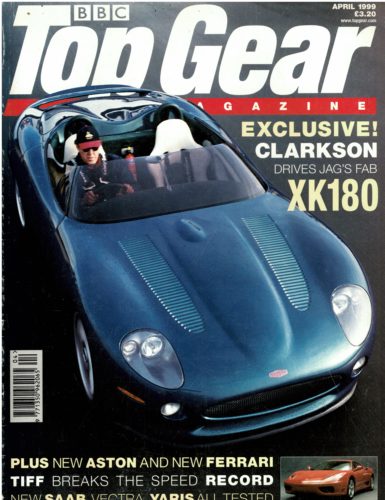 They’ve looked at it, listened to it, even used computer tricks to pretend they’ve sat in it but until Jeremy stepped up to the oche, no journalist in the world had actually driven Jaguar’s great, smashing, super XK180

Jeremy Clarkson was the first journalist in the world to be allowed to drive it, taking it round Silverstone circuit at speeds up to 140 mph on the Hangar Straight.

His article finishes with a question about whether or not Jaguar would ever put it into production and his parting shot is ‘I’ll be the first in line.’

We do not have permission from BBC to reproduce the article here in full but it is an excellent read and there are generally copies of the magazine available for sale on Ebay.

Just enter ‘top gear magazine april 1999’  into Ebay’s search box and you should be in luck.