XK180 started the process in 1998.  Now the F-type concept car, first shown at the Detroit Auto Show on January 11 [2000], looks likely to complete it: the arrival of an authentic, modern equivalent of the E-type.

The F-type concept is the direct result of Dr Wolfgang Reitzle assuming charge of Jaguar as chairman.  After many years with BMW he brought a huge technical expertise; but more than that, he brought an outsider’s perspective of Jaguar and what the marque should stand for.  To him, Jaguar means “excitement and performance”; and much of his input has been aimed at giving the product more of these qualities.  He appreciated that the XK8 inherited the XJS’s role as a fast, luxurious and rather expensive Grand Tourer.  He knew it was no E-type but he also knew the world wanted an E-type.  And thanks to him it looks like we’re getting one. 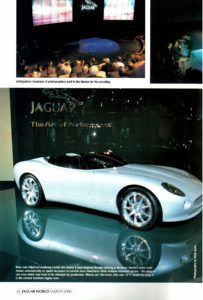 The design task fell to Keith Helfet, Jaguar’s longest-serving senior stylist; he took up the work after director of styling Geoff Lawson had made some initial sketches (drafted during the morning of the day when he died so tragically in June last year [1999]).  Keith had worked with Sir William Lyons during the 1980s and had absorbed much from Jaguar’s original styling maestro, especially while he was developing the still-born E-type replacement, the XJ40-based XJ41.  Subsequent Helfet designs which did see the light of day include XJ220 and XK 180.

“Dr Reitzle suggested we do a roadster inspired by the 180, a modern E-type”  Keith told us.  “For the first time in Jaguar’s history this was to be a design exercise which didn’t have to conform to any existing package.  I had total freedom to do what was right, to put wheels and engine where I thought they should be for ideal, 50/50, sports car weight distribution.  So these elements are pushed back. 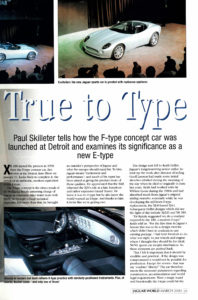 “But I felt it important that it should be credible and practical – if the design was compromised it would not be possible for production.  Except the screen – that was my ‘roadster’ liberty!”   The car therefore meets the necessary parameters regarding construction, accommodation and world legal requirements.  Wave a magic wand and functionally the F-type could hit the road tomorrow.

Keith’s theme did indeed take inspiration from Malcolm Sayer’s E-type, just as his XJ41 concept had – and certain XJ41 features can be seen in the F-type, such as the waistline crease and even the inset rear lamps (see JW Vol 10 nos 6,7 and 8 for full XJ41 story).  The remainder is a re-interpretation of E-type’s nose and bonnet plus a blending of XJ220, XK 180 and entirely new shapes in a totally modern idiom. 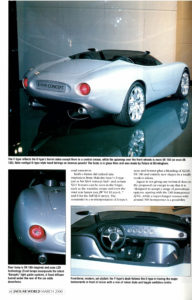 Jaguar is not giving an technical data on the proposed car except to say that it is “designed to accept a range of powertrain options, starting with the 240 horsepower AJ-V6… while a supercharged version with around 300 horsepower is a possibility.

Automatic or manual transmission would drive the rear wheels, while all-wheel drive is a production-feasible option.”   The  most likely starting point for the F-type is the X400, the new ‘baby’ Jaguar saloon scheduled for autumn 2001 [X-type] which uses a derivation of a small-Ford platform.  Logically, therefore an F-type would be built at Halewood – more good news for the Merseyside workers!

I would also concur with his inclusion of the XK 120: although prior to its display there was an intention to build it in small quantities, the show car was little more than a last-minute mock-up designed to publicise the new XK engine (itself evolved for the Mk VII saloon). 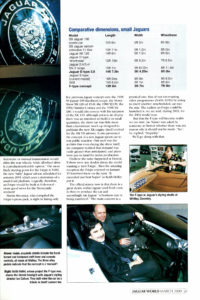 It also presented the concept of a new Jaguar sports car to test public reaction – but such was the acclaim that even during the show itself, the company realised that demand was vastly greater than anticipated, and plans were put in hand for series production.

I believe the same happened at Detroit.  If there were any doubts about the world wanting a ‘new E-type’, then the amazing reception the F-type enjoyed on January 11 banished them on the spot.  “It exceeded our best hopes” as Keith Helfet put it.

The official stance now is that there is a great desire within Jaguar (and Ford come to that) to produce the car and accordingly, say Jaguar, “a business case is being examined.”   The main concern is a practical one: that of not interrupting other programmes (X400, X350) by trying to insert another, unscheduled, car into the mix.  The earliest an F-type could be launched is, we are told, during 2003, for the 2004 model year.

But that the F-type will become a reality we are sure. Jac Nasser was asked by someone at Detroit whether was any reason it should not be made.  “Yes”, he replied “Stupidity.”

We’ll go along with that. 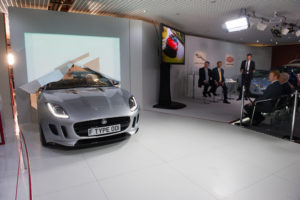 No evolution of this F-type concept car ever made it to production.

The F-type launched in 2013 took design cues from the CX-16 of 2011, which with its petrol-electric hybrid drive, itself never quite made it into production.  The body style and shape did, with very few changes, in the form of the Jaguar F-TYPE which was launched in both coupe and convertible versions.

The first production F-type, is now in the care of the Jaguar Daimler Heritage Trust, on display in Coventry Transport Museum.  This is a convertible, chassis number 001, and left the production line in Castle Bromwich (not Halewood) on 4th March 2013.