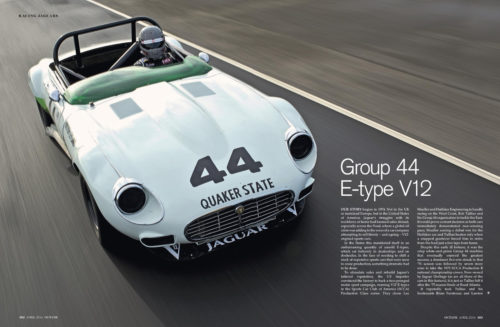 OUR STORY begins in 1974.  Not in the UK or mainland Europe, but in the United States of America.  Jaguar’s struggles with its workforce at home had harmed sales abroad, especially across the Pond, where a global oil crisis was adding to the woes of a car company attempting to sell thirsty – and ageing – V12 – engined sports cars.

In the States this manifested itself in an embarrassing quantity of unsold E-types, which sat forlornly in dealerships and on docksides.  In the face of needing to shift a stock of expensive sports cars that were soon to cease production, something dramatic had to be done.

To stimulate sales and rebuild Jaguar’s tattered reputation, the US importer convinced the factory to back a two-pronged motor sport campaign, running V12 E-types in the Sports Car Club of America (SCCA) Production Class series.  They chose Lee Mueller and Huffaker Engineering to handle racing on the West Coast, Bob Tullius and his Group 44 organisation to tackle the East.  It would prove a smart decision as both cars immediately demonstrated race-winning pace; Mueller scoring a debut win for the Huffaker car and Tullius beaten only when a snapped gearlever forced him to retire from the lead just a few laps from home.

Despite this early ill fortune, it was the crisp white-and-green Group 44 machine that eventually enjoyed the greatest success; a dominant five-win streak in that ’74 season was followed by seven more wins to take the 1975 SCCA Production B national Championship crown.  Now owned by Jaguar Heritage, this car is just as Tullius left it after the ’75 season finale at Road Atlanta. 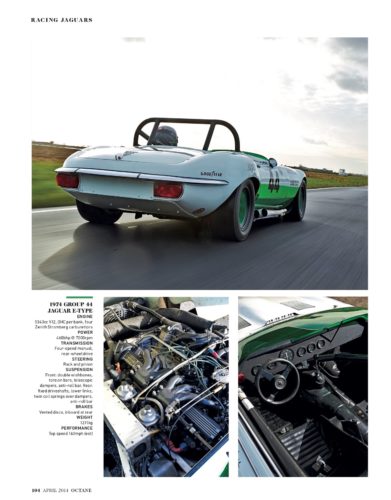 It reputedly took Tullius and his lieutenants Brian Furstenau and Lawton ‘Lanky’ Foushee some 3,500 hours to turn the Series 3 E-type into a racing car.  That tells you much about SCCA’s so-called production class regulations, and how much work was needed to strip the E-type – which had aged about as well as Elvis – of its excess weight.  Four decades later, the transformation they effected remains truly spectacular.

Perhaps it’s because we’re so conditioned to the look of Lightweight and semi-Lightweight E-types that Group 44’s Series 3 V12 Roadster looks so outlandish.  Skateboard flat and sporting a quartet of white serpentine sidepipes, it’s a real hot rod.  A vestigial chin spoiler juts from beneath the chromed radiator grille, while blacked-out headlights give it the dead-eyed stare of a Great White Shark.  In place of the regular windscreen, there’s a lowline aeroscreen fashioned from green Perspex to save weight, reduce drag and co-ordinate with Group 44’s striking livery.

There’s no graceful or respectful was to get in over the door and drop down into the low-backed bucket seat.  You sit in a reclined position, arms outstretched to clasp the small-diameter, fat-rimmed steering wheel.  That weird aeroscreen casts a green glow over the flat dashboard and its array of six dials.  A big red oil pressure light sits to the far left and a hefty length of rollcage tubing brushes your left arm.  To your right another branch spears into the passenger footwell.  Its presence is reassuring when your head and shoulders are poking up above the E-type’s waistline.

Beneath that long bonnet lurks a raucous development of Jaguar’s 5.3 litre V12.  Running on a quartet of Stromberg carburettors with extensive baffling in the sump to combat oil surge, it’s good for 460 bhp.  In a car weighing around 1,200 kg, that makes for an explosive power-to-weight ratio.  It’ll rev to 7,000 rpm, but we’ll be limited to 6,000 during today’s test.  As the track is cold and damp, I suspect that’ll be more than sufficient.

To be honest, I’m not entirely sure what to expect from a car whose underpinnings go back to the 1950s, but power steering is definitely a big surprise.  The awkward driving position means it’s a real stretch to slot the gearlever forwards and across from second into third, but the clutch isn’t too much of a workout and the gearshift itself has a long throw but a clean, well-defined gate.

The steering is very light and the rack quick, which makes the front end feel super-responsive.  Your inputs are wristy and require little in the way of physical effort, each direction-change dispatched far more keenly than you’d expect of a 40-year-old car with a long, heavy V12 engine over the front axle.  You have to be mindful of not asking too much from the front end, for ultimately it can’t quite keep pace with the reactions of the steering, but calm yourself down a bit and the E responds accordingly.  It’s faithful and intuitive.  Fun, too, if you like a car that can be steered by the rear end as well as the front. 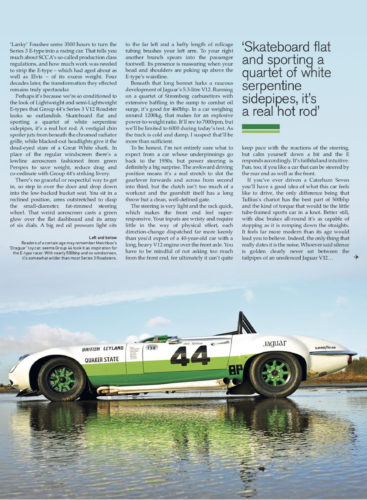 If you’ve ever driven a Caterham Seven you’ll have a good idea of what this car feels like to drive, the only difference being that Tullius’s chariot has the best part of 500 bhp and the kind of torque that would tie the little tube-framed sports car in a knot.  Better still, with disc brakes all-round it’s as capable of stopping as it is romping down the straights.  It feels far more modern that its age would lead you to believe.  Indeed, the only thing that really dates it is the noise.  Whoever said silence is golden clearly never sat between the tailpipes of an unsilenced Jaguar V12…