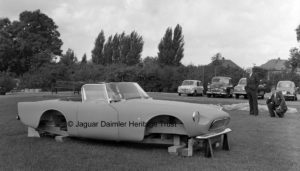 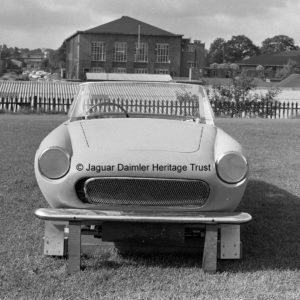 Sir William designed what would become SP252 as a replacement (or Mark II) version of the SP250.  Chassis 100003 was fitted with rack and pinion steering as an improvement over the standard Daimler steering box.  It was also fitted with torsion bar front suspension, the same as the E-type in an attempt to improve road-holding although the car was said to be unstable.

Sir William styled the body and Fred Gardner, who ran Jaguar’s prototype bodyshop, and was the master at interpreting Sir William’s designs, built a wood and fibreglass mock-up at Browns Lane.  While Sir William wasn’t ecstatic about the mock-up he gave the go-ahead to develop it further.

This prototype was never registered and was later dismantled at the factory and scrapped.

A full fibreglass body was then made and fitted to chassis 100004 based on standard SP250 running gear.

The car was painted maroon and had a grey leather interior.  Sir William had included many styling cues from the E-type which was proving to be a great sales success following its launch in Geneva in 1961  The front wing design was changed radically, looking to many people, like those of an MGB.  The Daimler SP250 had sidelights above the headlamps, these were removed, dropping the wing line, and replaced with sidelights from the Jaguar E-type below the headlamps.  The distinctive flared wheel arches were removed from both front and rear wings producing a much cleaner, smoother line to the bodywork.  The other major change to the body was the replacement of the ‘grinning fish’ grille with a much cleaner, more modern grille and slim-line bumpers with E-type over-riders.  There was however very little change to the rear wings. 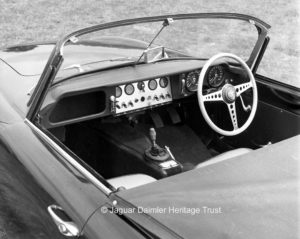 The interior could almost have been lifted straight from an E-type with the rev counter and speedometer in front of the driver.  A central panel, finished in aluminium, contained the four smaller gauges, the light switch, ignition key and ancillary switches.  The sliding heater and choke controls were likewise identical to those in an E-type.  The adjustable wood-rimmed steering wheel, handbrake and even the windscreen, interior mirror and strut, and windscreen vents came from the E-type parts bin.

There were other improvements under the covers with bonnet and boot-lid being fitted with spring-loaded hinges – a great improvement over the SP250’s minimalist springs and stays.  The car was even fitted with twin fuel tanks with a filler in each rear wing, as was common in large Jaguar saloon cars of the period.

As was customary Sir William had the car driven round to his home, Wappenbury Hall in Warwickshire, for further consideration and asked for a viability study to be completed.

The outcome of this was that it would not be an economic proposition as the SP250’s fibreglass body was very labour intensive and the car took 2½ times as many man-days to build as the Jaguar E-type.  This meant that even if the ‘SP250 Mark II’ version of the car sold, it would never be profitable and the project was shelved.

SP252 was consigned to a corner of the Browns Lane factory. 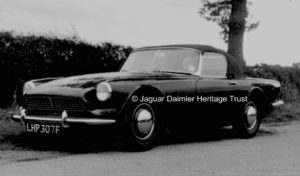 In 1967 the car was spotted in storage by Peter Ashworth, an entrepreneur in the entertainments industry and a regular Jaguar customer, who wanted it for his wife.  He managed to convince the then Jaguar MD, Lofty England, to sell him the car and it was registered LHP 307F in September 1967.

It appears that Mrs Ashworth (already an owner of a V8 saloon) wasn’t that impressed with its heavy steering and the SP252 found its way back to the factory where Duncan Saunders, at the time General Secretary, later patron, of the Daimler Lanchester Owners Club (DLOC), took it for a test drive in early 1968.  At the time the odometer showed just 619 miles and the offer price was around £700-£800.

Later that year, Tom Sweet purchased the car for £750 and kept it until 1994, selling it to Brian Peacock.  It was during the later part of Tom Sweet’s ownership that SP252 was ‘rediscovered’ and featured in a number of motoring magazines including DLOC’s own magazine Driving Member. 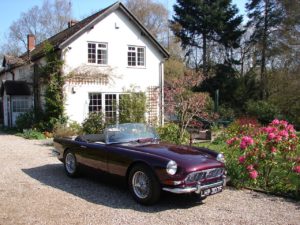 In 1994 Brian Peacock bought it and started a long term restoration, taking in all 8-9 years in its restoration -completing repairs to the chassis, the bodywork and overhauling the brakes and suspension.  He had the car re-painted, fitted a new windscreen and re-trimmed the interior and the hood.

As this car was a prototype many hours were spent in assessing its body construction as most parts other than the chassis are unique to the car – except for the dashboard which is very early E-type.  A later model wood-rim steering was fitted and remains on the car. 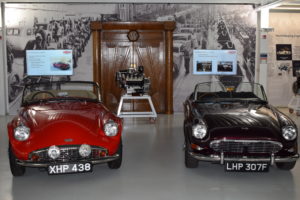 When SP252 left the factory it was without a proper grille, the one that it wears today was produced during the restoration programme and follows as closely as possible that seen in the 1968 period pictures where it is believed that the grille was ‘cardboard and silver paper’.  The traditional Daimler “flutes” were handcrafted by Brian Peacock as it was thought that a Daimler must have her ‘crinkles’

SP252 changed hands a couple more times before coming into the ownership of Matt and Claire Pilkington in early 2020 who kindly loaned the car to the Jaguar Daimler Heritage Trust for display, from March 2020 to the end of 2021.

© Text and Images – Jaguar Daimler Heritage Trust  – Except (where named)