This Swallow Model 8D Kenilworth sidecar was purchased by the Jaguar Daimler Heritage Trust in 2022. It is one of the 12 different models that were available from 1937 to the outbreak of World War Two in 1939 when civilian production ceased for the duration.

It is fitted to the Swallow Universal chassis, new for 1937, and while the body is still built around a wooden frame like the earlier sidecars, the metal panels are steel and not aluminium.  It has full weather protection with a hinged top (or head) covered in green Rexine (a precursor to vinyl or leathercloth) with celluloid windows.  This model was described as being:

‘of distinctive appearance which will make a direct appeal to the family man who is desirous of accommodating both passengers under cover.  The body is of generous proportions, and provides ample accommodation for an adult passenger in the front seat, and a child of normal proportions up to the age of eight in the rear seat.’ 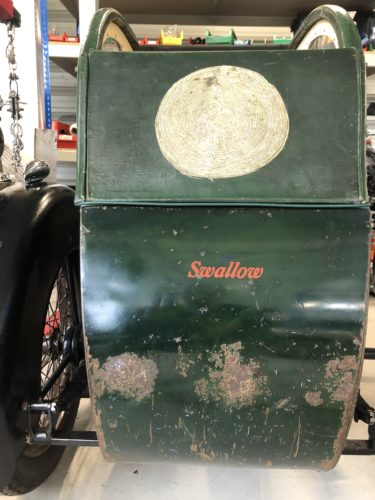 We know little of its history but it was unearthed during the mid 1960s at a property called Wickens Manor, Charing, Kent, fitted to a 1937 BSA M21 motorbike having been there since at least 1945.  Its pre 1945 history is not known but the white circle roughly painted on the rear panel, leads us to believe that it was used during World War Two as this would have made it visible under blackout conditions.

Thanks to friend of the Jaguar Daimler Heritage Trust, and Swallow guru, Gil Mond, we were alerted to this appearing on eBay, albeit no longer attached to the BSA.  This isn’t one of the iconic early Model 4 sidecars resplendent in polished aluminium but a much later one from 1937.  Not as handsome a looking product maybe, but a Swallow nonetheless and one that plugs a gap in JDHT’s Collection.

Having checked that the photos of the Kenilworth, on eBay, matched the brochure images in our archive, we bought it and sent a couple of our volunteers off to Wales, with our trailer, to collect our new acquisition.  The seller was pleased that the sidecar was coming to the Trust for preservation.

The Kenilworth is unusual in sidecar design as it was built to take two passengers.  Because of the side hinged head (the official name for the hood/roof), there is a small door to aid entry and although there are clasps visible on the outside of the head, there is also one on the inside so that it could be secured, and more importantly, released by the passenger from the inside.

Kenilworths were available in a choice of colours: Carnation Red, Black, Olive Green, Swallow Green, Maroon, Silver, Dark Blue or Ivory and deeply upholstered in best quality Rexine in Blue, Red, Green, Black or Brown. This sidecar is one of only 12 Kenilworths finished in green during the production run.

This is in good condition for its age, probably helped by a lack of use for an extended period of time.  The Swallow chassis is in excellent condition and needed only a basic clean.  The Chair itself has the usual wood frame and the steel panels are painted in dark green – which we believe to be the Swallow Green.  The hinged head is covered in green Rexine with the internal panels all cream coloured and the windows being made of flexible celluloid.  When it arrived, the front side windows were covered in very fine, light coloured, dust and there were tiny holes in some of the Rexine revealing evidence of woodworm.

We decided to conserve rather than restore, the whole sidecar.  On the body this meant just cleaning down the paintwork gently and removing the roughest of the surface rust.  The rust patterns help tell part of the story of its use, with rust streaks up the right hand side of the body caused by stones flicked up from the BSA’s front wheel.  Re-painting the body would have erased all of this history so after smoothing it down a little we just applied a good layer of polish.

The head needed much more work as the aforementioned woodworm was quite serious.  We carefully removed all the outer Rexine from the side panels and the frame.  Most of this was held in place by the original steel tacks although the front panel had been replaced at some time in its life and a new cover glued in place.  This was all carefully unpeeled. 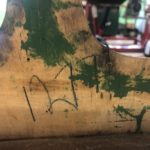 Body Number 1277 marked on Inside of Side Panel

While conserving the sidecar we found a stamped metal body tag tacked to the floor of the chair – bearing the number S1277 and 1277 was written on the head frame and both side panels proving that most of the head was still the original material.  Unlike Swallow (and later) cars where the chassis number is written in the ledger, complete with date of manufacture, the dates of sidecars were not recorded so can’t ascertain its exact build date from this number.

The right hand worm-eaten panel virtually disintegrated but this was pieced together, laid out and used as a pattern and a new panel was cut from appropriate thickness plywood.  Not knowing how long ago the woodworm had been active, the whole frame and the side panels, including the new one, received a couple of coats of woodworm treatment and wood hardener.  Having remade the right hand side panel we made sure that the original Rexine still fitted, all of which was lightly cleaned with soap and water on both sides to remove its lifetime of accumulated dirt and all the woodworm dust.  With all the dirt and woodworm dust removed we were faced with two problems. There were a number of tears in the material and some places where small sections were either missing or came adrift during the dismantling process.  The larger sections were riddled with holes from the woodworm.

We repaired the tears in the Rexine using Japanese Tissue and flexible adhesive and for the worst sections where added strength was needed, we sourced some dark green ‘leathercloth’, from vehicle trim suppliers Woolies, to as close a colour match as possible and this was cut into small strips to re-inforce where necessary.  The extent of the woodworm holes in the Rexine was such that when re-fixed to the side panels the light colour of the wood was visible through the holes.  Although we could have mixed up some paint to an exact colour match of the Rexine, we decided against this as the wood hadn’t been painted when the sidecar was built.  Instead we cut the dark green leathercloth to the shape of the side panels and stapled this direct to the panel, to act as a backing, and then re-fitted the original Rexine.  The woodworm holes are still visible but the wood can no longer be seen.

The seats and internal Rexine panels only required some minor rectification work to fix signs of moderate use.

The roll top section of the head was made in a ‘duck’ type of mohair material which both shows signs of wear and over the years had shrunk so that the poppers no longer lined up with the sockets fitted to the frame.  We could have made up a new roll top from modern mohair and positioned the fittings so that they would have lined up properly making the head weathertight, but as we don’t intend to use this sidecar outside in bad weather we took the decision to display it with the top rolled up and strapped in place.  This allows us to keep the original top material while allowing visitors to view the interior without having to raise the hinged head.

To identify the extent of the conservation work the new panel was marked up as 1277/2022 and labels were affixed to the rear of the outer panels, which are covered by the inner panels, stating what work was done, when, and recording the names of the Trust volunteers who completed the work: Chris Bennett, Geoff Smith and Simeon Woolley. 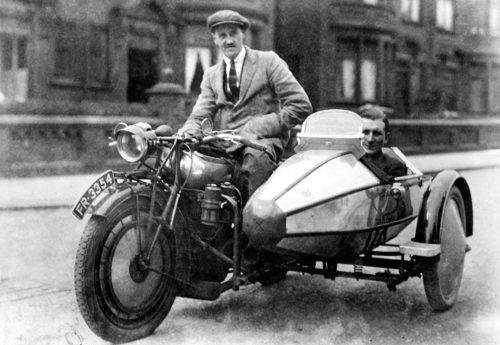 The original Swallow Sidecar was designed by William Walmsley, a thirty-year old World War One veteran and motorcyclist, who built his first sidecars in his parents’ garage at their home in Stockport.  When his father retired and the family moved to Blackpool in 1921, he continued this business at their new home.

One of his first customers in Blackpool was his new neighbour William Lyons who saw the business potential and convinced Walmsley to go into partnership – forming the Swallow Sidecar Company in 1922.

Swallow continued to build and sell sidecars even after they started making Swallow bodied cars in 1927, moved down to Coventry in 1928 and morphed into SS Cars Ltd.

Following the flotation of SS Cars, Swallow Sidecar Co (1935) Ltd was formed as a wholly owned subsidiary, under the management of Howard Davies with William Lyons designing the sidecars.

The Company continued making an average of over 100 sidecars a month although this was subject to seasonal fluctuations.  As late as 1937 the model range increased from the 11 of 1935-36 to 12, including the newly launched Kenilworth, plus a new ‘universal Swallow chassis’, with car type springing. 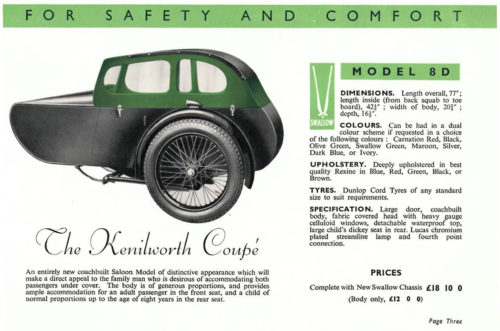 The Kenilworth was offered from 1937 to 1939 when war intervened.  Even 15 years on, its price was almost £10 less than Walmsley’s original Swallow Sidecar in 1922. 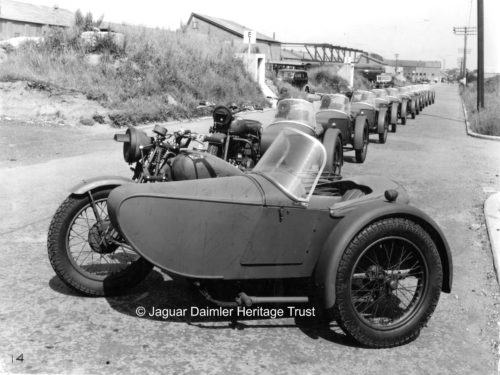 The Kenilworth bears some similarities to the passenger military sidecars that the Company produced for the War Department from 1939 to 1945.

As one of the companies still manufacturing sidecars, they received a tender from the Ministry for sidecars for the military and secured a contract which resulted in an order for 10,000 sidecars of varying configurations:

Building and selling civilian sidecars was not part of Lyons’ post-war strategy for his Company and he started negotiations with Eric Sanders of Stratford upon Avon based company Helliwell Group, in October 1944.  Due to some legal and financial wrangling it took about 14 months to conclude the deal which went through in December 1945, severing the last link to both William Lyons and the original Swallow Sidecar.

For the Trust, this acquisition brings our sidecars closely into line with our ‘First and Last’ policy, as we now have both models of both very early and very late sidecars to tell the Swallow Sidecars story.