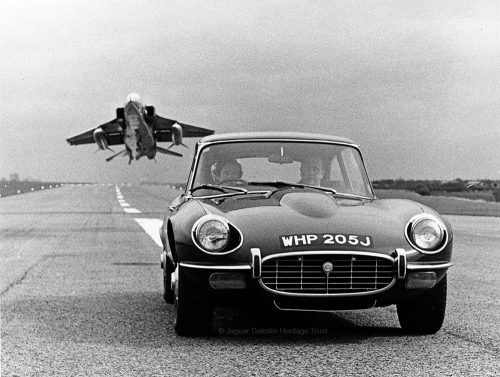 WHP 205J was one of the earliest E-type V12 cars, built in August 1970, the tenth right-hand drive 2+2 coupé by its chassis number, and the Regency Red car was originally part of Jaguar’s press fleet.  It had its moment of fame when it was used with a Jaguar jet fighter aircraft to create some dramatic photos!  It has been retained as part of the Jaguar Daimler Heritage Trust collection ever since.

The Jaguar V12 engine had been designed already during the early 1960s, by a team of engineers including Walter Hassan, Claude Bailey and later Harry Mundy.  In its original form, the engine had twin overhead camshafts per bank, and was intended for the XJ13, the stillborn Le Mans challenger with which Jaguar contemplated a return to racing.  While the XJ13 was shelved, Jaguar continued the development of the V12 engine for production cars.

The original 5 litre racing V12 with fuel injection had developed no less than 502 bhp.  It was decided to simplify the production engine, by using only a single overhead camshaft per bank.  Despite this, in its final 1970 production form the 5.3 litre V12 fitted with four Zenith-Stromberg carburettors still developed 272 bhp.  Although Sir William Lyons was insistent that he wanted the new V12 for the XJ saloon, in a parallel to 1948 launch of the XK120 it was decided to fit the new engine in a sports car first, and only afterwards in the saloon.  The XJ12 saloon was launched in 1972.

Meanwhile, the E-type became the first car to receive the new engine.  The Series 3 was launched on 29 March 1971, and had an immediate impact.  The top speed as measured in an independent road test was 146 mph (235 km/h; less for US specification cars), and was effectively on a par with the original Series 1 E-type, despite the Series 3 being the bigger and heavier car.

The longer wheelbase, first introduced on the 2+2 coupé in 1965, was now also found on the open two-seater.  An automatic gearbox was now an option on the open car, as well as on the coupé.

Early in 2020 the Jaguar driver, Tony Bell, from the Jaguar fighter photoshoot came in to see us at the Collection Centre and told us about his day out filming.  He was an apprentice at the time and was just told to take the car to an airfield for a photocall and follow the instructions.  After various passes and photographs Tony  asked the pilot how close he could get to the roof of the car. “How thick is the paint?” came the reply! 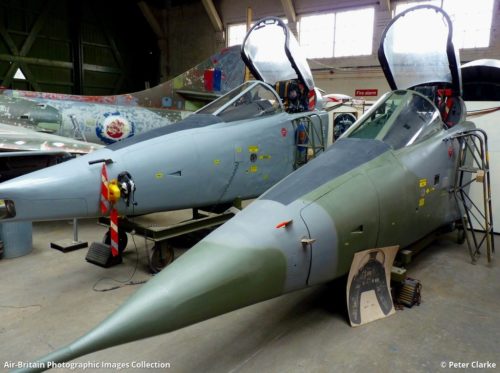 Jaguar aircraft were built by SEPECAT (Société Européenne de Production de l’avion Ecole de Combat et d’Appui Tactique) a joint venture company between Britain’s BAC (British Aircraft Corporation) and France’s Bréguet division of Dassault, formed in 1966.  The requirement was for a supersonic aircraft that could be used as a combat trainer, reconnaissance and later for ground attack.  Following an extended development period the company eventually delivered 543 aircraft to the RAF, the French Air Force and the air forces of Ecuador, India, Oman and Nigeria.

The aircraft in the picture is also very special.  This was the first British prototype, serial number XW560 which had its maiden flight on 12th October 1969 during which it went supersonic.  So this is one of the very first Series 3 Jaguar E-types and the very first British Jaguar aircraft.  Sadly the aircraft no longer exists having been scrapped in 1972 after an engine fire although part of it was used for ground instruction duties at Lossiemouth and BAe Warton until 1977.  All that remains of it is the nose cone and cockpit which now lives in the Boscombe Down Aviation Collection at Old Sarum aerodrome near Salisbury.