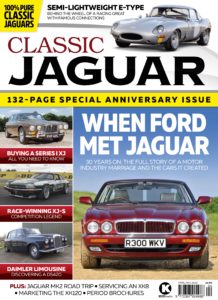 This Carnival Red XJ6 3.2 litre Sport was the very last car to be produced by Jaguar Cars with the in-line AJ16 six cylinder engine, which was then replaced by the new AJ8 V8 engine in the revised X300 XJ8.  This car was therefore also the last Jaguar- for the time being to carry the famous XJ6 name, first introduced in 1968.  It was built on 2 July 1997, and was immediately transferred to the Jaguar Daimler Heritage Trust’s collection for preservation.

R300 WKV was featured in the April/May 2020 Edition of Classic Jaguar magazine.

The new series Jaguar XJ6 (X300) saloons were introduced in September of 1994 to replace the existing models of the same name (code name XJ40).  These new models represented the first new cars to be produced since the Ford take-over in 1989.  They incorporated significantly improved build technology and a degree of ‘retrolutionary’ styling taken from earlier Jaguar models.  The six-cylinder engine was the new AJ16, a much-modified version of the AJ6 engine used in the previous generation of Jaguars.  There was also a limited production twelve-cylinder model.

The Jaguar XJ6.model range originally included 3.2 litre and 4.0 litre versions, both of which were available as a ‘basic’ model, a more luxurious Sovereign version, and a Sport version. There was also a high performance XJR version featuring a supercharged version of the 4 litre engine.  Unique to the North American market was the Vanden Plas model, while in the UK and some export markets a 4-litre Daimler Six was available.  Long wheelbase versions of many models followed in 1995.

R300 WKV was one of the cars featured in the video montage – Jaguar XJ50 – which Jaguar Cars produced
to celebrate 50 years of the XJ in 2018, showing the evolution of the XJ Saloon.