Reproduced with permission of Classic Jaguar magazine (April – May 2020)

CARS FROM THE COLLECTION – PART FOUR The X300 marked a turning point for the XJ saloon, with its traditional styling cues winning it many friends.  We take a look at the model’s successes and get behind the wheel of the very last example.

With Ford in control at Jaguar from 1990, it was inevitable that the American giant would look to expand the model range of its newly-acquired British marque.  Given the enormous sums involved in the purchase of Jaguar, it was essential for the company to see an increase in global sales; some of this could be achieved through product improvement as well as a focus on build quality and reliability, but additional models would obviously be required in order to gain extra market share.

What was essentially a two-car Jaguar line-up in 1990 would grow to see four separate models on offer by early the following decade, thanks to the debut of the S-Type in 1998 and the more compact X-Type three years later.  Ford knew, however, that the models it had inherited via its Jaguar purchase would need replacing before then; the XJS dated back to the mid-1970s, while the XJ40-generation XK had been on sale since 1986.  In the world of luxury saloons, that meant the current Jaguar saloon was more than halfway through a typical life cycle, and so the question of its replacement was up for early discussion.

What happened next showed a touch of genius by Jaguar’s new decision-makers, who realized that the XJ40 was still a fine machine in so many ways – and was therefore an excellent basis for a major revamp.  With altered styling more in tune with Jaguar’s heritage, an XJ40-based newcomer could be brought to market cost-effectively, giving the marque’s image a boost in the process.  The end result was, of course, the new X300 generation of 1994, the car that saw Jaguar’s legendary XJ saloon range returning to more than traditional aesthetics. 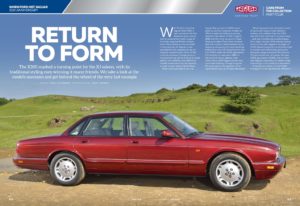 It was all very clever, for the X300 managed to look significantly different from its predecessor, despite sharing the same platform.  Indeed, the X300 was essentially a re-skinned version of the eight-year-old XJ40, featuring a traditional bonnet line that followed the shape of the quad headlamps and was therefore reminiscent of the old Series III XJ range.  Combine that with a subtly more curvaceous overall look (as well as integrated body-coloured bumpers) and you had an XJ that managed to look both fresh and authentically Jaguar at the same time.

It wasn’t just in terms of style that improvements were made, or course, as Jaguar was keen to ensure class-competitive build quality and reliability for the company’s first new model under Ford ownership.  A major investment was made in new manufacturing techniques, with the latest in body-welding robots helping to ensure impressive panel fit and precision compared with previous-generation XJs.

The X300’s adoption of Jaguar’s latest AJ16 six-cylinder engine helped to reinforce the newcomer’s image, with this development of the XJ40’s AJ6 unit being smoother, more refined and – as we were to find out later – more reliable than ever.  The X300 may have looked like a traditional Jaguar, but in every other respect it was a drastic improvement on what had gone before, giving buyers a genuinely capable alternative to the German competition of the time. 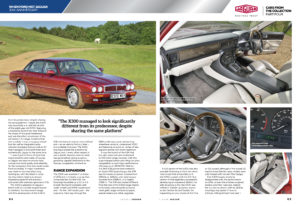 The X300 was available in a choice of different trim levels, a range that comprised the 3.2 litre XJ6, the Sovereign (available as a 3.2 or 4.0 model), the Sport (complete with wider wheels and stiffer suspension) and – for the 1997 model year – the Executive.  Part-way through the 1995 model year came various long-wheelbase versions, codenamed X330 and featuring an extra six inches of rear legroom and an inch more headroom.

It was the launch of the XJR that brought some welcome excitement to the X300 range, however, with this supercharged saloon providing cut-price competition to such high-performance offerings as the BMW M5.  With its 4.0-litre AJ16 powerplant mated to an Eaton supercharger, the XJR saw its maximum power increase from 249 bhp to 326 bhp, with a peak torque boosted from 289 lb.ft. to a mighty 378 lb.ft.  The XJR also looked different from the rest of the X300 range thanks to its body-coloured grille surround, mesh grille, larger exhaust tail pipes, special wheels and other upgrades.

A V12 version of the X300 was also available (following on from the short-lived model that arrived late on in the XJ40’s career), with the 6.0-litre version of that legendary powerplant developing an impressive 318 bhp.  As with all previous XJs, the X300 was offered in Daimler guise too, known as the Daimler Six and Double-Six (depending on your choice of 4.0-litre or V12 power), although in the crucial US market these Daimler-spec models were sold instead with Vanden Plas badges.

Few X300 buyers would be disappointed with the performance on offer, as even the smallest-engined models were fine road cars.  Indeed, the 3.2 was no slouch, with its 219 bhp ensuring a top speed of around 139 mph, hitting 60 mph from rest in less than nine seconds.  Regular 4.0-litre (249 bhp) versions were obviously quicker (144 mph, with 0-60 in 7.8 seconds), while the XJR was the fasted of all thanks to its artificially limited top speed of 155 mph and 0-60 mph time of just 5.9 seconds.

Such an extensive range meant there was a new-generation XJ to suit most potential buyers, aided by some very keen pricing in the car’s home market.  In 1996, for example, the X300’s final full year on sale, the range started at just shy of £30,000 – a sum that would have bought you an entry-level XJ6.  The XJR topped the Jaguar-badged model range at £47,479 (just £200 more than the long-wheelbase version of the 4.0 Sovereign), while the Daimlers ranged from £52,279 for the regular Six to £66,479 for the long-wheelbase Double-Six.

END OF THE LINE 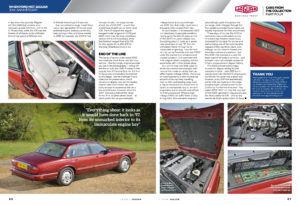 The series of saloon codenamed X300 was relatively short-lived, with the very last car – the stunningly original example you see in the photographs – rolling off the line on July 2nd, 1997.  Finished in the popular hue of Carnival red, the 3.2 litre XJ Sport was immediately transferred to the Jaguar Daimler Heritage Trust’s collection for preservation, and it remains on display now at the Gaydon-based Collections Centre.  We were lucky enough to experience the cars a few months back, however, when the JDHT allowed us behind the wheel for the fine-weather photo shoot – at which point, this unique example’s mileage stood at an astonishingly low 1039.  Yes, that really is just over a thousand miles, covered from new.

As you’d expect, this treasured X300 is in absolutely impeccable condition, having spent the last 23 years as one of the JDHT’s museum display cars.  Everything about it looks as it would have done back in July ’97, from its unmarked interior through to its immaculate engine bay.  Even the tool kit that can be found (as with any X300) under the bonnet is in unmarked and unused condition, with each item still in its original plastic wrapping and the spare bulbs still in their proper place.

Out on the road, this little-used XJ drives like a brand new example, with none of the creaks or rattles that can affect higher-mileage X300s.  The whole on-road experience is akin to jumping aboard a time machine, travelling back to 1997 and heading away from a Jaguar showroom in a brand new XJ Sport, so impressively taut is the car’s suspension and so smooth and refined its AJ16 powerplant.  Where a high-mileage X300 can suffer from a noisy timing chain, this example’s engine is astonishingly quiet throughout the rev range, while changes through the four-speed automatic transmission are equally impressive for their smoothness.

These days, of course, X300 is revered by many enthusiasts as one of today’s top modern-classic buys, renowned for its value for money as well as being one of the most durable Jaguars of the last thirty years.  Low-mileage cars do come to market and inevitably command a premium, but this 1039 mile example is surely the least-used of all today’s survivors – and being the very last example produced, it has a unique place in Jaguar history.

The X300 proved to be a major success for Jaguar, selling 92,038 examples in total – with 1996 alone seeing more than 36,000 finding buyers worldwide.  Its career was a short one, however, as by 1997 the aesthetically similar XJ8 was waiting in the wings, bringing eight-cylinder power to the XJ line-up for the first time ever.  That makes R300 WKV not only the very last of the X300-generation Jaguars but also the final traditional XJ6 – and by any standards, that’s quite a claim to fame.