The XK180 was revealed to the public at the Paris Motor Show in October 1998, after an incredibly short gestation period of only ten months.  The event happily coincided with the fiftieth anniversary of the XK120, the first of the classic generation of XK sports cars, which were the inspiration for the XK180 concept.  The car was created in Jaguar’s Special Vehicle Operations (SVO) workshop.

The XK180 was unveiled by Nick Scheele, Chairman and MD of Jaguar and in the video clip below he is interviewed at the launch, by Ken Gibson, Motoring Editor of The Sun.

Unlike many other motor show concept cars, the XK180 was a fully operational vehicle.  It was based on a shortened XKR platform, and featured the supercharged 4-litre V8 engine developing 450 bhp, together with a 5-speed automatic gearbox with both automatic and manual options.  Unlike other Jaguars of the period that have  the J-gate manual gear selector, the steering-wheel has push buttons for sequential gear changes, left button to change up and right to change down.  The floor-pan was shortened by 5 inches (13 cm) in the wheelbase and about 8 inches (20 cm) trimmed off the front and rear overhangs.  The all-aluminium body was made by Abbey Panels, a long-standing Jaguar supplier which had made the C- and D-type bodies in the 1950s, as well as the XJ13 and the XJ220.  In fact, two XK180 cars were built, the other a left-hand drive car, which is based in the USA.

Jaguar loaned the car to the BBC and Jeremy Clarkson road tested it for the BBC Top Gear Magazine which was published in April 1999.

It was also reviewed on the BBC Top Gear TV programme, this time driven by Tiff Needell, who seems to have ignored the instruction to ‘be gentle’ (see below). 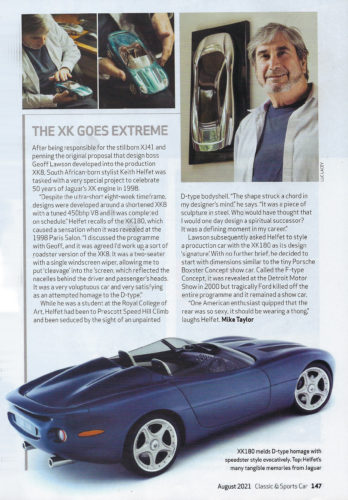 The body styling was developed under the direction of Keith Helfet, the senior Jaguar designer whose previous work included the XJ220.  Helfet designed the XK180 to be a modern interpretation of the classic Jaguar themes seen in the Le Mans winning D-type of the 1950s, and the E-type of the 1960s.

However, the XK180 was at the same time a completely modern design, intended as a showcase of Jaguar technology for the new millennium, showing the direction for sporting variants of Jaguar products.

The XK180 was given an enthusiastic reception, as it was seen as an indication that Jaguar might at a future date bring back a compact sports car, as a latter-day successor to the classic XK and E-type models.