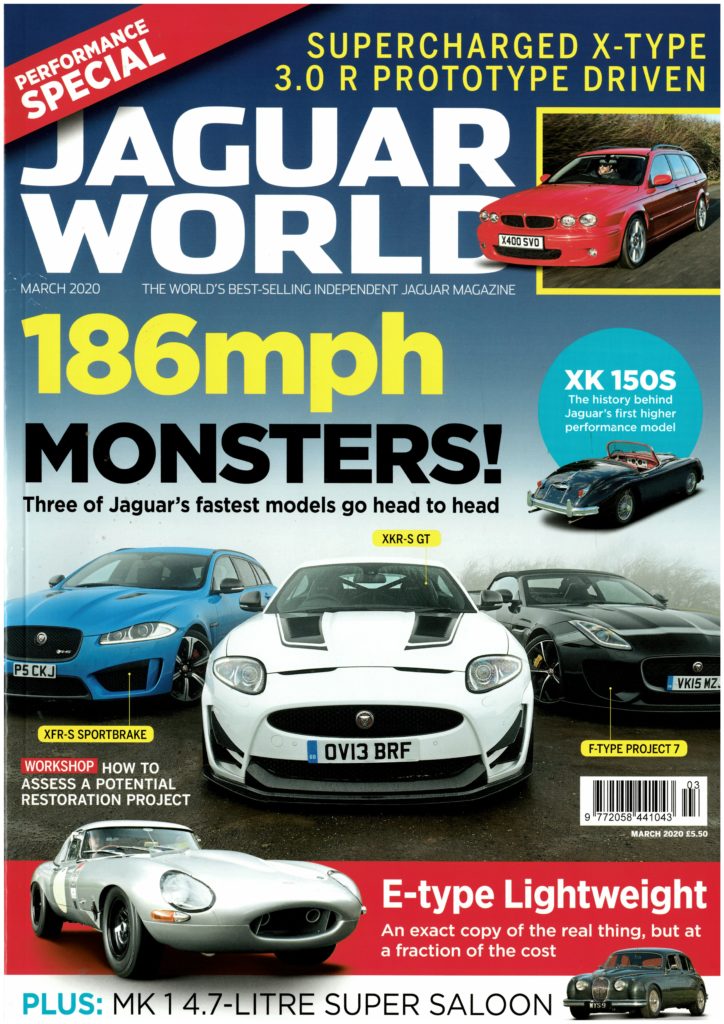 A supercharged X-TYPE R 3.0 came close to production.  Very close.  But, in the end, the jury was out on whether or not it could be made to work.  We pass final judgement by driving a rare prototype.

IF ONLY…. We’ve all said it, and we’ve all thought it about decisions that we made or didn’t make at some point in our lives.  Here, at Jaguar World, we’ve also thought it about many of the cars that very nearly made it into production, but didn’t.  Few came closer than this, what would have been the X-TYPE R.

Back in 2002, when the concept first came to the drawing board, the compact executive market was a real sweet spot for the car industry as a whole.  The combination of traditional executive car buyers downsizing along with aspirational fleet user-choosers finding themselves in a position where they could swap their Vectra or Mondeo for something with ‘a badge,’ made the compact executive market one of the most competitive sectors of the new marketplace.  There was demand across the entire spectrum, from four-cylinder diesels to screaming six-cylinder performance models.

For Jaguar’s German rivals, the entire era was a licence to print money.  It was great news for BMW and Mercedes-Benz and practically the making of Audi, which has never looked back.  And, with Ford at the helm, Jaguar wanted a bigger slice of what was clearly a lucrative pie.

There’s no argument that the 2001 X-Type (internally known in Jaguar as the X400) was perfectly timed.  It hit the market right at a time when compact execs were really taking off and the BMW 3-Series had put a stake in the ground as a regular in the UK’s top-ten seller charts.  But, while it enjoyed a honeymoon period during which it offered the prestige and allure of the Jaguar brand to a group of buyers to whom it was previously inaccessible, the V6-only engine line-up and resultant high benefit-in-kind taxation meant that Jaguar had to move fast to remain on fleet buyers’ procurement lists. 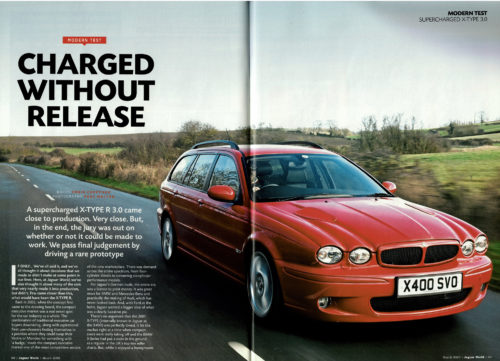 The answer, of course, was to fit the X-TYPE with a diesel engine – the first oil-burning Jaguar – based on a model that had already upset the purists by sharing much of its architecture with the Ford Mondeo.

While Jaguar’s engineering team were busying themselves with getting the fleet-friendly X-TYPE ready for market, the company’s Special Vehicle Operations department (SVO) based at Browns Lane was busy creating the yin to that car’s yang: the X-TYPE R.  It was destined to be the smallest model in Jaguar’s supercharged R line-up and a credible rival to the BMW M3, Audi S4 and Mercedes C32 AMG.

There were hints that something sporty was coming, a ‘Jaguar Racing’ X-TYPE concept car at the 2002 Detroit Auto Show being one.  Meanwhile, the media speculated about the future.  In 2003, Autocar magazine reported that an undisclosed source at Jaguar had ‘confirmed’ the car for production, but for years neither the source, nor the car itself became apparent.  Even in recent years, sources within Jaguar have remained cagey about the X-TYPE R, but, at long last, the truth is starting to come out, not least because the Jaguar Daimler Heritage Trust has just put one of the R development prototypes back on the road for the first time since development stopped in 2006.

X400 SVO is one of two R prototypes known to survive.  The other – a silver saloon – is in Australia, where it somehow found its way into private ownership, presumably having been left there by SVO’s engineers after hot-weather testing.

Almost 18 years since development of the R began, Jaguar World has become the first magazine in the world to take to the road in the Jaguar that never was.  But, was the X400R a missed opportunity, or were the SVO engineers right to draw a line in the sand during the development process?

Alas, despite approaching several current and former Jaguar employees to talk to them about the car, we’re none the wiser as to the truth behind its demise.  One suggestion is that the JATCO automatic gearbox wasn’t strong enough for the 360 bhp the supercharged V6 was believed to produce.  But, that doesn’t explain the lack of a manual production model that would surely have still appealed to enthusiastic buyers.  It’s rumoured, too, that it had its detractors inside Jaguar, as it was both faster and more advanced than the S-TYPE R and XJR models that it was supposed to sit beneath.

Another suggestion – more plausible – is that the body engineering required would be too expensive.  To fit 19 in wheels would have required new front inner and outer wings (the development car wears 18s), while additional stiffness would need to have been built into the engine bay to cope with the extra power.  The bulkhead was from the Mondeo, for example, and was never planned to have the X-TYPE 3.0’s 231 bhp, let alone anything meatier.

The third school of thought is that while the X400R was definitely possible, making money out of it wasn’t.  It may have been able to command a price tag north of £50,000, but the cost of developing it would be too great to justify.  In a car industry that was becoming increasingly reliant on shared architecture and economies of scale – a precursor to the way the entire automotive sector operates today – the X400 architecture was too long-in-the-tooth to justify it.  By the mid-2000s, its shelf life was limited as parent company Ford moved over to more and more modular platforms.. To return the investment cost would have required either a steep purchase price or a large volume of sales; arguably, both. 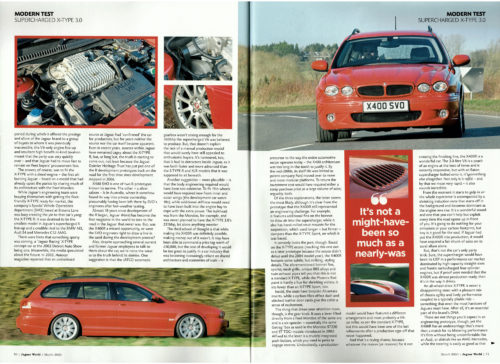 Of the three applications, the latter seems the most likely, although it’s clear from the prototype that the X400R still represented an engineering challenge.  For example, it features additional fins on the bonnet to draw air into the supercharger, while it also has hand-milled strut mounts for the suspension, which used longer – but firmer – dampers than the X-TYPE Sport, on which it was based.

It certainly looks the part, though.  Based on the X-TYPE estate (marking this one out as a later prototype because the estate didn’t debut until the 2004 model year), the X400R features some subtle, but striking, styling details.  The aforementioned bonnet fins, spoiler, mesh grille, unique BBS alloys and twin exhaust pipes tell you that this is not a standard X-TYPE, while the Phoenix Red paint is hardly a hue for shrinking violets.  It sits lower than an X-TYPE Sport, too.

Inside the seats have bespoke Alcantara insets, while a carbon-fibre effect dash and stitched leather door cards give the cabin a sense of excitement.

The thing that draws your your attention most, though is the gear knob.  It uses a lever lifted directly from a Ford Mondeo of the same era and is a six-speeder – essentially the same Getrag ‘box as used in the Mondeo ST220 and ST TDCi models introduced in 2002.  Affixed to the lever is a crudely integrated push button, which you need to press to engage reverse.  Undoubtedly, a production model would have featured a different arrangement and most probably a lift-up collar, as per the standard X-TYPE, but this would have been one of the last refinements after a production sign-off that never happened.

And that’s a crying shame, because whatever the reason (or reasons) for it not crossing the finishing line, the X400 R is a wonderful car.  The 3.0 litre V6 is a peach of an engine at the best of times and is instantly responsive, but with an Eaton supercharger bolted onto it, it’s something else altogether.  Not only is it rapid – and by that we mean very rapid – it also sounds incredible.

From the moment it starts to gulp in air the whole experience is accompanied by a shrieking induction note that  starts off in the background and becomes dominant as the engine revs rise.  It’s a wonderful sound and one that you can’t help but exploit every time the road opens up in  front of you.  It’s going to do nothing for your emissions or your carbon footprint, but boy is it good for the soul.  If Jaguar had put the X400R into production, it would have acquired a fair chunk of sales on its aural allure alone.

But, that’s not the car’s only party trick.  Sure, the supercharger would have been its USP in a performance car market dominated by high-capacity straight-sixes and frantic turbocharged four-cylinder engines, but if proof were needed that the X400 R was almost production ready, then it’s in the way it drives.

An all-wheel-drive X-TYPE is never a disappointing steer, with a pleasant mix of chassis agility and lively performance coupled to a typically pliable ride – something that even the most hardcore of Jaguars must have.  After all, it’s an essential part of the brands’ DNA.

These are not things you’d expect in an engineering prototype, though, yet the X400R has an undercarriage that’s more than a match for its blistering performance.  It’s firm without being uncomfortable like an Audi, or skittish like an AMG Mercedes, while the steering is easily as good as that of a BMW M3.  It’s as if Jaguar took all the X400R’s rivals and combined their best elements while ironing out their worst.  The German cars may trump the Jaguar for fit and finish, but they don’t hold a candle to it for chassis excellence – and that’s not something we say lightly.  As a long-distance cruiser, or a point-and-squirt performance car, the X400R is a fabulous machine and one that we don’t doubt would have silenced a few critics.

In engineering terms, there’s absolutely nothing crude about this car, as you’d normally find in an engineering prototype, while the exterior finish is good enough to suggest it was pretty much ready to be exhibited at a motor show – or, at least, wheeled out for customer clinics – before Jaguar’s übermeisters decided that it would never be a production reality.  Sure, some of the invisible parts are a bit hand-finished, such as the adhesive around the cooling fins and the clearly hand-milled engine mounts and strut tops, but this is far, far more than a styling study.  It’s not a might-have-been so much as a nearly-was. 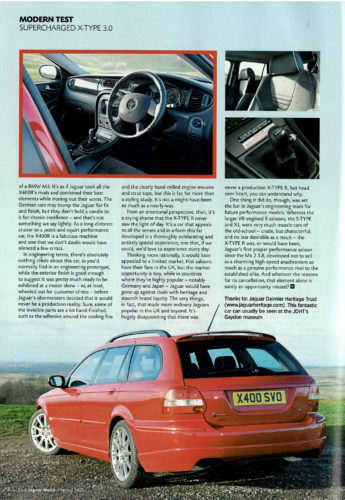 From an emotional perspective, then it’s a crying shame that the X-TYPE R never saw the light of day.  It’s a car that appeals to all the senses and in a  form this far developed is a thoroughly exhilarating and entirely special experience; one that, if we could, we’d love to experience every day.

Thinking more rationally, it would have appealed to a limited market.  Hot saloons have their fans in the UK, but the market opportunity is tiny, while in countries where they’re highly popular – notably Germany and Japan – Jaguar would have gone up against rivals with heritage and staunch brand loyalty.  The very things, in fact, that made ordinary Jaguars popular in the UK and beyond.  It’s hugely disappointing that there was never a production X-TYPE R, but head over heart, you can understand why.

One thing it did do, though, was set the bar in jaguar’s engineering teams for future performance models.  Whereas the the larger v8-engined R saloons, the S-TYPE and XJ, were very much muscle cars of the old-school – crude, but characterful, and no less desirable as a result – X-TYPE R was, or would have been, Jaguar’s first proper performance saloon since the Mk2 3.8, developed not to sell as a charming high-speed anachronism so much as a genuine performance rival to the established elite.  And whatever the reason for its cancellation, that element alone is surely an opportunity missed?

Thanks to: Jaguar Daimler Heritage Trust (www.jaguarheritage.com).  This fantastic car usually be seen at the JDHT’s Gaydon museum.