Even among D-types this is a unique car. It is the factory prototype for the machine which set the seal on the Jaguar Le Mans legend, culminating in a hat-trick of victories from 1955 to 1957.  With its advanced monocoque construction and beautiful low-drag body, it maximised the potential of the XK engine, offering over 170 mph while remaining tractable enough to be driven on the road.  Indeed the works cars were driven from Coventry to Dover, onto the ferry, and then down the main roads to the French circuit.

Although the C-type had decisively beaten Europe’s best at Le Mans in 1951 and 1953, the threat from Mercedes-Benz and Ferrari made it clear to Jaguar Team Manager “Lofty” England and engineer Bill Heynes that they needed a new car.  This was the result – stronger, lighter and faster than the C-type, yet powered by a 270 bhp development of the same XK engine.  This meant that private owners could easily buy and maintain these cars, which provided a useful back-up to the works team. 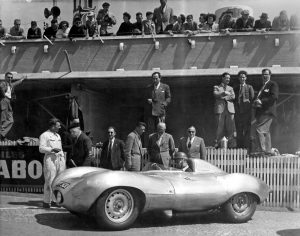 XKC401 being tested at Le Mans by Tony Rolt

This prototype was completed in May 1954, and immediately travelled to France for a Le Mans test session where Jaguar works driver Tony Rolt broke the lap record by five clear seconds.  On its return to Coventry, it was used for more development work, while a further three D-types were built for the race itself.

In the event fuel contamination sidelined two cars, but the third D-type, driven by Duncan Hamilton and Tony Rolt finished a close second, one lap behind the Ferrari 375 Plus of José Froilán González and Maurice Trintignant.

Victories at Reims and Sebring were a promising pointer for the following year, when Mike Hawthorn and Ivor Bueb won Le Mans – Jaguar’s third victory.

In 1956, two works cars crashed and one suffered engine failure, but the honours fell to another D-type of the private Ecurie Ecosse team.

In 1957, Ecurie Ecosse brought Jaguar’s total to five Le Mans wins, three of them for the D-type – a world beating sports-racing car, which you could buy from a Jaguar dealer and drive home.

Rock musician Brian Johnson of AC/DC runs a YouTube series called Cars That Rock and for one of the episodes of his second series he interviewed Jaguar test driver Norman Dewis about the history of the D-type and the Le Mans race having a look under the bonnet of OVC 501 –‘the noisy bit!’