The ALC, or Advanced Lightweight Coupé, was the third in a series of much-acclaimed concept cars to emerge from Jaguar’s Design Studio under the leadership of Design Director Ian Callum.  The two previous designs had been the R-coupé of 2001, and the R-D6 of 2003.  While each in its way pointed to a future design direction for Jaguar, as would soon become obvious, the ALC was the one closest to a production car, both in design, and in its timing.

Ian Callum and Design Manager Giles Taylor sought their inspiration in some of the famous Jaguars of the past, notably the E-type of 1961, with the shape of the radiator grille, the bonnet and the hatchback of the two-plus-two coupé echoing its famous forerunner.  However, the proportions, style and details of the ALC, with its 21-inch alloy wheels, complex headlamp shapes and aluminium gills on the front wings, were completely contemporary and suitable for a 21st century Jaguar.

The clean and uncluttered interior showed a similar approach, combining traditional stitched tan leather with modern aluminium inserts.  The functional layout of the instrument binnacle, the gear change paddles mounted on the steering wheel and the adjustable pedal box showed that this was first and foremost a driver’s car. In engineering terms.  The ALC featured an immensely rigid all-aluminium chassis as first seen on the new XJ saloon in 2002, and if fitted with Jaguar’s supercharged engine, was estimated to have a top speed capability of 180 mph.

The ALC was introduced to the media and the public at the Detroit Motor Show in January 2005, and was shown for the first time in Europe at the Geneva Motor Show in March.  A few months later, at the Frankfurt Motor Show in September, Jaguar unveiled the new XK.

Only then did it become clear that the ALC had, in fact, been a ‘teaser’ for the new production car, a gorgeous and dynamic sports car true to Jaguar’s tradition for making beautiful fast cars.

The Spring 2020 edition of Jaguar World published a summary of the launch of the ALC in Detroit. 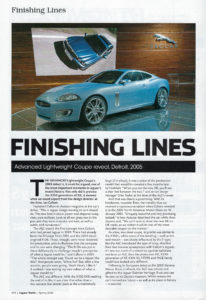 THE ADVANCED Lightweight Coupe’s 2005 debut is, it could be argued, one of the most important moments in Jaguar’s recent history.  Not only did it preview the X150 generation of XK, it showed what we could expect from the design director at the time, Ian Callum.

Explained Callum to Autocar magazine at the car’s debut, “This is Jaguar design moving on as it should do.  The new look is about power and elegance using clean, pure surfaces.  Look at all our great cars in the past and they were muscular and taut, as well as subtle and curvaceous.”

The ALC wasn’t the first concept from Callum, who had joined Jaguar in 1999.  There had already been the R-Coupe from 2001 and the 2003 diesel engined R-D6.  These, though were never destined for production, only to illustrate that the company and its cars were changing.  “The R-D6 was put in there deliberately to challenge people’s perception of what a Jaguar could be,” said Callum in 2005.  “The whole concept was, ‘Could we do a Jaguar like this?’  And people went ‘Whoa-ho!’  But, after a few months, people were going, ‘Yeah!  Hmm, I like it.’  It worked.  I was trusting my own values of what Jaguar should be.”

The ALC was different.  With the X100 XK8 reaching the end of its life, it was clear that other than a few concept-like details (such as the unrealistically large 21 in alloys), it was a taster of the production model that would be revealed a few months later in Frankfurt.  “When you see the new XK, you’ll see a clear link between the two,” said senior design manager Giles Taylor at the time of the ALC’s reveal.

And that was clearly a good thing.  With its handsome, muscular lines, the metallic blue car received a rapturous reception when Callum revealed it at the 2005 North American Motor Show on 10 January 2005.  “Uniquely beautiful and very promising indeed,” is how Autocar described the car, while Auto Express said, “We can’t wait to drive the new XK on UK roads, as we reckon it will be one of the most desirable coupes on the market.”

As a low, two-door coupe, its profile was similar to the X100’s, while some of the detailing – such as the oval mouth – was clearly influenced by the E-type; but the ALC introduced the type of crisp, chiselled lines that became synonymous with Callum’s Jaguars.  It’s not too much of a stretch to say that had there not been an ALC then the production XK, X250-generation of XF, X351 XJ, F-TYPE and PACE family could have looked very different.

Following its European debut at the 2005 Geneva Motor Show in March, the ALC was retired and gifted to the Jaguar Daimler Heritage Trust and can be seen at its Gaydon museum.  Which means the car’s immediate future – as well as its place in history – is assured.