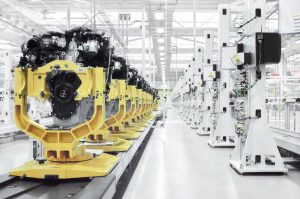 In September 2014, Jaguar Land Rover announced the Ingenium family, a range of modular engines produced in both petrol and diesel variants to power the new Jaguar XE and future models from Jaguar Land Rover.  Ingenium uses a modular architecture making it possible to be produced in 3, 4, 5, and 6 cylinder versions (built around individual 500 cc cylinders), and as hybrid variants, depending on demand and requirements.

From late 2015, Ingenium replaced the engines sourced from Ford’s engine plant in Bridgend in Wales.  The engine range is produced at the new £500 million, 100,000m2 Engine Manufacturing Centre at Wolverhampton in the West Midlands in the UK.

Ingenium’s design is configurable and flexible for longitudinal and lateral architectures and for front, rear, and all-wheel drive, together with auto and manual transmissions.    Depending on configuration, engines have either a single twin-scroll turbo-charger, or two twin-scroll turbo-chargers, with ceramic ball bearings.  Valve train design follows the traditional Jaguar approach of chain driven double overhead camshafts (DOHC).  Particular emphasis has been placed on achieving exceptionally low internal friction, which is described as being 17% less than its 2.2 litre diesel predecessor.   Computer-controlled variable oil and water pumps and a split circuit cooling system enable fast warm ups.  While a simplified cam drive system, crankshafts that are offset from the centre of the block, and electronically controlled piston cooling jets all help to improve efficiency in the oil pumping circuit.

Starting from a clean sheet, meant that Jaguar’s powertrain engineers could make the Ingenium engines as light and efficient as possible, and deliver the blend of power, torque and smoothness customers expect.  These state-of-the-art engines were proven over 2 million miles of real-world testing. 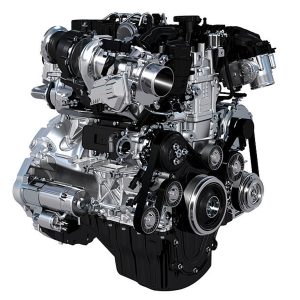 The new generation of Ingenium diesel engines are wholly designed and manufactured by Jaguar Land Rover.  No opportunity has been missed in ensuring their design is right on the cutting edge of technical advancement, making them the most efficient Jaguar diesel engines ever built.

The engine blocks are cast from aluminium alloy, with steel liners, producing stiff cylinder blocks with twin balancer shafts to ensure inherently low levels of vibration.  Details such as the acoustic sump cover, decoupled injectors, and 0.5 mm ovality on the injection pump drive sprocket contribute to the Ingenium’s exceptional quietness.  The cam and balancer shafts have roller bearings instead of machined-in bearing surfaces, helping to produce a very low friction engine. 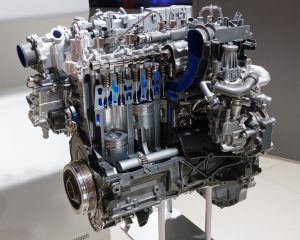 The AJ200D 2.0-litre Ingenium diesel was initially offered in two power outputs.  The first, rated at 163 PS / 380 Nm, delivers benchmark efficiency figures of 75 mpg and 99 g/km CO2 without any compromise to launch performance or mid-range acceleration.  The 180 PS / 430 Nm variant has one of the highest torque outputs in the class.  Further versions have since been launched offering 150 PS / 380 Nm and 240 PS / 500 Nm. 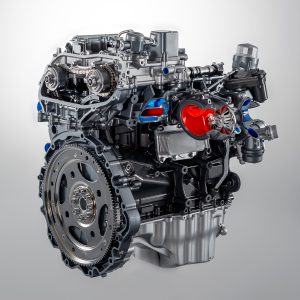 Petrol versions were launched in 2016, using the same architecture, initially in 2 versions based on direct injection 1,999 cc, four cylinder, turbo-charged configurations:  200 PS / 320 Nm and 250 PS / 365 Nm with a single turbo-charger. 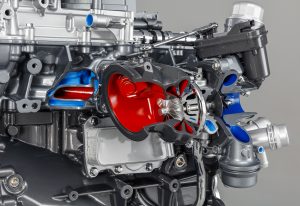 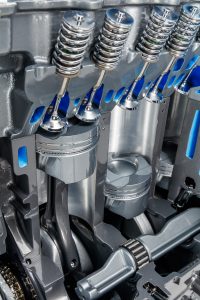 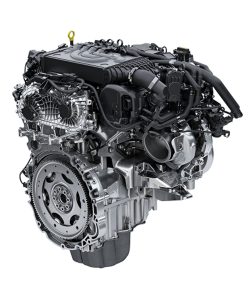 On Wednesday 13 February 2019, Jaguar Land Rover announced the launch of the new six-cylinder petrol version of the Ingenium engine, designed and engineered in-house, and manufactured at its £1 billion Engine Manufacturing Centre (EMC) in Wolverhampton, UK.

The 3.0-litre straight six cylinder petrol engine, which debuted on the Range Rover Sport, is available in 360 PS and 400 PS versions with a torque capable of up to 495 and 550 Nm, is more responsive and better balanced than the outgoing V6 petrol.

It features a unique combination of an electric supercharger to deliver immediate response supported by a twin scroll turbo-charger and Continuous Variable Valve Lift, which boosts power and helps the engine to breathe with maximum efficiency.

As of 15 February 2019 it has not yet been announced which Jaguar models the new engine will power, but we look forward to it and will update this web page as soon as we have any news.

On 17 July 2020, Jaguar Land Rover announced that it has built 1.5 million Ingenium engines at its Engine Manufacturing Centre at Wolverhampton.  The Engine Manufacturing Centre also houses the assembly of Electric Drive Units (EDUs), offering full flexibility between new petrol and diesel engines and EDUs for those customers who want to make the switch from conventional to electrified vehicles.

The Wolverhampton site is complemented by a growing electrification ecosystem in the Midlands, with the innovative and technologically advanced Battery Assembly Centre at nearby Hams Hall assembling PHEV and BEV batteries. Together, they will power the next generation of Jaguar and Land Rover electrified vehicles.

Ken Close, Jaguar Land Rover Powertrain Operations Launch Director, said: “We are experiencing unprecedented demand for cleaner-running vehicles, so it’s more important than ever to deliver clean and efficient engines without compromising on the performance or all-terrain capabilities our customers have come to expect.  Our Ingenium powertrains offer the very best of both worlds – better fuel efficiency and lower emissions, and even greater torque for a more responsive and engaging drive.”