There’s only one Jaguar XJ13 in the world and you’re looking at it!

Built as a potential Le Mans contender, it never competed in any race.  Its development, which started in 1964, inevitably had to take second place to that of the much more important new saloon car which became the XJ6, launched in 1968.  By the time XJ13 was completed, its design had become obsolete against new cars from Ferrari and Ford, never mind the Porsche 917.  For 1966 the Le Mans regulations were changed, and prototype cars were limited to engines of 3 litres.  To run cars with larger engines, manufacturers had to build fifty examples as production cars (later reduced to twenty-five) and the single XJ13 built had a 5 litre V12 engine – meaning it could not enter the race.

This did not stop XJ13 from being one of the most beautiful racing cars of all time, thanks in large part to the talent of aerodynamicist and designer Malcolm Sayer who had previously created the designs for the Jaguar C and D-type racing cars and the E-type production sports car.

Under the direction of Claude Bailey, with design by Bill Heynes, Wally Hassan, and Derek White on the chassis, its unique 502 BHP, 5 litre, V12 engine was situated mid car to achieve optimal weight distribution.  The engine was mounted just behind the driver and suspended from the monocoque and carried some of the rear suspension loads. The time taken to develop the new positioning may have slowed work down and given the advantage to its competitors.  The 5 litre, V12 is quite different to the later production model which came out in 1970 in the Series 3 E-type.  It had 4 overhead camshafts with 2 valves per cylinder.  Both gear and chain-driven camshaft configurations were tried on the test engines.  Initially the V12 engine was equipped with 3 carburettors per head but these were replaced with a Lucas mechanical fuel injected system which is still fitted.

Both the cylinder head and engine block were aluminium and, being mid-mounted, a 5 speed ZF transaxle gearbox was installed. 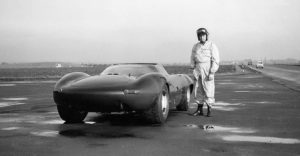 During early testing in 1967, it lapped the MIRA test track at over 161 mph (259 km/h), establishing a lap record in the hands of racing driver David Hobbs, despite the car still being in the development stages.  As there was no prospect of XJ13 being raced it was mothballed and consigned to a corner of the factory.  It was calculated that the car would have been able to have exceeded 180 mph (289 km/h) down the Mulsanne straight at Le Mans.

Many of the lessons learned in the development of the racing engine were used in Jaguar’s production V12 engine which would be produced for twenty-five years from 1971 to 1996.  In 1971, having spent four years sitting under a cover in the factory, it was taken out of mothballs and returned to MIRA to be filmed for the E-type V12 launch.  With Jaguar test driver Norman Dewis at the wheel, on the final lap after filming, a tyre punctured on the banking sending the car into the retaining fence from where it rebounded, to flip end over end twice, before rolling twice and coming to rest on its wheels.  Dewis had the presence of mind to duck down under the scuttle, turn off the engine, and miraculously escaped with just minor bruises, returning to work the following day. 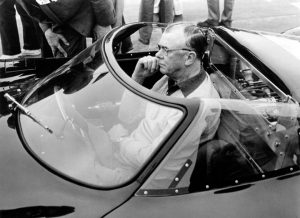 1973 Lofty England in XJ13
at Silverstone

Although badly damaged, the design of its very strong but light structure, that could withstand such an impact, must be given great credit.  It was loaded onto a trailer and taken back to Browns Lane where it was left in its crashed state until 1972 when Lofty England, by now Chairman of Jaguar, decided it should be restored.

Fortunately, Abbey Panels had kept the original jigs and formers and were given the job of re-building the car.  Happily BL seemed to have sanctioned this although the car was of no real use to the Company and it was shown at the British Grand Prix meeting at Silverstone in July 1973 with Lofty at the wheel.

In 2005 it was moved from Browns Lane to Whitley and totally restored even back to its correct 1968 colour in time to visit Le Mans in 2006, finally to take to the track it was destined for some 40 years previously.  As Norman Dewis said when he saw the renovated car at Browns Lane, “She is lovely, there is nothing like the XJ13, it is very special to me”.

Jaguar Daimler Heritage Trust still runs XJ13 today, although not being road legal its use is somewhat restricted.  In May 2017 it was driven on closed roads in Windsor and in July 2018 was driven on the street circuit at Coventry Motofest.  In November 2019 it was displayed on a rotating turntable on the Jaguar Enthusiasts’ Club (JEC) Stand at the Classic Motor Show at the NEC.

We could not allow Swallow’s Centenary year of 2022 to pass without using the Trust’s most famous and most valuable car.  As Coventry Motofest was not staged, we completed demonstration runs at the British Motor Museum on Saturday 3 September and on the evening of Tuesday 13 September.  We also started it up on Saturday 10 and Sunday 11 at the joint JDHT / JEC Centenary weekend on the promenade in Blackpool, in front of the famous Tower.  True to form whenever it is fired up, or run – even at non racing speeds, it certainly draws a crowd.