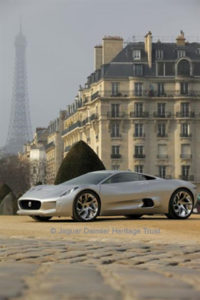 Created to celebrate 75 years of Jaguar, Project C-X75 is the ultimate expression of the brand’s design and engineering innovation.  The C-X75 was revealed as a concept at the 2010 Paris Motor Show, where it received AutoWeek’s coveted “Best in Show” award and the 2010 Louis Vuitton Classic Concept award. 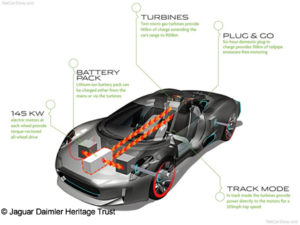 C-X75 is a range extended hybrid with a 19 kWh lithium-ion battery pack powering four 195-hp electric motors – one for each wheel.  The batteries are re-charged by two 70 kW micro turbines made by Bladon Jets which provide additional power to the electric motors when needed. 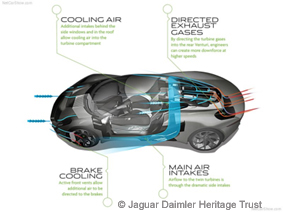 Active aerodynamics allow for a simple fuselage section that remains stable at very high speeds.  The hybrid technology results in CO2 emissions of just 28 g/km on the EU test cycle.

The twin seats are fixed and the steering wheel, controls, main binnacle and pedal box all adjust towards the driver.  The seats are attached to the bulkhead as in a single-seater racing car, and air to feed the turbines passes smoothly around them via channels in the structure of the body.

The design team combined designs from instrumentation in the new XJ saloon with those from fighter aircraft to create virtual 3D ‘gimbals’ around which the gauges wrap and rotate to provide status updates.

C-X75 stays true to the long-held Jaguar design philosophy of natural, flowing lines and simple, elegant forms.  The design team took their inspiration for the innovative engineering and functional design elements of cars like the 1950s C-type and D-type racers and unique 1966 XJ13.

The C-X75 was reviewed on the BBC Top Gear programme by Richard Hammond and James May.

The car on display in Coventry Transport Museum is the original concept car revealed at the Paris Motor Show in September 2010.