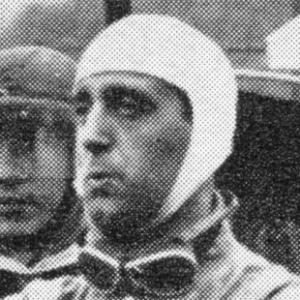 This C-type – chassis XKC045, registered as NDU 289 when built on 19 March 1953, is one of the later production cars, and unlike the 1953 Works cars which had the new disc brakes, it was still fitted with SU carburettors and drum brakes. 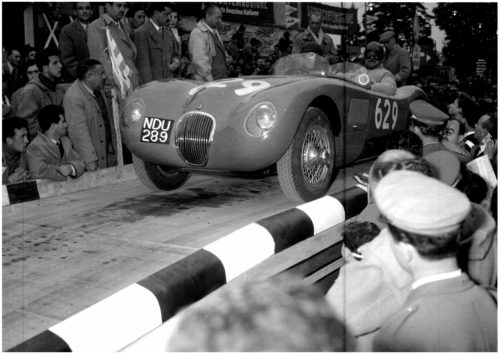 It was sold as a Personal Export Delivery and despatched on 10 April 1953 to the Italian racing driver Mario Tadini who entered it in the 1953 Mille Miglia.  Tadini had been racing in the Mille Miglia since 1930 with his highest previous finish as a 2nd place.  Sadly he and his co-driver Pietro Cagnana did not finish the race.

Mario Tadini was one of the major investors in the most famous team in motor racing history – Scuderia Ferrari.  This was conceived by chance over dinner on November 16 1929.  The idea was to form an organisation to run wealthy enthusiasts under the stewardship of sometime racer Enzo Ferrari.  Textile heirs Augusto and Alfredo Caniato backed the scheme along with Tadini whose money came from a chain of clothes shops he owned in Bologna. 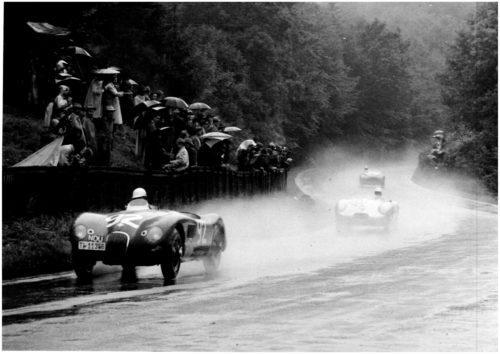 It was sold on a couple of times, first to Silvio Moser and then to Hans Maag and used mainly for hill climbs and some club level races. 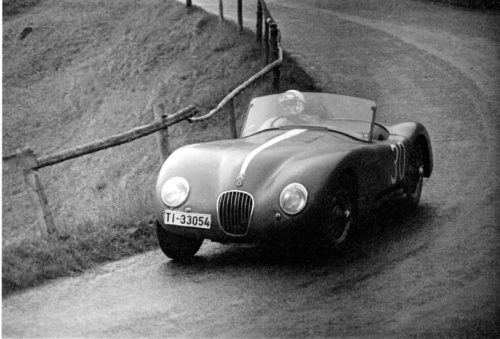 Sir Anthony Bamford bought NDU 289 and brought it back to the UK keeping it until 1970.   It was advertised in Motor Sport from July to September 1970, by David Mulvaney of Brian’s Classics in Didsbury, Manchester, described as rebuilt to concours condition.

It was bought by Mike ‘Bob’ Roberts the former owner of the Midland Motor Museum at Bridgnorth and was raced for Roberts by Mike Barker.

Sometime in the 1980s it was fitted with a new reproduction bonnet after the original was damaged racing.  The car was bought for the JDHT in 1983 and the original bonnet was acquired in 2000.  The car is normally on display in the Jaguar racing section in the main building of the British Motor Museum at Gaydon and the (lightly damaged) bonnet is mounted on the ‘mesh wall’ in the Collection Centre building.

The C-type brought Jaguar its first victory in the Le Mans 24-hour race.  The XK120 had demonstrated its abilities in racing, by finishing twelfth in the 1950 Le Mans race driven by Leslie Johnson.  It was clear that the company had the makings of a world-beater, so chief engineer William Heynes set to work to create a competition version – the XK120C, or C-type, primarily to race at Le Mans.

Using the XK120’s proven engine, transmission and front suspension, Heynes devised a more rigid, lightweight tubular chassis.  This was fitted with a handsome wind-cheating aluminium body, designed by Malcolm Sayer, the ex-Bristol Aircraft Company aerodynamicist.  The engine was tuned to 260 bhp, the brakes were improved, and the rear suspension now used transverse torsion bars.  The first cars were ready in the spring of 1951.

Almost immediately, three cars were entered at Le Mans.  During the race two cars retired but the third, driven by Peter Whitehead and Peter Walker, won at an average speed of 93 mph (150 km/h).  The C-type body was modified for the 1952 race, but all the team cars retired with cooling problems.

For the 1953 race Jaguar reverted to the original body design, albeit made of lighter gauge aluminium, and fitted the cars with the revolutionary disc brakes that Jaguar had been developing with Dunlop.  The three cars entered finished first, second and fourth.  The winners, Tony Rolt and Duncan Hamilton, averaged a speed of over 100 mph (161 km/h) for the first time in the history of the Le Mans race.

Although the C-type was a hand-built machine, it was listed in Jaguar’s sales catalogue (at a price of £2,327), and of the 53 cars built, 43 were sold to private owners. 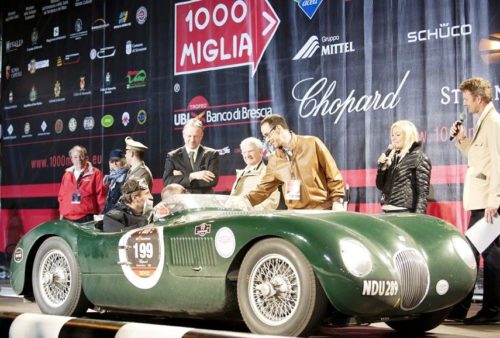 While NDU 289 is no longer raced, the JDHT keep it in running order and it has completed demonstration laps at a number of high profile events including Goodwood, Ennstal Classic and a couple of the Mille Miglia retrospective runs.